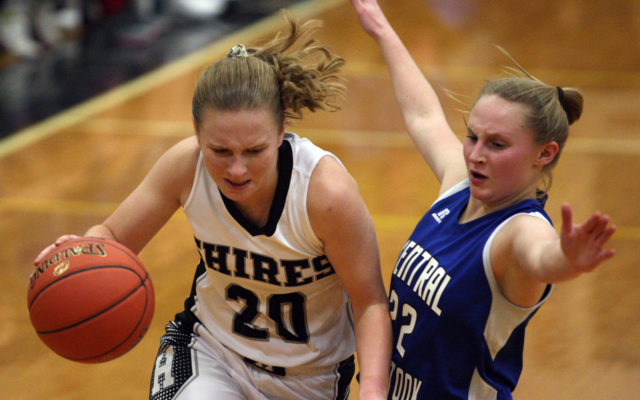 Joseph Cyr • January 10, 2020
Strong shooting from behind the 3-point arc, and a solid effort from the free throw line, made the difference for the Houlton girls basketball team in Wednesday's contest against Central Aroostook.

HOULTON, Maine — Strong shooting from behind the 3-point arc, and a solid effort from the free throw line, made the difference for the Houlton girls basketball team in Wednesday’s contest against Central Aroostook. 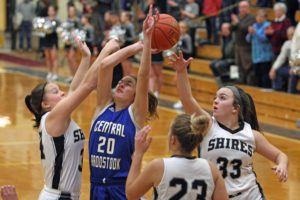 The Shires (7-4) received a 20-point effort from Mia Henderson that included three deep shots from behind the 3-point arc as Houlton held off a late surge by Central Aroostook for the 47-46 victory. Drew Warman chipped in nine points for the Shires, while Abbie Worthley had seven and Teagan Ewings added six.

“We took care of the ball and got the free throw line tonight,” Houlton coach Shawn Graham said. “Offensively, we were very good the first half, but struggled some in the second half. But our defense was much better in the second half.”

The Shires made six-of-nine free throws (67 percent) compared to just 5-of-13 (38 percent) from the Panthers.

Still, Central Aroostook found itself in a position to get the win at the end of the game. Following a missed free throw by Houlton’s Olivia Henderson with 12 seconds to go, Central Aroostook collected the rebound and Maci Beals launched a 3-point attempt at the buzzer bounced off the front of the rim. 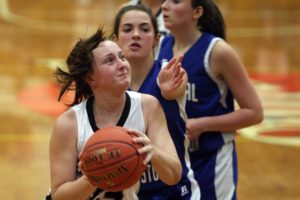 The win had huge implications on Houlton’s ranking in the Maine Heal Points Association as the victory bumped Houlton up to the No. 2 spot in the Class B North standings.

The Panthers (8-2) came into the game looking to avenge an earlier season loss to the Shires. Houlton is the only club to beat Central Aroostook thus far. Breann Bradbury led the Panthers with 14 points, while Libby Grass added 13 and Beals added nine.

“We’re well on our way to getting where we need to be,” Central Aroostook coach Dylan Kingsbury said. “Houlton is right in the mix in Class B and this [Houlton’s gym] is probably one of the toughest places to play in the state. I think we competed hard tonight.”

Halfway Home Pet Rescue in Caribou has partnered with the Houlton Humane Society shelter for a cat spay and neuter clinic on Saturday, May 30, and Sunday, May 31, in Houlton.
Campaign Corner END_OF_DOCUMENT_TOKEN_TO_BE_REPLACED