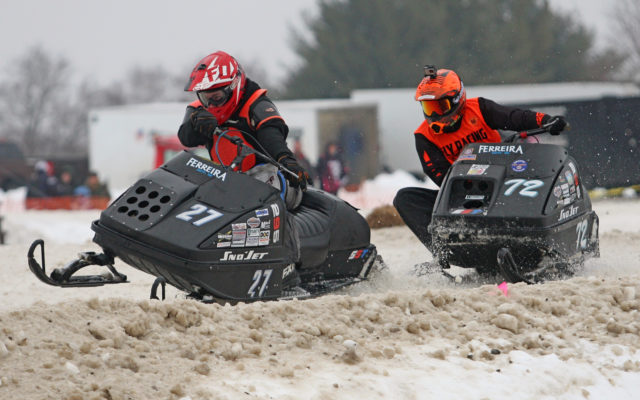 Joseph Cyr • January 14, 2020
The inaugural “Heartbeats and Handlebars” snowmobile racing event proved to be an overwhelming success Friday and Saturday in Houlton.

HOULTON, Maine — The inaugural “Heartbeats and Handlebars” snowmobile racing event proved to be an overwhelming success Friday and Saturday in Houlton.

The first race in the “Tame the Track” snowmobile racing series, approximately 160 sledders and another 200 spectators gathered at the man-made track behind the American Legion Chester L. Briggs Post No. 47 on the Bangor Road.

A rainy forecast for Saturday may have deterred some racers from making the trek north to Aroostook County to compete in the event, but about $10,000 was raised nonetheless.

Organized by the family, the event was held in memory Simon Cyr, a young boy from Houlton who died of complications from a congenital heart defect. Simon Cyr was the son of Levi and Michelle Cyr of Houlton. He was born Sept. 23, 2016, with a congenital heart defect and spent half of his young life in the hospital, including time spent both at the Barbara Bush Children’s Hospital in Portland and Boston Children’s Hospital.

He was just 17 months old when he died March 3, 2018. He left behind two siblings, Peyton and Aiden.

“We had a great crowd Friday evening, but Saturday’s rain kind of scared people away,” Michelle said. “We are planning on donating half of the $10,000 to CHD [Congenital Heart Disease] research and the other half will be used to start up our scholarship fund.”

A scholarship will be created in memory of her son and awarded to both traditional and non-traditional students who enter the medical field.

“We were overwhelmed by the outpouring of support,” Michelle said. “We were hoping to make a little bit the first year to start things up for our first year. It seemed to be well received and we hope to make it an annual event.”

“Handlebars and Heartbeats” is the first race in what is a series of races around the state, with sledders competing for cash prizes. Featuring a half-mile endurance course, the track featured lots of turns and inclines to challenge snowmobilers.

Saturday’s weather also proved challenging as the warm temperatures and rain made for a mushy course that slowed some of the racers.

Sarah Brownell of Ossipee, New Hampshire, was one of many parents of younger racers who made the trek north to the Shiretown for the event. She was one of a couple of parents from that area who came to Houlton. Brownell said she found out about the Houlton event through the “Tame the Track” Facebook page and didn’t hesitate to make the nearly 400-mile trip.

“This is the fourth year of racing for my daughter,”  she said. “She loves it, so wherever these races are, we will come.”

Brownell said the Houlton trip was not the farthest distance they have traveled. Last year, she brought her daughter to the series stop in Caribou and has plans to do the same this year.

Correction: An earlier version of this story said the event was organized by Jere Humphrey.