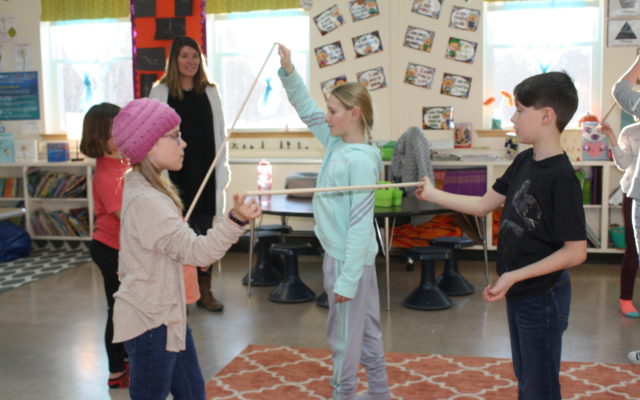 Mindfulness class teaches children how to stay focused, be aware of emotions

Melissa Lizotte • February 13, 2020
Just a few years ago Sharmon Clark, a second-grade teacher at Pine Street Elementary School, was searching for a way to better teach students how to manage their emotions and become more mindful.

PRESQUE ISLE, Maine — Just a few years ago Sharmon Clark, a second-grade teacher at Pine Street Elementary School, was searching for a way to better teach students how to manage their emotions and become more mindful of how emotions can affect themselves and others around them.

After doing more research, Clark discovered an array of activities devoted to teaching children mindfulness, a practice she describes as learning how to become aware of and focus on what’s happening in the present moment. It also teaches individuals how to calm and center themselves in order to respond to emotions in a healthy manner, she said.

Clark completed online courses through a program called Mindful Schools this past summer and began teaching after-school classes, one for kindergarten through grade two and another for grades three to five in fall 2019 as part of SAD 1’s Adult and Community Education program.

She continued with the six-week courses this semester and would like to possibly expand the curriculum to upper-level grades.

Both students and parents have responded to the mindfulness curriculum with great enthusiasm, she said.

During a class session on Wednesday, Feb. 12, students in the third to fifth grade group began with a partner activity in which two people hold a stick. Both partners must remain focused on the other and follow each other’s movements, all while not dropping the stick. With calm, soothing music playing in the background, students learn how to concentrate fully on one task and on the needs of the person they’re working with.

Students also took part in breathing and listening exercises. Each student closed their eyes and attempted to find their “anchor,” which Clark described as “the place that they feel their breath the most clearly.”

“Placing their hand there, either the belly, chest, or nostrils just above their upper lips, helps ‘anchor’ them to their breath,” Clark said.

To promote concentration and stress relief, they imagined themselves tracing the outline of their hands for two minutes. The goal was for students to not think about anything that had been bothering them during the day.

“If your mind wanders, that’s okay,” Clark told students. “What’s important is knowing that you’ve just had that thought and you bring your mind back to your breathing.”

The listening exercise were similar to the breathing activity, only this time students closed their eyes and focused on hearing sounds that they might not normally hear during the day — such as certain instruments on a music soundtrack or the low humming of the classroom’s heating system — for one minute.

Clark encouraged students to also practice “heartfulness,” a type of mindfulness in which they imagine someone they like and “send” kind thoughts to them. They do the same mind technique for someone they’re not happy with at the moment and then for themselves.

“We’re teaching students not just to be mindful of others but also themselves,” Clark said.

She ended the session with an activity called a “body scan,” in which students close their eyes and pay attention to how each major part of their body feels, starting with their toes, legs and knees and moving up to their stomach, arms, elbows and head.

The aim of the activity is to help students focus on one thing at a time and become aware of how their bodies feel at the moment.

Many students in the class talked about how much mindfulness has helped them in their everyday lives.

“It helps me when I get mad or stressed,” said Jillian Ouellette, a third-grader from Zippel Elementary School.

Samantha Argraves, also a Zippel third-grader, agreed that the mindfulness techniques help her calm down during more stressful moments.

“When I get stressed, it [mindfulness] helps me think that things are going to get better,” Argraves said.

Correction: An earlier version of this story and the photo caption misspelled Jillian Ouellette’s name.

Just when we thought we were out of the woods with kitten season, it has hit full force.  The past few days have been difficult answering the phone and hearing the stories of why people have litters of kittens they need to surrender.
Campaign Corner END_OF_DOCUMENT_TOKEN_TO_BE_REPLACED