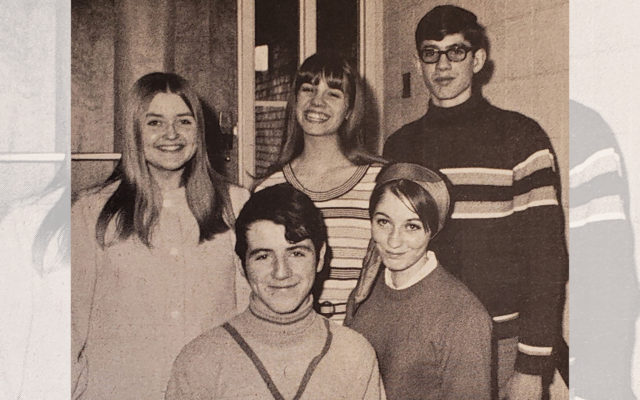 Yvonne Tardie • February 19, 2020
75 Years Ago - Feb. 22, 1945 Cast member in college production -- Nancy Kent, daughter of Mr. and Mrs. R. Kent of Presque Isle, and a sophomore at Beaver College, was selected as a member of the cast of “Inside Information” by Alice MacMillan, which was produced at the college on Feb. 22.

Cast member in college production — Nancy Kent, daughter of Mr. and Mrs. R. Kent of Presque Isle, and a sophomore at Beaver College, was selected as a member of the cast of “Inside Information” by Alice MacMillan, which was produced at the college on Feb. 22.

The production was one of four one-act plays presented by the four classes of the college in competition.

Rotary Club birthday — The 40th birthday of Rotary International was observed by the Presque Isle Rotary Club in a special program which included a history of the local club by Secretary Fred P. Stevens. Secretary Stevens described the chronicle of events which have transpired in the local club since its organization. Past District Governor Tom Cornish have a talk on the history of Rotary International. The speakers were introduced by R. Kent, chairman of the entertainment committee.

Airport funds approved — Presque Isle Municipal Airport will receive $178,350 as the result of an appropriation requested from the special session of the 104th Legislature. The state funds were to be matched by federal monies in order to complete the rehabilitation of the airport. Burtt Brown, chairman of the City Council, said that with the completion of the work allowed by these funds, Presque Isle will rank as one of three major airports in the state.

Young Farmer’s seminar successful — The 7th annual Potato Seminar sponsored by Central Aroostook Young Farmers Association concluded with a banquet in celebration of this organization’s 25th year. Gordon Conklin spoke on the importance of the farmers having increased bargaining power and reminded farmers that had to decide whether they will continue to have a high degree of independence or be part of an organized farm group much the same as organized labor unions. Mr. Conklin indicated that it was difficult to have both.

Clean Up-Fix Up Award — Presque Isle received an honorable mention award in the nationwide Clean-Up-Fix-Up contest, sponsored by the National Clean Up – Fix Up Bureau. The award was received by city manager Dana Connors and Aubrey Briggs, executive manager of the Presque Isle Area Chamber of Commerce, as they represented the city at the National Congress on Beautification in Washington, D.C.

Emerging talent — Writer Caitlin Wallace, a seventh-grader at Cunningham Middle School, received a certificate of achievement and a gift pack Thursday night from CMS language arts teacher Marilyn Allen and Pieces of Eight owner Florence Zettergren. Wallace’s literary work, “Brandy,” and those of her 80-plus peers, was recognized during an Authors’ Celebration at the school. More than 150 parents, friends and members of the community shared in the culmination of the one and one-half month project, which had CMS seventh-graders write and illustrate their own stories.

UMS trustees approved Aroostook scholarship — University of Maine Foundation officials announced that the University of Maine Board of Trustees approved the establishment of the Owen H. Smith Scholarship Fund. The scholarship, which benefits Aroostook County high school graduates, was established by Penny S. Harris of Bangor, in honor of her father, who graduated from the University of Maine at Orono in 1941 with a degree in agronomy. Smith had provided more than 40 years of community service and leadership. He had served on the Maine Potato Growers Inc. Board of Directors and as president of the Maine Cooperative Extension Association and the Presque Isle Rotary Club.

Halfway Home Pet Rescue in Caribou has partnered with the Houlton Humane Society shelter for a cat spay and neuter clinic on Saturday, May 30, and Sunday, May 31, in Houlton.
Campaign Corner END_OF_DOCUMENT_TOKEN_TO_BE_REPLACED