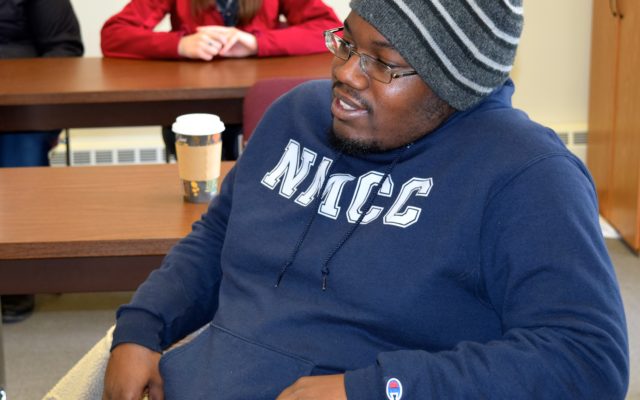 After completing the CNA course, Funches pushed through the culinary arts program. As he pondered what to do next, he decided that he wanted a change.

“I wanted to experience a new environment.” Joshua chose Northern Maine Community College because it was accessible and offered the program he wanted to study, early childhood education (ECE).

Joshua’s upbringing influenced his interest in working with children. “Women ruled the household. They were the breadwinners and the nurturers.” While watching the adults care for his siblings and cousins, Joshua wanted to help. “I thought I should take care of them too.”

Joshua helped with the household duties and learned how to cook, clean, sew and stitch, skills he learned from his great aunt.

Joshua knew he wanted to pursue a career in early childhood education during his senior year of high school when he took his first childhood development class. He was also the only male student. “I enjoyed it. I thought it was odd that other males didn’t have the same desire as I did to work with children. We should all learn how to take care of children.”

Joshua is learning something new every day in his college program. He also appreciates how his instructors and peers value his opinion.

“Being the only male in the class, I am asked my opinion on certain matters.”

Joshua is currently completing the field experience requirement of the program at Little Feathers Head Start in Presque Isle. “Working with the kids is enlightening and fun. It’s very fulfilling.”

When Joshua graduates with his associate’s ECE degree in May of 2018, he wants to become a foster parent.

“In today’s society, many children are in the foster care system who need caring parents in order to thrive. If I can help one child, that is one soul that I am aiding.”

Joshua also has an interest in holistic medicine and using natural remedies to treat various ailments and has dreams of pursuing a medical degree someday.

Men have strengths they can contribute to the field including helping children develop leadership skills, according to Funches. In addition, he believes children could benefit from having a positive relationship with a male figure.

“Having a male role model in their life might be something that they are missing out on.”

As more women are entering the workforce, Josh feels that more men should take on nurturing roles.

Unfortunately, men may face challenges when entering the ECE profession. According to Joshua, their sexuality or motive for wanting to work with children might be questioned, which can deter men from pursuing a career in the field.

“People may ask, ‘Why don’t you have a more masculine job?’ Men may lack the moral support needed to make that decision.”

Although Joshua credits his native religion, upbringing, and support system for where he is today, he states that he initially encountered some resistance from family and peers. “They questioned why a man of color would want to take care of children.” He believes that gender and race are irrelevant, especially to a child, and feels that children are naturally accepting of people’s differences.

Joshua offers advice for males considering a career in ECE. “Don’t be self-conscious. If you feel you’re not doing something right, talk to your supervisor and ask for advice.” It is also important to be healthy and to take the proper precautions to avoid getting sick. “Boost your immunity.”

Joshua offers additional words of wisdom. “Watch and learn. Patience is a virtue.”