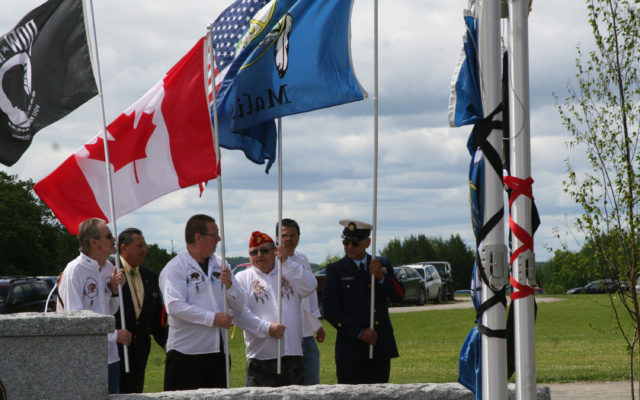 Contributed • June 21, 2017
On June 14, the Houlton Band of Maliseet Indians gathered to dedicate a veterans monument and veterans section of their tribal cemetery Metahksonikqewi Puskonihkukm, which translates to Meduxnekeag Overlook Tribal Cemetery.

HOULTON, Maine — On June 14, the Houlton Band of Maliseet Indians gathered to dedicate a veterans monument and veterans section of their tribal cemetery Metahksonikqewi Puskonihkukm, which translates to Meduxnekeag Overlook Tribal Cemetery.

“The tribal cemetery officially opened with its first burial in the fall of 2016,” said Susan Young, resources/real estate director for the Houlton Band of Maliseet Indians. “The cemetery project began many years ago under the tenure of former Tribal Chief Brenda Commander. The dream of a tribal cemetery was an important goal for the community.”

Without an existing tribal church to help guide the way, members of the original cemetery committee and others in the community worked many hours picking a suitable site, and developing ordinances that would guide the governance of the tribal cemetery into the future, Young stated.

Located on the Skijin Road, a veterans section was always part of the cemetery plan, but it was a grant from the U.S. Veterans Administration’s National Cemetery Program that helped make the veterans monument a reality, Young said.

“The beautiful granite monument, located in the northern section of the cemetery, honors tribal veterans of the five branches of the United States Armed Forces — Air Force, Army, Coast Guard, Marine Corps and Navy,” Young said. “Construction on the monument was completed just days before the dedication ceremony and the monument was kept covered until the morning of the dedication. Seeing the uncovered monument for the first time the morning of the dedication, added an extra level of excitement to the ceremony.”

Elder Imelda Perley offered an opening prayer and song, while accompanied by tribal member Amy Joseph on drum. Elder Dolores Crofton-MacDonald blessed the monument and all in attendance.

Tribal Chief Clarissa Sabattis spoke of the importance of the cemetery to the tribal community and of the monument to all the veterans, who served and continue to serve, and their families.

Honor guard members John Joseph Jr., Henry Bear and David Slagger stepped forward to raise the United States, Maliseet and POW/MIA flags on the flagpoles that guard the monument. They were then joined by the remaining members of the honor guard to place cedar wreaths made by elders and cemetery commission members, Rose Tomah, Brenda Commander and Dolores Crofton-MacDonald.

Following the placement of the wreaths, Chief Sabattis read aloud the Maliseet Honor Roll honoring tribal veterans from both the U.S. and Canada. Veterans and family members of deceased veterans were presented with hand-made leather pouches containing the four sacred medicines as a thank you from the community.

He also announced that the Maliseet tribal veterans cemetery is the first one located east of the Mississippi River.

The tribal cemetery and veterans monument was designed by Coplon Associates of Bar Harbor. Atlantic Landscape Construction of Ellsworth did the groundwork and monument installation. Brown Development of Houlton completed the roadwork for the cemetery.

Susannah Wright, the social services director for the Houlton tribe serves as the cemetery superintendent and Heidi Kelley, the band’s enrollment clerk, maintains the cemetery records. Young served as project manager and liaison for tribe to the Veterans Administration.