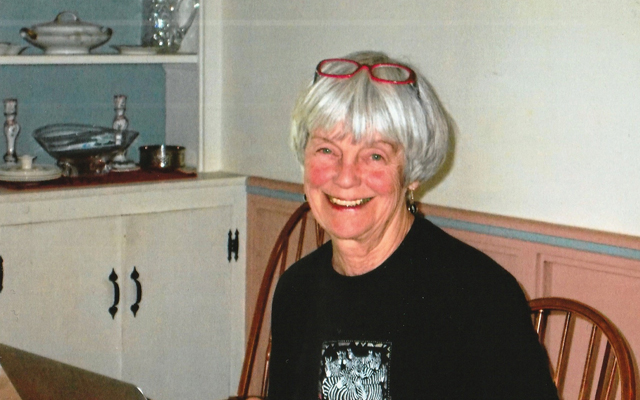 Melissa Lizotte, Special to The County • August 24, 2017
Kathryn Olmstead of Caribou is “from away.” She grew up in Michigan and did not end up in northern Maine until later in her adult life.

Kathryn Olmstead of Caribou is “from away.”  She grew up in Michigan and did not end up in northern Maine until later in her adult life.  She has been a journalist, teacher and editor of the now defunct “Echoes” magazine, but no matter what she’s done in her career, she most values the roles of friend and community member.

Olmstead first came to Maine in 1973.  She and her then-husband, who was Swedish, had taken trips to Sweden and Quebec to learn about his family roots.  They drove through Maine on their way home to New Hampshire and saw a sign for the town of New Sweden.  They visited the town and later met a couple who owned a vacation home in nearby Westmanland, and became fast friends.

Not long afterwards Olmstead and her husband discovered an abandoned farm property in Westmanland.  They moved there from Concord, N.H., in 1974 to get away from the city and be where they could live off the land.  Though they weren’t local, Olmstead remembers that their neighbors were very welcoming and glad to see young people move into the old farmhouse.  No one had lived there for 17 years.

“We visited our next-door neighbor and the lady said, ‘Oh, I wish you could’ve seen the house before,’” Olmstead said.  “She appreciated that we were putting the farm back together and she told us stories about the family who lived in the house.”

After Olmstead and her husband divorced in 1976, she became a reporter, then the editor, for Caribou’s Aroostook Republican newspaper. She went on to run Senator Bill Cohen’s district office in Presque Isle until 1984.  She joined the journalism faculty at the University of Maine at Orono that same year.

The faculty position changed Olmstead’s life in many ways.  She enjoyed teaching at the college level, but had to give up two freelance journalism jobs to focus on academic research.  After three years, she considered resigning from the university.

At the time Olmstead had also been talking with Maine’s commissioner of agriculture, who had been a frequent source for her freelance agricultural journalism, and suggested he hire a press secretary. She wrote the job description, held workshops for staff members and was set to become the commissioner’s first press secretary.

But then she met Gordon Hammond, an Aroostook County transplant from Long Island, N.Y., and abandoned that career move.

Hammond’s local advertising agency had designed and published a brochure for the Chambers of Commerce of Aroostook County, which many people assumed was a magazine.  Olmstead and Hammond had an idea to start their own magazine about rural values in Aroostook County.  They published a pilot issue to get subscribers and then put out the first quarterly issue of Echoes in July 1988.

“We wanted to celebrate the values of a place like Aroostook and create a sense of identity and pride,” Olmstead said.  “There’s value in knowing where we’re from and it’s not just about nostalgia.  It’s thinking about the future and applying values that are useful to our society.”

Olmstead decided not to resign from UMO, but took a yearlong leave of absence.  In the end, Echoes and teaching at Orono gave Olmstead great careers in journalism and academia.  She later earned tenure as a journalism professor and commuted to Aroostook County on the weekends to serve as Echoes’ editor and manage its production.

Throughout her career, Olmstead has most enjoyed “cultural journalism,” writing about how culture and history have shaped the people who live in rural northern Maine.  She will miss the community connections the magazine formed with people both in and outside Aroostook County.

Once, Olmstead received numerous subscription orders from people in San Bernardino, Calif., and spoke to one of the subscribers on the phone.

“She said, ‘We have an Aroostook County club that meets out here and someone brought Echoes,’” Olmstead said.  “Where else in the U.S. do people gather because they’re from a place?  It seems that the further away people are, the stronger their ties are to their home.”

Gubernatorial candidate John Glowa said that he wants to spur government reform that truly creates a system of, by and for the people when he visited Presque Isle City Hall.
Pets END_OF_DOCUMENT_TOKEN_TO_BE_REPLACED

Many of you have been asking about our super popular “Toast to the Animals” celebration. After several COVID-19 cancellations and not being able to host this great fundraiser, we are finally ready to celebrate the animals once again and help support the Central Aroostook Humane Society.
What's Happening This Week END_OF_DOCUMENT_TOKEN_TO_BE_REPLACED