Contributed • October 5, 2017
After a summer “out of orbit” for re-painting, the Planet Jupiter will return to its spot in the Maine Solar System Model on Friday morning, Oct. 6. 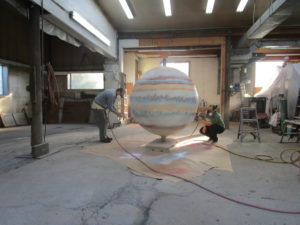 Christine Akridge and Kevin McCartney working on the repainting of Jupiter. As with all matters that concern the largest solar system model in the Western Hemisphere, all work is done by the Community of Northern Maine. (Courtesy of UMPI)

PRESQUE ISLE, Maine — After a summer “out of orbit” for repainting, the planet Jupiter has returned to its spot in the Maine Solar System Model.

Replaced on Friday morning, Oct. 6, the planet is one of the most easily-spotted features of the Maine Solar System Model, which stretches from the University of Maine at Presque Isle to Topsfield. It is located 5.2 miles from the sun, which is housed at UMPI.

“We originally planned to have this down for only a few weeks,” Kevin McCartney, coordinator for the model, said. “However, 15 northern Maine winters had caused considerable deterioration of the northern hemisphere fiberglass surface and more maintenance was needed than originally anticipated.”

Work on the planet took most of the summer, with delays mainly due to the busy schedules of local companies that donated labor to complete the project. The entire solar system model, which remains the largest in the Americas, was built by the community of Northern Maine, with participation from many local individuals and companies. Maintenance of the model components will occur through the same process, with a zero budget.

McCartney said the model serves as a well-appreciated testament to the Northern Maine community, because everything associated with it is the work of many people.

The Jupiter site is no exception, with the students of four Aroostook County schools involved in the original construction. Langille Construction of Washburn worked to take the planet down for maintenance and put it back in “orbit,” while Dan Robertson transported it to and from Beaulieu’s Garage and Auto Shop in Caribou. Advance Auto Parts provided paint and materials for the recent work on the planet. Larry and Nancy Fletcher of Mars Hill mow the ground around Jupiter and some other planets. 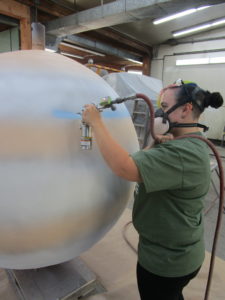 Christine Akridge (Stutterbug Studios) painting a portion of the Jupiter northern hemisphere in the old Beaulieu’s garage. The planet has been “out of orbit” for the summer for maintenance of the fiberglass cover and repainting. (Courtesy of UMPI)

For its restoration, the planet’s entire surface was recovered in fiberglass and sanded.

“We have learned a few things about the effects of weathering here, and I hope that the new cover and paint can last another 25 years,” Jeff Robertson, manager at Beaulieu’s, said.

Colin Patterson and Rick Canterbury repaired the globe and applied initial primer. Since the house paint that covered the planet for 15 years, as it sat in its spot along Route 1, had not held up very well, the decision was made to use fiberglass, which should last much longer.

“We tried to draw in some of the complicated atmospheric turbidity that characterizes the surface of Jupiter,” Jones said.

Special attention was given to the Great Red Spot, which has been known for more than 350 years and takes six days to rotate around the planet. Sam Robertson added the final clear coats that cover the paint.

Painting Jupiter presents a special challenge, as this planet has perhaps the greatest variation of color, at least seen from a distance.

“This banded pattern seems to be connected to the height and temperature of the clouds,” Jim Stepp, local astronomy enthusiast, said.

Lighter-colored clouds are higher and cooler, with darker clouds being lower and warmer. The planet is covered with storms that show up as red, white and brown spots, often on a white background. Those who painted the planet tried to reproduce that effect.

The Maine Solar System Model was built over a period of four years, from 1999 to 2003, with dwarf planets added in 2008. Established by the University of Maine at Presque Isle, the Northern Maine Museum of Science, and the northern Maine community, it is the largest solar system model in the Western Hemisphere, with both the planet diameters and distances from the Sun set to a scale of one mile equal to an astronomical unit (AU, the distance from the Sun to Earth). The model consists of a 50-foot diameter Sun and extends 95 miles to the dwarf planet Eris, which is about one inch in diameter, in Topsfield.

“Tourists are often very curious and want to learn more about the model,” Theresa Fowler, executive director of the Central Aroostook Chamber of Commerce, said.

“At the Houlton Visitor’s Center, we see a number of tourists who have traveled to the region just to see the Solar System Model,” Kathy Hogan, manager of the center, added.

Maintenance to Saturn and Neptune will likely be needed over the next several years, and construction of posts and bases are needed for two more recently recognized dwarf planets, to be located north of Caribou.

For more information, about the Maine Solar System Model, contact UMPI’s Community and Media Relations Office at 768-9452 or umpi@maine.edu.

A familiar face to Aroostook County residents has announced her candidacy for the Maine State Senate.
Pets END_OF_DOCUMENT_TOKEN_TO_BE_REPLACED

One addition to last week’s “Kindness abounds” story on the generosity of local area youth: Just last week, 11-year-old Michaela stopped by the shelter armed with bags of dog and cat food and special treats.
What's Happening This Week END_OF_DOCUMENT_TOKEN_TO_BE_REPLACED