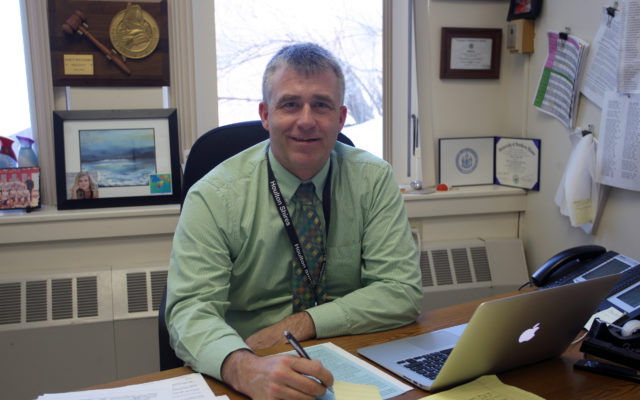 Joseph Cyr • April 3, 2018
Marty Bouchard, Houlton High School’s principal for the past 14 years, announced Monday that he was stepping down from his post at the end of the school year.

HOULTON, Maine — Marty Bouchard, Houlton High School’s principal for the past 14 years, announced Monday that he was stepping down from his post at the end of the school year.

Bouchard presented his resignation to the RSU 29 school board during Monday night’s regular monthly meeting.

Citing a desire to be closer to his children, Bouchard said Monday afternoon that leaving Houlton Middle-High School was not an easy decision for him or his family. He was unanimously approved Monday evening as principal of The Middle School of the Kennebunks (RSU 21) in Kennebunk.

Bouchard’s wife Karen, a language arts teacher at Houlton Middle-High School, also is expected to step down from her position as the family plans to sell their home in Houlton and relocate to southern Maine at some point this summer.

“It has been a really difficult decision for our family,” he said. “We are a close family, so being in close proximity to our children is very important to Karen and I. But it’s hard for both of us. Karen has taught here in the district for 23 years.”

The Bouchard’s son Kyle, a 2015 graduate of Houlton, is enrolled at Bentley University in Waltham, Massachusetts. Their daughter Kolleen, a senior at Houlton, also will attend Bentley this fall.

Being able to watch their children play basketball while in college was a strong motivating factor he said.

“We’ll be less than 90 minutes to their home games,” he said.

Reflecting on his time at HMHS, Bouchard said he was proud of what the team of teachers and administrators has accomplished.

“I think the staff has helped to create a very safe and productive learning environment,” Bouchard said. “We have helped a lot of youngsters over their years reach their individual goals, whether it be to attend a high-level four-year college or to transition into a successful career in the community. We have worked really hard to make this a positive climate for kids to attend a rigorous and high-level school. I am proud of that fact.”

Bouchard then left education for a short time as he worked for the Bureau of Mental Retardation in Presque Isle before he returned to teaching when a physical education/health position opened at Hodgdon in 1996.

Bouchard became assistant principal/athletic director for Hodgdon in 2002 and obtained his master’s degree from the University of Southern Maine in 2004, at which point he became the high school principal at Houlton.

He also is a past president of the Maine Principals’ Association.

Among the many challenges in his new position will be learning the names of the roughly 552 students in grades 6-8 at The Middle School of the Kennebunks. Knowing the names of each and every student that walked the halls of Houlton is something Bouchard has taken pride in.

“One thing I have tried over the years is to get to know the kids in my school,” he said. “That way you can better support them. I always wanted the kids to know that I knew who they were and that I cared about them.”

Maine is more than eight months into Medicaid expansion under the federal Affordable Care Act and trends around who is enrolling and where they live are starting to emerge, bucking some expectations and pointing out access challenges.
Pets END_OF_DOCUMENT_TOKEN_TO_BE_REPLACED