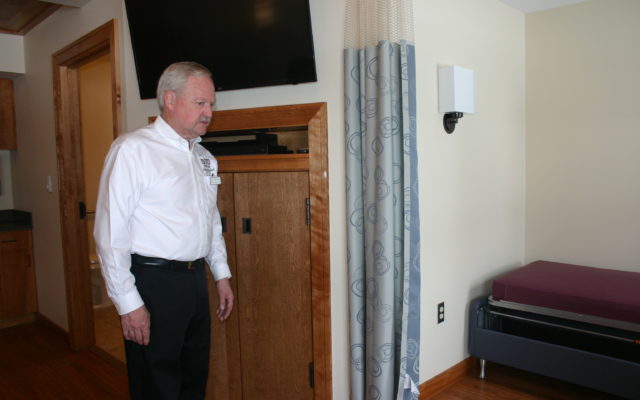 Fundraising efforts for the Aroostook House of Comfort began in May 2009 and were spearheaded by Rick and Nancy Duncan and Dirk and Sharon Duncan, all of Presque Isle. After Rick Duncan’s mother passed away, he and his wife decided that people in Aroostook County should have access to hospice care that allows them to live in a homelike environment during the final months of their life.

The Duncans established the Aroostook Hospice Foundation, a 501C3 nonprofit organization, with the initial memorial donations from Rick Duncan’s mother. They spent many years afterward raising funds and looking at several property options that ultimately did not fit the needs of a potential hospice home. Three years ago they learned about a building and 15 acres of land on 18 Green Hill Drive after the owner, Michael Scarks, reached out to the Duncans. Scarks had purchased the property for his company, Boulos Reality, a few years prior but had never found use for the space.

“A few days before Michael was set to meet with Rick and Mike MacDonald, one of our foundation members, he passed away suddenly and for awhile we thought we would not be able to pursue this property,” Nancy Duncan said. “But Michael had made it clear to his wife and business partner that he wanted us to have the property for a hospice home.” 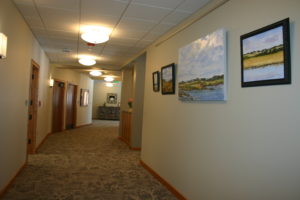 Each month, the Aroostook House of Comfort, pictured here during an April 7 open house, will feature the work of a local artist on one of the facility’s walls. This month’s featured artist is Filomena Irving of Washburn. (Melissa Lizotte)

Thus the Aroostook Hospice Foundation was able to buy the property with the building which will be managed as a hospice facility by Visiting Nurses of Aroostook, a home-based nursing service that is part of Eastern Maine Healthcare Systems. During renovations, 2,500 square feet was added to the front portion of the structure to include an open-concept dining area, living room, children’s play area, conference room and front porch.

Rick Duncan and members of the Aroostook Hospice Foundation’s board of directors and advisory board as well as officials from VNA were on hand during the open house to give tours to visitors.

Duncan pointed out that all 6 bedrooms feature a common area for family members to sit, a microwave and refrigerator, wheelchair-accessible bathrooms and showers and couches and chairs that fold out into small beds for family members who want to spend the night. Each patient’s bed is positioned so that he or she gets the best views of the outdoors.

The facility’s outdoor space currently has a memorial garden and the Duncans hope to eventually create walking trails on the property.

“We wanted the home to be a place that not only puts the patients’ needs first but also the families’ needs,” Rick Duncan said. “The rooms are spacious and accessible for any family members who want to stay the night here or just want a quiet space to reflect.”

Aroostook Hospice Foundation and VNA expect to begin serving patients on May 7. Patients who receive hospice care will have been diagnosed with a life expectancy of 6 months or less and will receive a “comfort approach” to symptom management and end-of-life care. The facility will employ both in-house and traveling nurses, doctors, social workers, and CNAs. There are offices on site for VNA staff members, and regular volunteers also will be on hand to assist patients.

The day before the open house, individuals from the board of directors and advisory board and members of the public gathered in the chapel as Bishop Robert Deeley of the Roman Catholic Diocese of Portland performed a blessing ceremony for the facility. The Diocese donated a three-piece stained glass window to Aroostook Hospice Foundation in 2015.

Thus far the center panel has been installed in the chapel, with the two remaining panels to be installed on both the left and right sides of the wall.

“The window panel you see here features Jesus Christ instructing his disciples to go forth and teach all nations,” Sue Bernard, Aroostook House of Comfort advisory board member, said before the bishop’s blessing. “His disciples are on the other two panels of the window and they’ll be placed in shadow boxes along each wall.”

“It’s a pleasure to be here,” Deeley told the small crowd. “I love visiting Aroostook County and I’m thrilled with what you all have done to give people comfort in this place. Today is a celebration of the goodness of community and those who have helped make the home what it is today.” 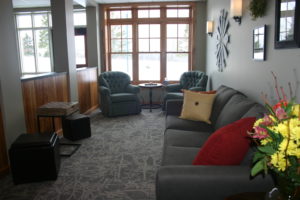 The Aroostook House of Comfort includes many common areas for families, including this one pictured with a view of the home’s memorial garden. (Melissa Lizotte)

The home received a warm welcome from community members, who praised the open, comfortable atmosphere and the spaces available to patients and family members.

“My brother, Alan Brown, passed away in York, Pennsylvania, two days before Christmas last year and he had been staying in a comfort house much like this one,” Debbie Day, of Presque Isle, said during Saturday’s open house. Day’s family donated several of Brown’s books and lighthouse figurines to Aroostook House of Comfort. “This is where I would have wanted him to be if he had been living up here.”

Aroostook Hospice Foundation members will continue to raise funds to support the facility’s operation and have plans to hold many fundraising events in the future. They also will maintain an endowment fund to support patients who might not normally qualify for hospice care due to Medicare and Medicaid insurance guidelines.

Rick Duncan credits the numerous community members and organizations who have donated money, materials and time to help make the home a reality for County families.

“The community support that we’ve received has been amazing from the beginning,” he said. “We are, in essence, a philanthropy organization and we’ll continue to fundraise and rely on support from our communities.” 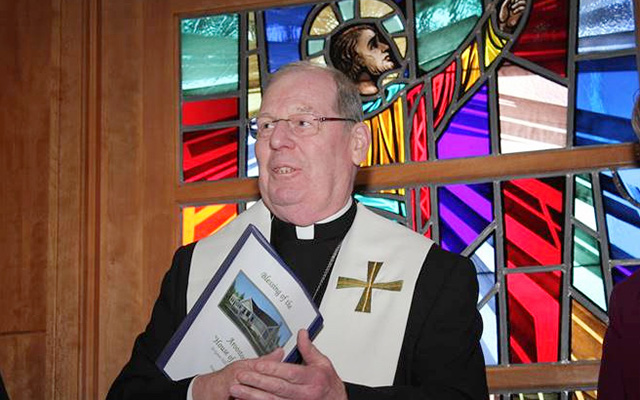 Bishop Robert P. Deeley of the Roman Catholic Diocese of Portland speaks in front of the stained glass window in the chapel of the Aroostook House of Comfort on Friday, April 6. The bishop came to Presque Isle to bless the facility as it marked its grand opening. (Courtesy of Diocese of Portland) 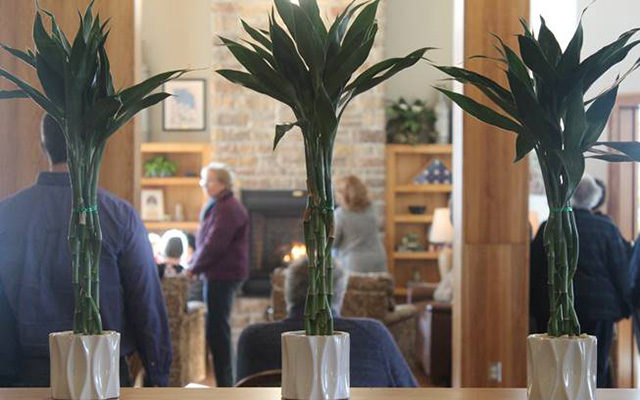 The Aroostook House of Comfort in Presque Isle celebrated its official opening Friday, April 6. Visitors gathered for tours of the facility. (Courtesy of Diocese of Portland) 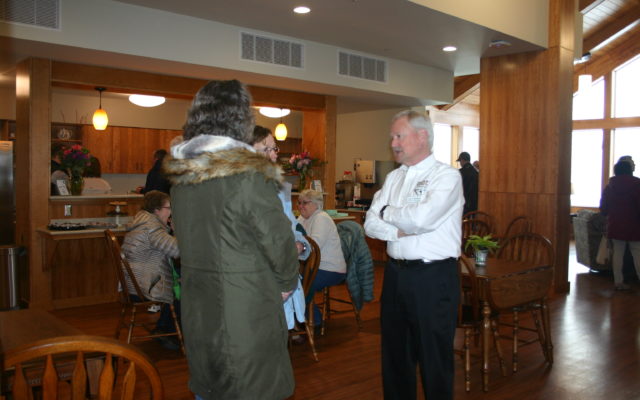 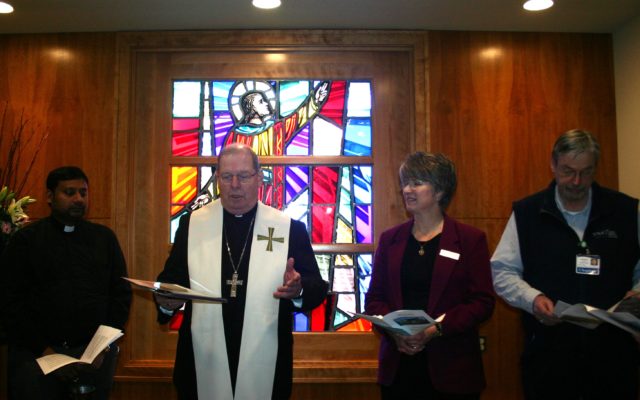 Bishop Robert Deeley (center) of the Roman Catholic Diocese of Portland, performs a blessing ceremony for the Aroostook House of Comfort chapel on Friday, April 6, as Father Nehru Stephen Savayaria, of Parish of the Precious Blood in Caribou, Sue Bernard, Aroostook House of Comfort advisory board member, and George MacLaughin, the facilty’s chaplain, look on. (Courtesy of Melissa Lizotte)

For all it does to refresh us, burn energy and keep us sharp, we all need playtime, dogs and cats included. Sharing playtime with pets has the added benefit of strengthening the bond between us, so we better understand one another.
Campaign Corner END_OF_DOCUMENT_TOKEN_TO_BE_REPLACED