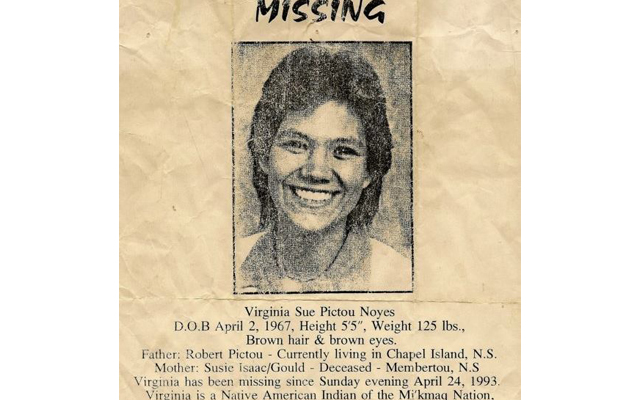 Melissa Lizotte • April 24, 2018
The last time anyone reported seeing Virginia Sue Pictou-Noyes was at a gas station in Houlton on the morning of April 24, 1993.

PRESQUE ISLE, Maine –The last time anyone reported seeing Virginia Sue Pictou-Noyes was at a gas station in Houlton on the morning of April 24, 1993. Pictou-Noyes, 26, had snuck out of Eastern Maine Medical Center in Bangor at around 1 a.m. that day, desperate to get home to her five children in Easton.

Pictou-Noyes had been hospitalized hours before after police said that she, her husband, Larry Noyes, and his brother, Roger Noyes, Jr., “got extremely intoxicated” and the two men assaulted her outside a Bangor bar. Larry Noyes was arrested for domestic assault and she was taken to EMMC. 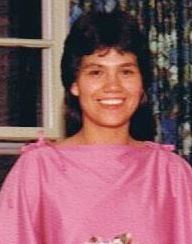 According to an article published in the Bangor Daily News in 2012, Maine State Police detectives said that Pictou-Noyes left the hospital before her checkup was complete after repeatedly telling officers that she needed to get home to her five children.  Detectives believe she was able to reach Houlton before she made phone calls trying to get a ride home.

No one has seen her since that day 25 years ago.

Pictou-Noyes’ family has spent those years trying to put the pieces of her final day together.

“The first night after she went missing, my brother David and I literally drove up and down I-95 to measure the time it might take to walk or ride from Bangor to Houlton,” Pictou-Noyes’ sister Agnes Gould said at a press conference she and other members of her family held on April 20 to mark the 25th anniversary of her disappearance.

“Then we drove that same route again, stopping at every rest area, every turnoff and truck stop along the way. We did the same thing from Houlton to Mars Hill to Presque Isle to Easton,” Gould said.

The night before Gould’s sister went missing, Larry Noyes was charged with domestic assault and taken to Penobscot County Jail while Roger Noyes Jr. was issued a summons on an assault charge for his role in the alleged beating of Pictou-Noyes outside the Bangor bar. Larry Noyes was able to make bail and the charges against both men were dropped after Pictou-Noyes disappeared.

Gould recalled that her sister often confided in her about the abuse she allegedly endured at the hands of her husband, Larry Noyes, and tried to leave him on multiple occasions.

“She would call me and I would come pick up her and the children,” said Gould, who at the time was an outreach caseworker and spiritual leader for the Aroostook Band of Micmacs in Presque Isle. “They would live with me for a few weeks, then her abuser would come and say, ‘I’m sorry, babe. I won’t do that again. Come home.’ Then I would get a call from her a few weeks later, saying that the beatings had gotten worse.” 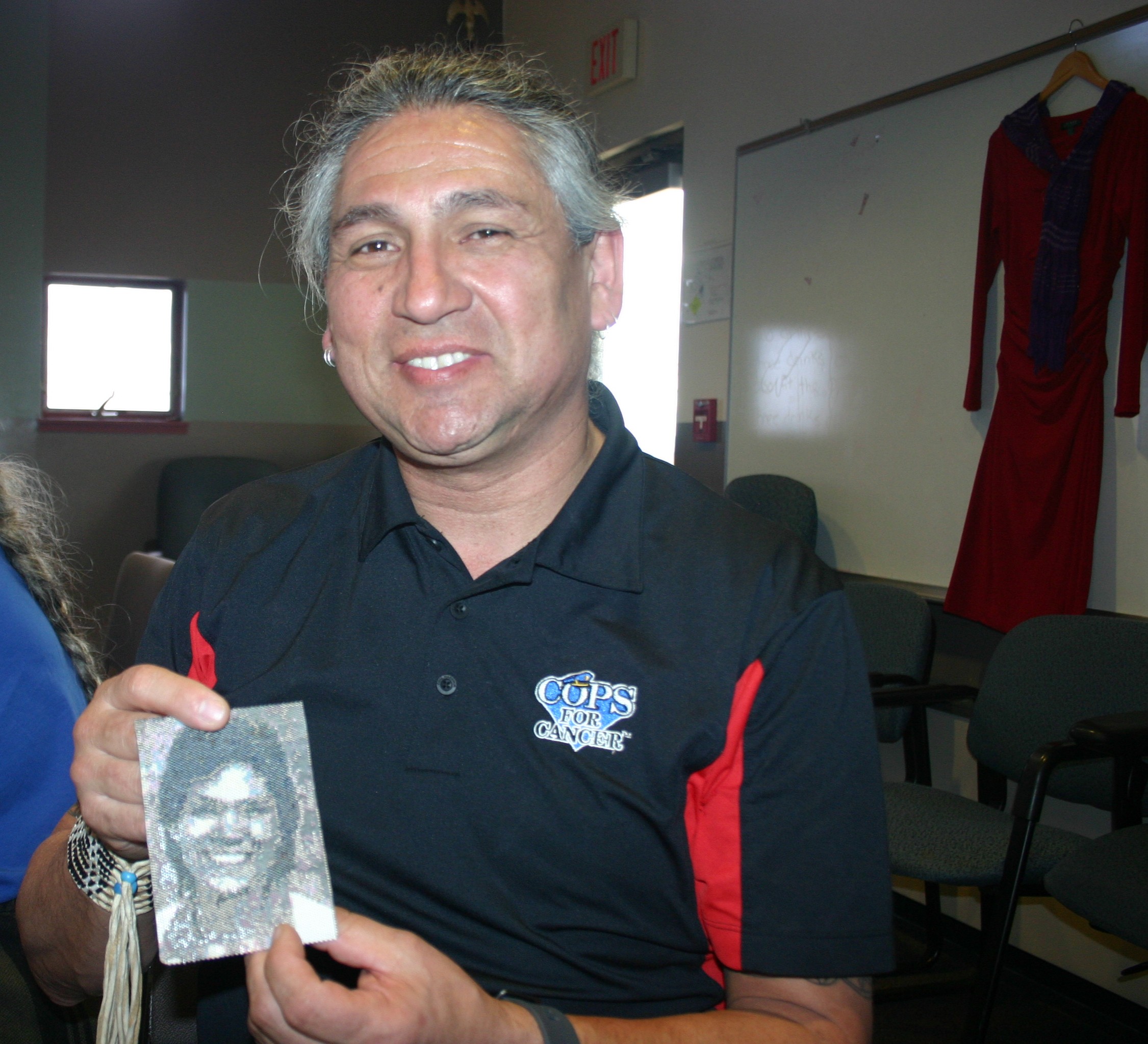 During a press conference held April 20 in Presque Isle to commemorate the 25th anniversary of the disappearance of Virginia Sue Pictou-Noyes, her older brother holds an image of his sister that he made from beads based on her driver’s license photo. (Melissa Lizotte)

Pictou-Noyes was one of 13 children in the family. Francis Pictou remembers his sister as someone who was “loving, caring and nurturing” from a young age, qualities that made her a dedicated mother.

“She and I played together all the time when we were children and she was protective of us even at age six. When someone did something wrong to any of her brothers, she got her nose in it,” Francis Pictou said, smiling as he recalled childhood memories.

Pictou also remembered the enormous tragedy his sister suffered after losing two of her children in a trailer fire in Fort Fairfield in October 1990. Fire engulfed the trailer in three minutes and Pictou-Noyes lowered her other children out a window but was unable to get to her two youngest children, Ashley Sue Noyes, 2 ½ and Jesse James Pictou, 17 months, because heavy smoke had consumed the rest of the home.

“That’s how I know Virginia didn’t leave by her own will,” he said, referring to what she did to save her children and her subsequent disappearance. “She would not have left her children. She wanted to get back to them.”

After Pictou-Noyes disappeared, Gould created a missing person flyer of her sister and has distributed that flyer to individuals in both the United States and Canada throughout the last 25 years. She and family members have conducted numerous searches on foot, fueled by the belief that her death involved foul play and that she is no longer living.

“We’ve searched near lakes, rivers, fields, forests, abandoned buildings, the swamp near her home in Easton, anywhere where someone might dump a body,” Gould said.

The Maine State Police still classifies Pictou-Noyes as a missing person. Police state on that website, “We are reasonably sure she got a ride to the truck stop in Houlton as witnesses saw her using the telephone. She was last seen walking north through the parking lot of the truck stop.”

Family members and supporters continue to share her story. A Facebook group, “The Search for Virginia Sue Pictou-Noyes,” now boasts 909 members, and the case is featured on websites devoted to missing persons, including the Charley Project, Porchlight International and the Doe Network.

The Pictou family members also have told her story to raise awareness about domestic violence and its effect on families.

On Nov. 2, 2017, several members of the family appeared on the Canadian-based Cable Public Affairs Channel as part of a national inquiry into missing and murdered indigenous women and girls at the Membertou First Nation in Nova Scotia, from where the Pictou family hails originally.

The family and police have considered Larry Noyes a prime suspect, but he has denied all allegations and never been charged in connection with the disappearance.

A BDN reporter interviewed Larry Noyes in 1994 at the Aroostook County Jail, where he was serving a one-year sentence for operating a motor vehicle while under the influence of intoxicating liquor, driving after license suspension, driving to endanger, failure to stop for an officer and violation of bail conditions.

“They said I hit Virginia, which I never did,” he said in the interview. “Everyone thinks I killed her. Let them think what they want; I know what is true.”

Efforts to contact Larry Noyes for this story were unsuccessful.

Lt. Troy Gardner, the head of major crimes for the state’s northern division, said on April 23 that he could not comment on specific recent leads regarding Pictou-Noyes’ disappearance because the investigation is still active. But he noted that the Maine State Police still considers Larry Noyes to be a person of interest.

“We’re willing to talk with anyone who has information regarding this case. Sometimes people don’t come forward because they think their information isn’t important, but we can only know that for sure if we’re able to look into it,” Gardner said. “We prefer that people call us with any potential lead so that we can at least investigate whether the information is accurate or credible.”

Since their appearance last year on the Cable Public Affairs Channel, Pictou family members say that a witness who they won’t publicly identify to protect that individual has come forward to say Pictou-Noyes received a ride from Houlton to Easton from a truck driver.

The family members believe they know what happened but they need that truck driver to come forward to verify the information.

With support from the Hope and Justice Project in Aroostook, they have done many media interviews in hopes that the trucker will reach out to them and the Maine State Police and help them fill in the gaps in Pictou-Noyes’ story.

“You don’t know how important you are to the indigenous community, to the domestic violence community. We encourage you to please come forward so that we could put this case to a close and begin healing,” Francis Pictou said, referring to the truck driver. “That part of the timeline, from Houlton to Easton, is the only thing we’re missing.”

On Saturday, the day after their press conference in Presque Isle, the Pictou family held a commemoration of Pictou-Noyes’ life at Spruce Haven in Caribou that included a talking circle in which her siblings, father, cousins and friends shared memories about her life with her children and grandchildren.

“We all have fond memories of Virginia. Her children and grandchildren don’t have those memories,” Gould said. “We want to humanize Virginia’s story and tell other families who have a member who has been missing to never give up.”

Anyone with information regarding Pictou-Noyes’ disappearance is urged to contact the Maine State Police in Houlton at (207) 532-5400.

Just when we thought we were out of the woods with kitten season, it has hit full force.  The past few days have been difficult answering the phone and hearing the stories of why people have litters of kittens they need to surrender.
Campaign Corner END_OF_DOCUMENT_TOKEN_TO_BE_REPLACED