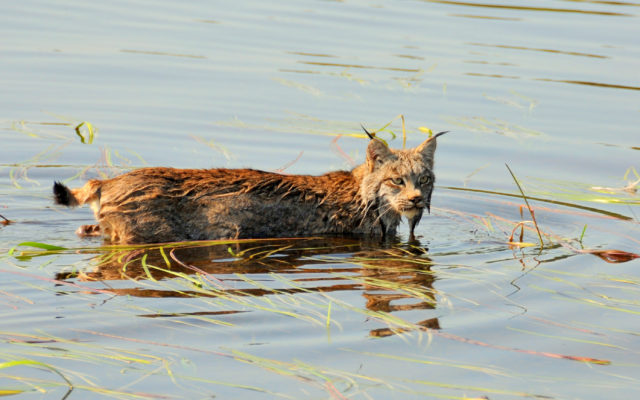 Matthew LaRoche, Special to The County • May 11, 2018
Northern Maine’s resident wildcat, the Canadian Lynx, is doing quite well along the shores of the Allagash Wilderness Waterway.

Northern Maine’s resident wildcat, the Canadian Lynx, is doing quite well along the shores of the Allagash Wilderness Waterway. So well, in fact, that the U.S. Fish and Wildlife Service, which currently lists the lynx as threatened, has started the process of delisting the lynx from the endangered species list.

While the delisting recommendation does not remove or negate the Endangered Species Act protections currently in place for the Canada lynx, the decision does trigger a process to end them. The first step would be for U.S. Fish and Wildlife to publish a proposed rule in the Federal Register, then take public comments and finally draft a final decision.

In the lower 48 states, only Maine, Minnesota, Montana, Colorado, Idaho and Washington support resident breeding populations of lynx. Recently, lynx have been observed in New Hampshire and Vermont (including lynx with kittens), suggesting lynx are expanding into former parts of their historic range.

Maine has the largest population of lynx in the lower 48 states, and the population is growing. Chandler Woodcock, commissioner of the Maine Department of Inland Fisheries and Wildlife, said in a statement provided by the Denver office of U.S. Fish and Wildlife, “Not only are lynx found in more places, but signs of lynx are found more frequently during our surveys.” Current estimates suggest between 750 and 1,000 adult lynx occupy the spruce/fir forests of northern and western Maine. Maine IF&W designates the Canada Lynx as a species of special concern.

The elusive wildcats are similar in size and appearance to bobcats. Lynx appear larger because of their long legs. The most distinguishing lynx characteristic, their unusually large feet, help them travel over deep snow, much like a cat on snowshoes. Lynx also have long ear tufts and a completely black-tipped tail, where bobcats have short ear tufts and the tip of their tail is black on top and white underneath. Adult male lynx weigh between 26-30 pounds and females between 17-20 pounds.

Male lynx are solitary for most of the year, except the breeding season. In March, they increase their movements in search of mates. Females give birth to litters of one to five kittens in dens usually consisting of a depression in a spruce/fir thicket, under a blowdown. Kittens are raised by the female, who occasionally leaves the den to hunt. Kittens are able to travel with their mother by early July, and stay with her until the following spring.

The size of a lynx’s home range can vary with snowshoe hare density, habitat, conditions and season. In Maine, male home ranges are twice as large as a female’s home range, about half a township (18 square miles). Female lynx share their entire range with the male, and the male may share portions of his range with one to three adult females.

This forest-dwelling cat is a highly specialized hunter. Snowshoe hare comprise over 75 percent of their diet. Lynx consume one or two hares a day. In summer, the diet is more varied and may include grouse, small mammals and squirrels.

A lynx sighting can be the highlight of an Allagash canoe trip. These sightings are not uncommon in the Umsaskis and Long Lake section of the waterway. Steve Day, waterway ranger stationed at Umsaskis, regularly sends me pictures of lynx he sees while working in that area. A couple of years ago, Steve got some great footage of a lynx swimming across the north end of Long Lake and on another occasion, one of the big cats walking across the bridge on the Realty Road.

I have spotted most of the lynx I have seen while traveling the many miles of gravel roads adjacent to the waterway. Most of my sightings have been just a fleeting glimpse of a long-legged animal jumping out of the road, but last winter, one just stood on the side of the road and let me have a good look at him. He was a fine-looking specimen, well furred, with tall ear tufts and huge feet. He was a beauty.

Matthew LaRoche is superintendent of the Allagash Wilderness Waterway. The waterway is managed by the Department of Agriculture, Conservation and Forestry’s Bureau of Parks and Lands.  For information go to: www.maine.gov/allagash or call (207) 941-4014 for an information packet.

For the first time since 2019, there is competition for open seats on the Houlton Town Council
Pets END_OF_DOCUMENT_TOKEN_TO_BE_REPLACED

We hope everyone enjoyed a wonderful holiday season and is looking forward to the new year.  December was a busy month at the Central Aroostook Humane Society with so many people and businesses bringing in much-needed supplies and monetary donations, which help us to take care of the special temporary pets in our care.
What's Happening This Week END_OF_DOCUMENT_TOKEN_TO_BE_REPLACED