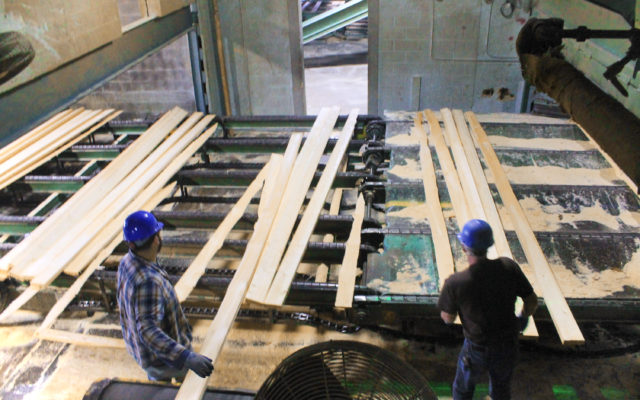 Maibec mill on track for expansion with new equipment

Anthony Brino • May 23, 2018
The Maibec lumber mill is expecting to increase its capacity thanks to new equipment being supported with loan backing from the Finance Authority of Maine.

MASARDIS, Maine — The Maibec lumber mill is expecting to increase its capacity thanks to new equipment being supported with loan backing from the Finance Authority of Maine.

The FAME board on May 17 approved a 90 percent loan insurance backing for a $944,000 loan made by TD Bank to Maibec in Masardis, which is a part of the Quebec-based Maibec company.

The loan will be used to purchase a new feed conveyor deck and a debarker machine. That new efficient equipment will then allow the mill to build a new drying kiln that will help expand production by up to 25 percent, said mill manager Nate Whitney.

Whitney said the new conveyor system will replace equipment that dates back to the original mill designs in the 1970s.

“They’re older and they’re prone to down time. Those will be replaced with a new conveyor,” he said.

The mill also is acquiring a new, high-speed log debarker that will replace the oldest of the mill’s three debarking machines, which date back to the 1980s, Whitney said.

The two equipment replacements will be completed by early fall or the end of the year, Whitney said.

“One of the key things about this is it will enable us to build a new drying kiln, which will increase our capacity by about 25 percent,” Whitney said. That new kiln is slated to be in place later this year or early next year.

FAME is a state business finance agency created in 1983 designed to support Maine business ventures. The loan backing is a part of the agency’s commercial loan insurance program that insures a portion of business loans from traditional lending institutions.

“FAME is pleased to support Maibec’s plans for efficiencies and continued operations in Aroostook County,” said FAME CEO Bruce Wagner in a media release. “We are happy to help facilitate this transaction to help the company better optimize the lumber mill for long-term success.”

Owned by the Tardif family of Quebec City, the Maibec mill has long had ties to the North Maine Woods as a supplier of timber for the St. Pamphile, Quebec mill, located 35 miles west of Allagash. The name Maibec is a blend of the words Maine and Quebec.

The Masardis mill originally was built in the 1960s as the Levesque mill and now is the largest in output in Aroostook County, with 145 employees producing dimensional fir and spruce lumber for East Coast wholesale markets.

“Business is very strong,” Whitey said. “The lumber market is probably the strongest it’s been since the downturn in 2006. 2×4’s in particular are at an all time high.”

“This financing should result in additional work at the mill with a better value-added yield for our operations,” Vachon said in the media release.