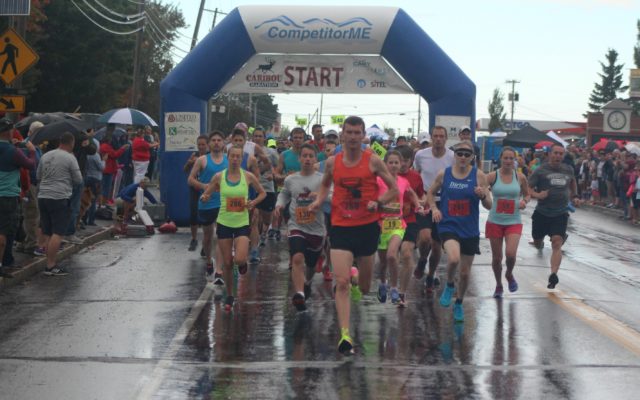 Kevin Sjoberg • September 18, 2018
Wolfgang Hoeksma didn’t realize he was the oldest competitor in the Caribou Marathon until soon after finishing his race, but a smile quickly appeared after being told of the distinction.

CARIBOU, Maine — Wolfgang Hoeksma didn’t realize he was the oldest competitor in the Caribou Marathon until soon after finishing his race, but a smile quickly appeared after being told of the distinction.

The 71-year-old Miramichi, New Brunswick, resident completed the half marathon just 11.7 seconds ahead of his goal of 2 hours. He was one of 308 runners and walkers participating in Sunday’s event.

Hoeksma said he has competed in 40 marathons, including 30 Boston Marathons, four ironman triathlons and several other races of various distances during his 40-year running career.

Hoeksma and the other participants braved warm temperatures for the second year in a row. He said the course is challenging, but the number of hills along the route suits him just fine.

“It has a lot of ups and downs, but you don’t get as tired like you would if it was all flat and it’s a good change for your muscles,” said Hoeksma, whose son, Jeffrey, was a participant in the full marathon.

Norm Trask of Easton douses himself with water as relief from the warm temperatures that greeted runners in Sunday’s Caribou Marathon. (Kevin Sjoberg)

The elder Hoeksma is a fan of the race and how well organized it is, especially the water stops, which are especially vital with the heat as much of a factor as it was Sunday.

“Sometimes in Boston you can spend two or three minutes waiting for water, but here there are lots of volunteers taking care of that and today was a day you needed that because it got pretty hot,” he said.

One of those volunteers was Tammy Deveau of Caribou, who was working the water/energy drink stop at the 12-mile mark. She said she was glad to be involved in assisting the competitors.

“These runners are an inspiration,” said Deveau, who added she always gets a ‘thank you’ from them. “It’s good to see people being healthy and the community cheering them on.”

Pat Sterris of Caribou attended the race with her 9-year-old granddaughter, Raquell Sterris of Fort Kent, to offer encouragement to those passing by. Raquell even helped by collecting empty cups left behind by the runners.

“The dedication these runners show is impressive,” said Pat Sterris. “Events like this are important to the community and I enjoy coming out to show my support.”

Terri Ouellette and her husband, Pete, reside on the East Presque Isle Road and both were excited about this year’s change in the route after a portion of the River Road was closed down because of damage caused by heavy rain and flooding in the spring.

She and approximately 20 family members and friends stood along the road by their home along the new route and created excitement for the passers-by with a combination of cowbells, music, dancing and cheering.

“We thought it’d be a good opportunity to get together to support these athletes and hopefully inspire people,” said Terri Ouellette, whose co-worker, Thomas Wire, competed in the full-length marathon.

Hoeksma was one who appreciated the support of fans along the way.

“There are a lot of nice fans along the course,” he said. “I even had 3-year-olds giving me high fives. It’s so nice to have people cheering you on along the way.”

Kane-Gibson added that between 150 and 200 volunteers, representing several schools, businesses and organizations from the city, lent their support to the event. 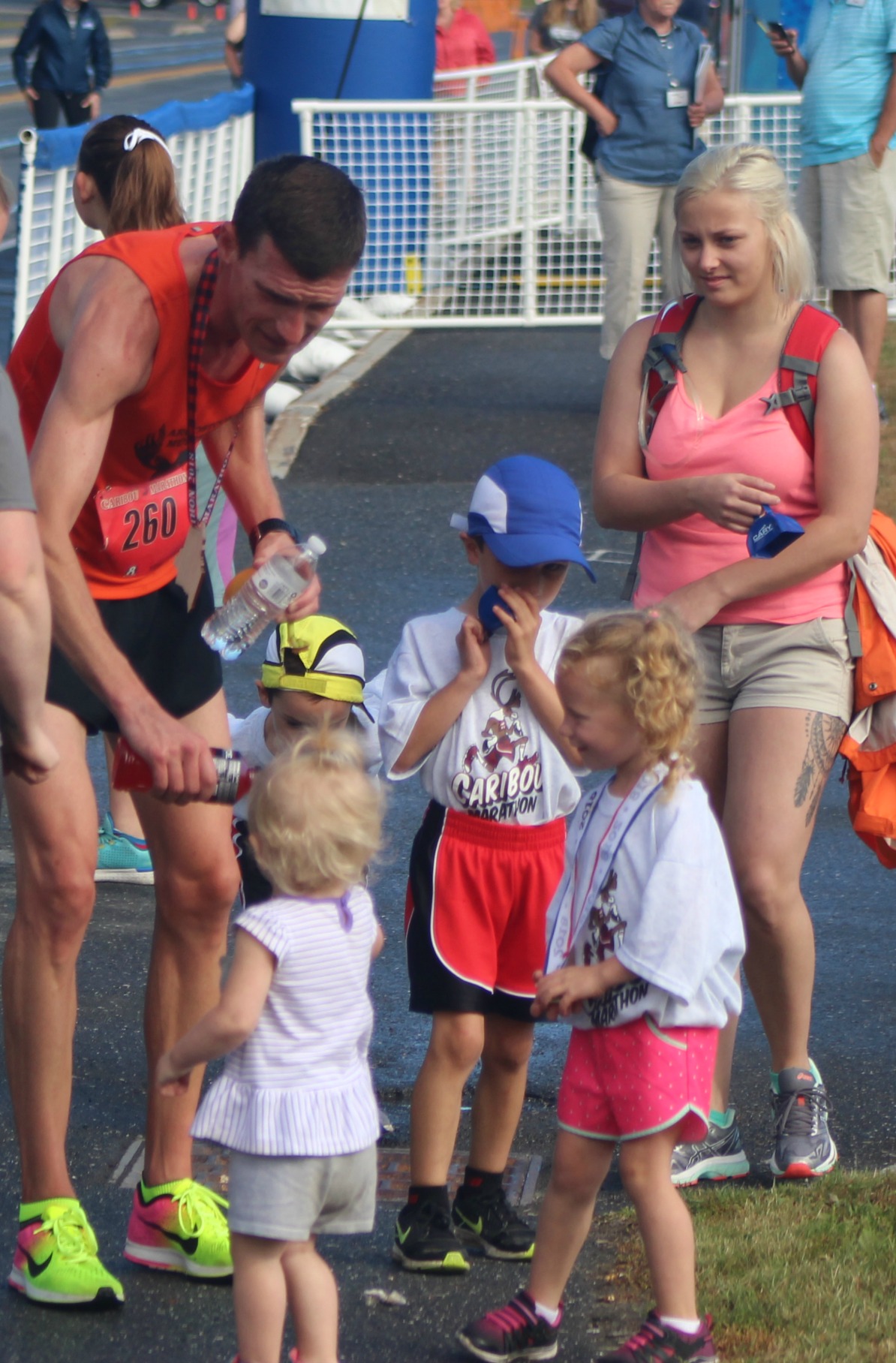 P.J. Gorneault of Caribou receives greetings from young fans after winning the half marathon Sunday in Caribou. (Kevin Sjoberg)

The really young runners had their own day with the Caribou Kids Race, a 1.2-mile race on Saturday which was followed by a free spaghetti supper at the community center. Ninety six youths, between the ages of 3 and 13, participated.

For complete results from all the weekend races, visit online: https://runsignup.com/Race/Results/26395/#resultSetId-129393 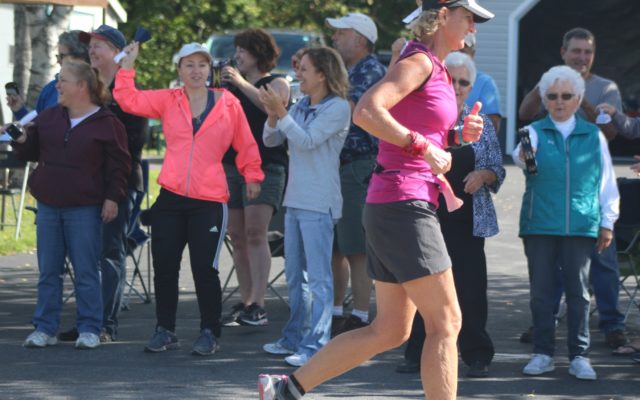 Fans in front of a residence on the East Presque Isle Road belonging to Pete and Terri Ouellette loudly cheered on runners as they passed by during Sunday’s Caribou Marathon. (Kevin Sjoberg) 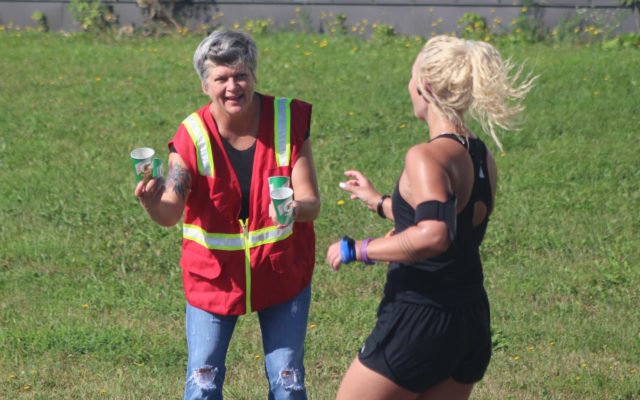 Volunteer Tammy Deveau offers a drink cup to competitor Emily Wright of Bangor during a water stop in the Caribou Marathon on Sunday. (Kevin Sjoberg) 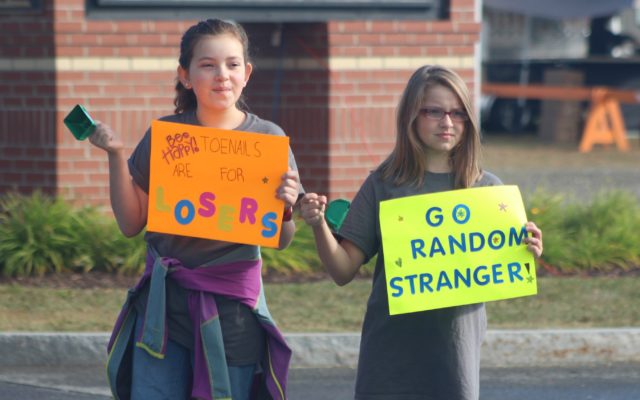 Eleven-year-olds Isabella Cherrier, left, and Desirae Ouellette, both of Caribou, support incoming runners with cowbells and signs at the finish line of the Caribou Marathon. (Kevin Sjobeg) 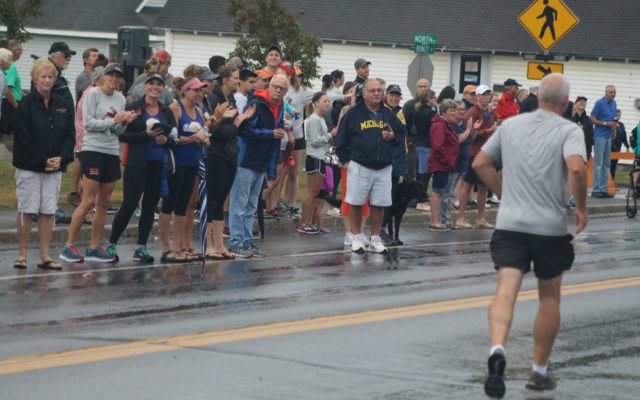 Halfway Home Pet Rescue in Caribou has partnered with the Houlton Humane Society shelter for a cat spay and neuter clinic on Saturday, May 30, and Sunday, May 31, in Houlton.
Campaign Corner END_OF_DOCUMENT_TOKEN_TO_BE_REPLACED