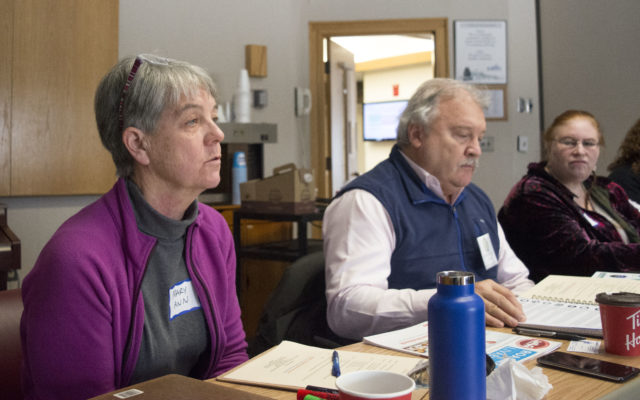 Chris Bouchard • November 23, 2018
Maine Department of Transportation officials met with representatives from a variety of County agencies on Monday to discuss issues with the northern Maine public transit system and determine which aspects of the program should be prioritized moving forward.

CARIBOU, Maine — Maine Department of Transportation officials met with representatives from a variety of County agencies on Monday to discuss issues with the northern Maine public transit system and determine which aspects of the program should be prioritized moving forward.

McCartney explained that he and Flagg have begun collaborating a great deal since both Caribou and Limestone were deemed “Age Friendly Communities” by AARP, a distinction that indicates a municipality is dedicated to the well-being of its senior residents.

“What Bill and I have been collaborating on recently is the part of the program that determines the community’s needs,” McCartney said. A recent poll asking Limestone about the town’s greatest needs indicated “the number one thing is better transportation, whether it’s for seniors or for people who need a ride to work because they don’t have a car.”

Limestone has no public transportation, which he said is having a negative impact on property sales in town.

“A lot of real estate is available,” he said, “but there’s no way to fill it because people don’t have a way to get to their jobs.”

McCartney said that while he would like to see DOT become aware of what Limestone faces, his primary goal is to see the entire county better served in terms of public transit, particularly the areas north of Caribou and Limestone.

They spent the bulk of the meeting examining five proposed categories and several strategies within those categories for improving statewide transit. After lengthy discussion, participants used a remote device to rank the categories and strategies in terms of the highest priority for the MDOT.

Among strategies discussed under Rider Information, were online trip planners, mobility navigators available to answer questions via phone call, the implementation of travel training programs that teach rural residents how to ride the bus, and general publicity of transit services. Those in attendance voted that publicity should be treated as the top priority in this section.

Among all the categories, they ranked partnerships as the most important.

In terms of local needs, one participant stated that the current Aroostook County Transportation System schedule can make it difficult for many rural residents in northern Maine to make appointments.

Joy Barresi Saucier, executive director of the Aroostook Agency on Aging, asked how the ARTS schedule impacts access to food. Ken Murchison, director of the Caribou Bread of Life Soup Kitchen, said that with kitchen typically open from 4-6 p.m., many who use ARTS for transportation have “already been downtown and had their ride home” before the kitchen opens.

“We try to schedule one day a week to be open at noon,” he said, “which worked for a minute when we advertised hard and put the word out there.” But then the traffic quickly declined after they cut the advertising.

He added that he has “nothing but praise” for the ARTS program and has witnessed drivers help passengers get into their walkers or wheelchairs and made sure they were able to access their homes after being dropped off.

“They’re doing their job for sure,” Murchison said.

“The Methodist Church in Limestone offers a free meal once a month,” said McCartney, “and there’s maybe a dozen people there. The room should be packed, but a lot of people don’t have a way to get there.”

Looking to the future, McCartney said he envisions a local program which would help Limestone residents travel to either the church, Caribou, or Presque Isle so they could have access to food.

Barresi Saucier recalled attending a senior club in Easton where the members were bemoaning the small attendance and started talking about coordinating within their own network to get more people to the events.

McCartney agreed that communication and “getting the word out” is crucial, and that “now, it’s a matter of taking care of the logistics.”

Flagg suggested state-funded incentives for communities that go out of their way to purchase a van dedicated to transporting residents, possibly by “matching investments made by that local community.”

MDOT officials paid close attention and wrote down many of the concerns and suggestions raised at the meeting before adjournment. They also are seeking community feedback via a long-range transportation survey that can be taken online at mainedot.com/longrangeplan.