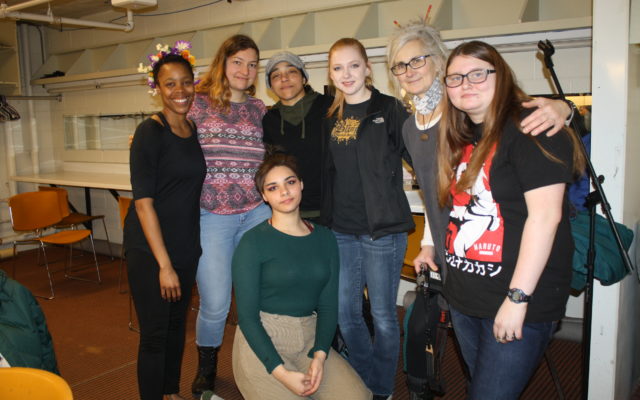 Melissa Lizotte • February 17, 2019
Carol Ayoob hopes to bring that message of empowerment back as part of a new theater program for today’s young girls.

PRESQUE ISLE, Maine — Twenty years ago, Carol Ayoob established a theater group for girls in Aroostook County called “sisters-IN-sight” that aimed to empower and inspire them. Now, as executive director for the nonprofit organization Mainely Girls, Ayoob hopes to bring that message of empowerment back as part of a new theater program for today’s young girls.

Since late January a group of five girls ranging in age from 15 to 34 have met every Saturday afternoon at the University of Maine at Presque Isle’s Wieden Auditorium to learn about theater performance techniques and share personal stories that might later become inspiration for skits, dances or other forms of performance art. The common thread has been talking about and confronting issues facing young girls such as sexism, bullying, peer pressure, racism and how to gain self-confidence in difficult situations.

During her six years with sisters-IN-sight, Ayoob worked with 33 girls from eight Aroostook County schools and took their act on tour down to Maine coastal towns for performances in public schools, which she supported through grant funding. Many of the girls in the theater group, she said, had never been to the Maine coast before then.

Recently, Mainely Girls received a grant from the Maine Community Foundation that will support the Mainely Girls Theater Co. throughout the spring semester. Ayoob and the nonprofit’s board of directors hope to take the current group of girls on tour this spring and to continue supporting the program this fall through grants and fundraising, as they do with other Mainely Girls initiatives such as book clubs, a college mentorship program and an annual spring conference at the university in Presque Isle.

“We want to create a dialogue where they can share what it’s like to be a girl in a rural county,” said Ayoob, who is also an artist and an adjunct instructor for Presque Isle university’s art program. “Right now we’re working on ways that they can use their voices and bodies to tell stories, become different characters and gain self-confidence.”

Part of the girls’ journey also involves learning from one another and hearing the stories of other female performers. During their most recent meeting, the Mainely Girls theater members visited with Rene Goddess Johnson, a Portland, Maine-based performance artist. Johnson performed her one-woman show “Geel,” which incorporates multiple characters, song and dance to tell the story of her coming to Portland from Johannesburg, South Africa, enduring childhood abuse and teenage self-harm and coming to terms with racism in Maine.

Although Mainely Girls Theater has only just begun meeting, many group members already feel a shared sense of connectedness and have noted the positive relationships they’ve formed with each other.

“I absolutely love theater and the arts. It’s been incredibly empowering to be around other girls and to express ourselves in this way,” said Abby Shannon, 15, of Washburn.

Shelle Arthur, 18, a University of Maine at Presque Isle student from St. Agatha, said that she appreciates the sense of family that exists among the group members.

“It’s important that we have the chance to interact with people we might not otherwise meet,” said Arthur, who is also part of the Mainely Girls college mentorship program.

Moving forward, Mainely Girls Theater hopes to recruit more members and to build upon the unique opportunities that the performing arts can provide.

“Our goals are to build connections between these girls, boost their self-confidence and help them feel positive about themselves as young women,” said Meghan Everitt, a Mainely Girls board member and student at the University of Maine at Presque Isle.

Recently we took in a cat named Joe. He is a very sweet cat with a multitude of problems. He was rescued from the streets here in town, but Joe turned out to be a very sick kitty and was surrendered to The Ark because the resources were not there to help him.
What's Happening This Week END_OF_DOCUMENT_TOKEN_TO_BE_REPLACED