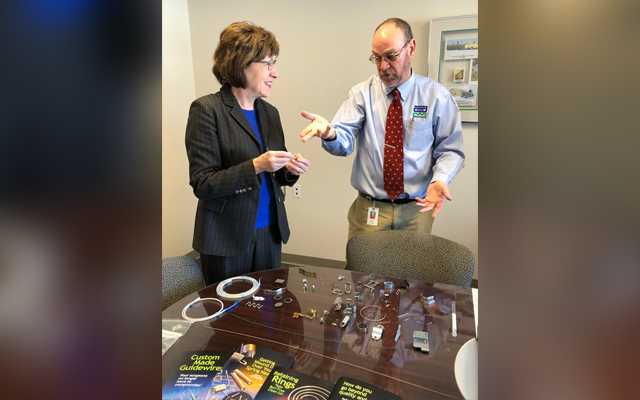 Anthony Brino • February 19, 2019
U.S. Sen. Susan Collins visited the Acme Monaco plant Tuesday to learn about one of Presque Isle’s manufacturing companies and some of the challenges for businesses and workers.

PRESQUE ISLE, Maine — U.S. Sen. Susan Collins visited the Acme Monaco plant Tuesday to learn about one of Presque Isle’s manufacturing companies and some of the challenges for businesses and workers.

“This company disproves the myth that there aren’t good jobs available in Aroostook County,” Collins said after touring the facility. “Those who think they have to leave Aroostook County to get a good job, I would say that’s not the case.”

In 2017, Acme Monaco moved from two locations at the Skyway Industrial Park into a new 16,300-square-foot space on Central Drive that employs about 75 people manufacturing orthodontic wires, medical catheter guidewires and other industrial parts.

Headquartered in Connecticut, the family-run company has been operating in Presque Isle for more than 30 years, and in recent years has invested in the new facility and equipment while leveraging approximately $3 million in federal economic development grants.

Collins said she visited Acme Monaco because she “wanted to learn what they saw as their biggest challenge of doing business in Maine and in Aroostook County.”

“Their number one concern was the lack of workers,” Collins said. “They are looking for additional people to hire, and I’m finding that a lack of workers is a major problem for Aroostook and throughout the state.”

In an interview in 2017, Acme Monaco co-president Rebecca Karabin-Ahern said the company has found a skilled workforce in Aroostook County but nonetheless has struggled to recruit enough employees. “There are a lot of other industries up here that we’re competing with,” she said at the time.

Collins said she also asked employees at Acme Monaco about issues on their minds, and they “brought up the high cost of energy in Aroostook and also the lack of broadband.”

She said she’s hoping that rural Maine will be able to access some of the $600 million in broadband funding that was included in the 2018 farm bill.

“That’s something we’ll be pursuing.”

Collins also said she would be looking for opportunities over the next two years for infrastructure funding. She chairs the appropriations subcommittee on transportation, and pointed to infrastructure funding Maine has received in recent years, such as funding for the Northern Maine Railway.

“I am a strong supporter of having an infrastructure bill. If you drive around Maine as much as I do, you see crumbling roads with huge potholes. You see deteriorating bridges that have to be posted. You see the need for rural broadband,” Collins said.

“My hope is the administration will put forth a bill that will garner bipartisan support to really invest in the infrastructure in our country. Every single state has a backlog of needed projects, and Maine is no exception.”

Next year's Caribou City Council will include a new member and a longtime councilor thanks to Tuesday's election.
Pets END_OF_DOCUMENT_TOKEN_TO_BE_REPLACED

Everyone who enjoys the company of a dog knows that sometimes dogs have strange behaviors.  They may arrive in your life with the behaviors already in place, or perhaps they are adopted as a puppy and develop a behavior young.
What's Happening This Week END_OF_DOCUMENT_TOKEN_TO_BE_REPLACED