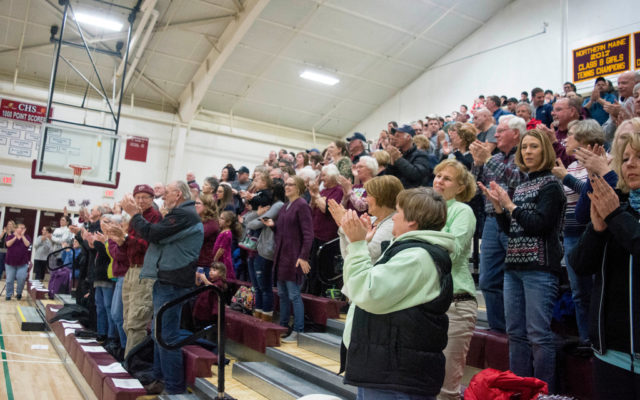 Chris Bouchard • March 1, 2019
High winds and drifting snow on roadways did nothing to stop hundreds of fans from coming out to the Caribou High School gym to show their support for the Caribou boys basketball team on Feb. 27.

CARIBOU, Maine — High winds and drifting snow on roadways did nothing to stop hundreds of fans from coming out to the Caribou High School gym to show their support for the Caribou boys basketball team on Feb. 27.

The community’s contagious excitement has been growing since Saturday, Feb. 23, when the Caribou team defeated Hermon at the Cross Insurance Center 43-40 and claimed the Class B North regional title. Now, the Vikings have a chance to claim the state title for the first time since Mike Thurston won Caribou the gold ball trophy by making a last second shot from beyond half court 50 years ago.

The Caribou Vikings are set to play against Cape Elizabeth on Saturday, March 2, at the Cross Insurance Arena in Portland at 2:45 p.m., and not a single person in attendance during Wednesday’s reception seemed to doubt that they would be bringing home a second gold ball for the city.

The crowd roared as Athletic Administrator and Assistant Principal David Wakana introduced the “2019 Northern Maine Champions” one by one and they took seats on the gym floor facing the packed bleachers.

RSU 39 Superintendent Tim Doak shared a story about how he was able to play in a state final while attending high school in Fort Fairfield in 1984. 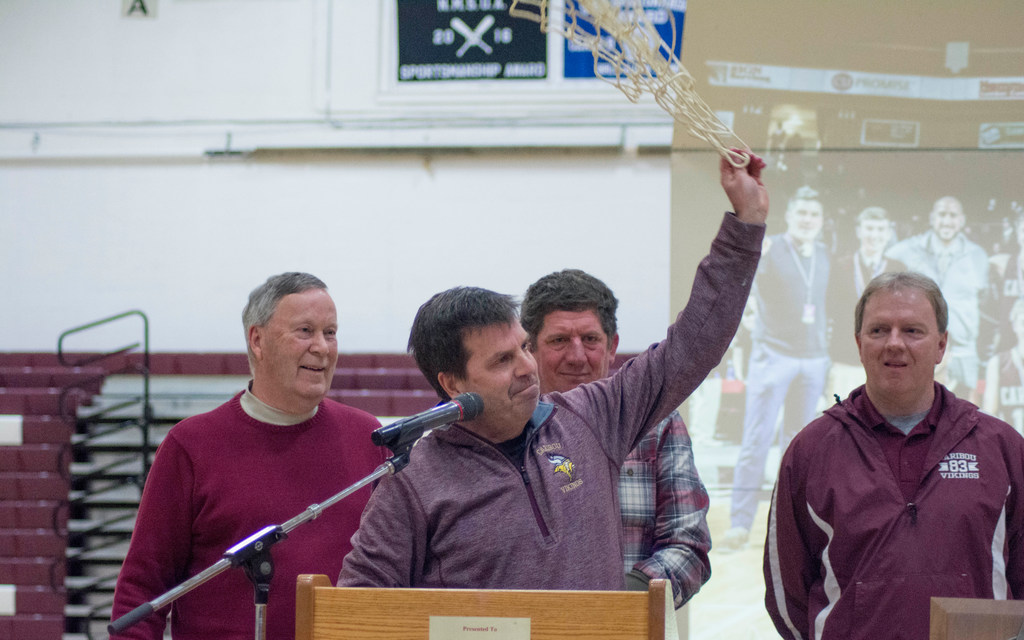 Scott Hunter, who played on the last CHS team to win a regional championship in 1983, swings the net just like he did after winning then, and just like boys basketball player Austin Findlen did after the Vikings won the 2019 Class B North regional championship on Feb. 23. Behind him, from left, are Jeff Jose, who was assistant coach on that team, Karl Espling, and Marc Weeks. (Chris Bouchard)

“We didn’t win,” he said, “but one thing I want to impress on everyone in the gym is that, growing up in Fort Fairfield, basketball was our life, but we all wanted to be like Caribou.”
This elicited big applause from the crowd, and Doak continued to describe why other teams wanted to be like the Vikings.

“We felt that Caribou had such a high level of sportsmanship,” he said. “They always set the bar during my time while I was in school.”

“He cared most about the kids and about excellence,” Doak said of Hunter, who was in attendance, “and in Fort Fairfield we emulated that as much as we could in our basketball teams. You need to be very proud of our community. This is the start of getting back into being at the top of what we do in our school programs.”

The lights dimmed after Doak’s introduction and a video message from U.S. Sen. Susan Collins, a CHS graduate herself, provided encouraging words for the upcoming game.

Members of the first Caribou team to win a regional championship in the late 1950s next approached the podium, with Bob Cyr speaking to the crowd.

“We were underdogs back then,” he said, “and we beat Bangor, which was unusual, then we beat Brewer, and that’s how we won the Eastern Maine tournament. It was a great feeling, and let me tell you it’s a feeling you’ll have for the rest of your life.” 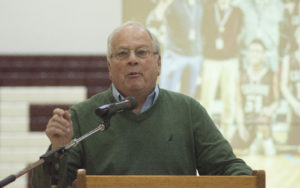 Dwight Hunter, former Caribou High School athletic director who presided over both the 1983 regional champions and 1969 Caribou boys basketball state champions, spoke during a Feb. 27 reception for the 2019 Caribou boys basketball team, who recently won the regional championship and are set to play the state championship game on March 2, calling the team a “class act headed up by a very classy coach.”
(Chris Bouchard)

The event also featured uplifting words of encouragement from Scott Hunter of the last regional championship team of 1983, who was joined by teammates Karl Espling and Marc Weeks and assistant coach Jeff Jose, as well as Sam Collins of the 1975 team and his teammates Duane McCubrey and Kevin Giles.

Austin Findlen, Parker Deprey, and Alex Bouchard of the 2019 team as well as their coach Kyle Corrigan also spoke to the crowd.

Even Dwight Hunter, who served as CHS athletic director during both the 1969 state victory as well as the 1983 regional victory, made an appearance and spoke about Caribou’s success throughout the years, commending the 2019 team for being a “class act headed up by a very classy coach.”

Bob Stedt and Larry Murphy of the 1969 team that won the state championship 50 years ago were joined by teammates Peter Curran and Jeff Jose as they encouraged the current team and the Caribou community.

“I can’t tell you how to play on Saturday,” said Bob Stedt, “but if you play with a lot of heart and have fun, you’ll win. Good luck Saturday.”

Murphy shared an anecdote about Quentin Blackstone, a member of that state championship team who died in 2007.

“He was a farm boy who lived off the Woodland Center Road,” said Murphy. “He was about 6-foot, 3-inches and weighed about 225 as we’ve tried to guess. He was not a great athlete — he couldn’t score if he was more than a foot from the hole. But he was a determined young man and during the state game he scored 28 points.

Murphy said that while the late Blackstone didn’t bring anything new in terms of skills to the table, he brought more “fuel and energy in his body than ever.”

“He brought the one thing he had control of,” Murphy said, “and it’s the one thing you all  have control of, the energy you bring with you and your will to succeed. That energy can’t only be there when things are going good.”

He made a fist and said that when a team plays together as a whole, they will always defeat five opponents playing as individuals.

“If you boys stay together like this,” he said with his fist in the air, “and bring a Quentin Blackstone amount of energy and determination, you’ll bring that gold ball back 50 years later right here where it belongs.” 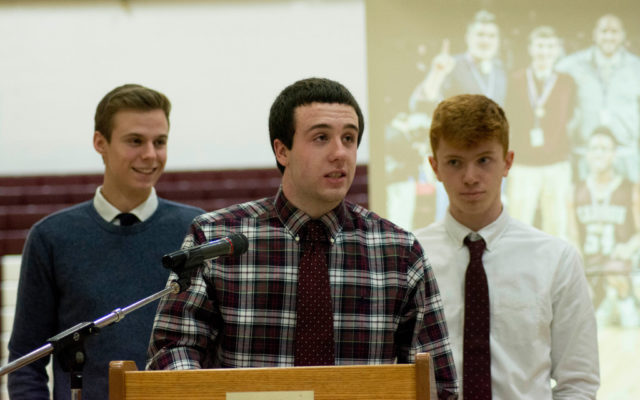 Members of the Caribou boys basketball team that won Class B North regional championship on Feb. 23 speak at a Feb. 27 reception at the high school, which was held to both celebrate that win and a rally the team for the state championship game on March 2. Team members, from left, are Parker Deprey, Austin Findlen, and Alex Bouchard. (Chris Bouchard) 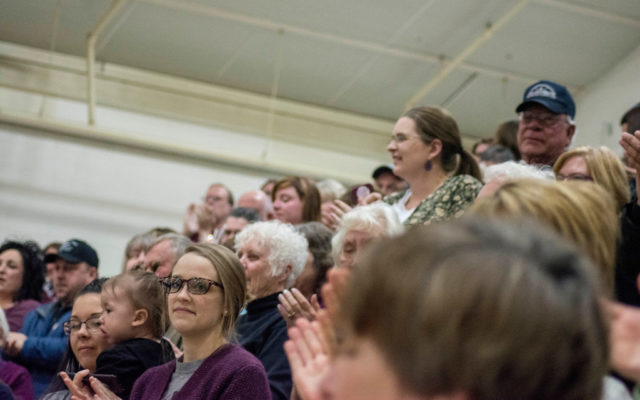 Treacherous traveling conditions didn’t stop hundreds of fans from crowding into the Caribou High School gym on Feb. 27 for a reception honoring the Caribou boys basketball team for winning the Class B North regional championship on Feb. 23 and offering encouragement for the state championship game on March 2.
(Chris Bouchard)

Maine is more than eight months into Medicaid expansion under the federal Affordable Care Act and trends around who is enrolling and where they live are starting to emerge, bucking some expectations and pointing out access challenges.
Pets END_OF_DOCUMENT_TOKEN_TO_BE_REPLACED