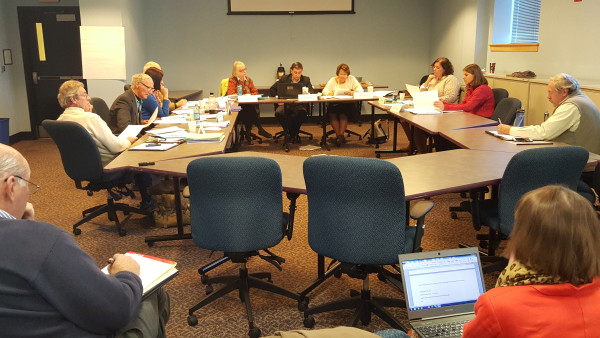 How Maine Democrats aim to clamp down on charter schools

Alex Acquisto • April 17, 2019
Lawmakers on Tuesday voted on three charter school regulation bills that, while inconsequential in the immediate future, signal building momentum among Democrats in the Legislature to tighten the standards on Maine’s charter school system.

Lawmakers on Tuesday voted on three charter school regulation bills that, while inconsequential in the immediate future, signal building momentum among Democrats in the Legislature to tighten the standards on Maine’s charter school system.

Democrats want to prevent the creation of new charter schools and raise accountability for existing ones. Education and Cultural Affairs Committee Democrats recommended that the full Legislature pass into law two bills from Rep. Michael Brennan, D-Portland. The first keeps the numeric cap of charter schools at 10 through the end of the 10-year transition period, which ends in 2022. If passed into law, the Legislature in 2020 would be expected to pass explicit standards regulating charter schools, including providing clear framework for the Maine Charter School Commission to use when considering whether low-performing schools should be closed or subject to de-authorization.

A second bill from Brennan sets the enrollment ceiling of Maine’s two virtual charter schools at 1,000 students, beginning in the 2019-2020 school year and disallows a school from expanding to serve another grade level beyond the grade levels approved in a school’s initial contract. A competing bill from Sen. Matt Pouliot, R-Augusta, would have removed the state cap of 10, mirroring an effort that began with former Gov. Paul LePage in 2013 but was resisted by Democrats. The committee voted it down unanimously.

After an early rush, there has been less interest in adding charter schools in Maine. There are currently nine charter schools operating in Maine, and since LePage began his push for the system in 2011, debate has simmered. Charter schools have been lukewarmly received by many, in part because their funding siphons away state money otherwise designated for area public schools. The state’s teachers union has long opposed them. Legislators, including Sen. Rebecca Millett, D-Cape Elizabeth, the education panel’s co-chair, have questioned the continued operation and renewal of some charters, including Cornville Regional Charter School, despite lackluster performance in some areas and ongoing challenges, like chronic absenteeism, and retention of students and teachers.

Charter schools were intended to be a “mechanism that would show remarkable performance and improvement for the students that attended,” Millett told Maine Charter School Commission executive director Bob Kautzat Tuesday’s hearing. “It, therefore, sets itself up to be held to a higher standard as a result. It’s not just another public school. These were introduced as a way to provide exceptional education opportunities. We are certainly not even getting close to being exceptional. At this point, many of us would be happy if they got to average,” Millett said.

“That reapproval process is where accountability lands,” but there is no explicit rubric defining how the commission should revoke a school’s authorization, if that’s what is deemed necessary, she said.

Kautz said the commission can and would elect to close a school now if it sees fit, and that it gauges school progress comprehensively. “We see the whole school … you see the state assessment,” he said.

But “what is the process? That’s the question,” Millett said. “My reading of the statute is there [is] none. And that’s on us.”

But Democrats might be boxed in by their past opposition to school rating systems. Millett was a leading opponent of a 2013 LePage administration proposal to enact a grading system by which parents and community members could compare the performance of Maine public school systems. Expect Republicans to point to that opposition if Democrats push for some similar form of charter school performance measurement.

Legislative committees will hold hearings on proposals including one on chemicals in food packaging, and one panel could vote on a sick leave bill. It will be another long day of hearings at the State House. Supporters will hold a morning rally before a 10 a.m. hearing on a bipartisan bill from Rep. Jessica Fay, D-Raymond, that would phase out the use of phthalates, a group of chemicals linked to reproductive issues in animals, in food packaging. Listen here.

Other hearings will be held on Democratic-sponsored proposals to allow public employees to strike, add more dental benefits for adults in the MaineCare program, increase the salary of the governor and the expense allowance paid to legislators. A raft of bills aimed at lowering prescription drug prices from Senate President Troy Jackson, D-Allagash, will also be aired. See the full committee schedule here.

Several committees could move high-profile bills to the chamber floors on Wednesday. Those proposals include a sick leave bill from Millett that has gone through a revision already and has reportedly been altered again under Gov. Janet Mills’ supervision with a goal of attracting bipartisan support. The labor panel will work on it at 1 p.m.

The elections oversight committee could vote on several bills aimed at changing the referendum process and expanding the use of ranked-choice voting, most of which are unlikely to pass. The tax committee will deal with proposals to increase revenue sharing to cities and towns, and the environment committee will work on a bill that would mandate a study of the emissions impact of Central Maine Power’s proposed transmission line before it is built.

— People who work in Maine’s traditional fishing jobs continue to squabble with oyster farmers over access to shoreline waters. The conflict moved to the State House on Tuesday, when the Marine Resources Committee held a hearing on a bill that would create a task force to study the impacts of Maine’s growing aquaculture businesses. Those impacts haven’t been studied in more than 15 years, and people who haul lobsters for a living told the committee that the proliferation of lease approvals for oyster farms and other forms of aquaculture is negatively affecting their ability to make a living.

— A woman accused of sending a threatening letter to Maine’ senior senator will be held without bail. Burlington resident Suzanne E. Muscara, 37, waived her right to a probable cause hearing and agreed to be held without bail during an appearance Tuesday in federal court in Bangor. She allegedly mailed a letter to Republican U.S. Sen. Susan Collins in October that contained a white powder that the sender claimed was anthrax. The letter came after Collins’ vote to confirm Brett Kavanaugh to the U.S. Supreme Court. Postal authorities intercepted it before it could be delivered to Collins’ home in Bangor.

— Maine’s new Department of Corrections leaders are trying to slow the turnover rate at the state’s largest prison. Last year, 55 of the approximately 180 corrections officers at the Maine State Prison left their jobs. That’s on par with past departure rates, according to warden Matthew Magnusson. The department is working internally and with McLean Hospital to address stress, mental health concerns and other causes of the chronically high turnover rate.

Long may she run

As I have made clear in the past, I only run when chased. By a carnivore or some other grave threat to my future existence.

On the plus side, I still have both of my original knees and hips. Unsullied and uncut. On the negative side, I now have a midriff that was not original equipment.

Many of my colleagues run, allegedly for fun or personal betterment. Some say that they do it for the endorphin rush. I will continue to save my endorphins for the apocalypse. Others say running helps clear their heads. I suggest that a clear head is overrated.

Some run for competition. While I could counter that playing poker offers a similar level of competition — while also allowing you to drink — I can respect that rationale.

That brings us to Joan Benoit Samuelson, who on Monday won her Boston Marathon age bracket, 40 years after she won the race as a college senior in 1979. At age 61, she finished the 26.2-mile trek in 3 hours, 4 minutes, which was only 28 minutes and 45 seconds slower than her winning time 40 years ago.

She and I are the same age. When she was a college senior winning the Boston Marathon, I was a college senior sitting in a radio station playing commercials during Red Sox broadcasts in hopes of earning enough money to pay for my diploma. I also sometimes threw a Frisbee.

It occasionally takes me 3 hours and 4 minutes to get up off the couch now, so our shared passage of time helps me gain a deeper appreciation of her accomplishments — both then and now. I’ll raise a glass in her honor — if I don’t pull a muscle in the process. Here is your soundtrack. — Robert Long

At the Houlton Humane Society, we take adopting the cats and dogs in our charge very seriously.
Campaign Corner END_OF_DOCUMENT_TOKEN_TO_BE_REPLACED