Jessica Potila • April 23, 2019
The Maine Department of Transportation blocked public access to the Fish River Bridge in Fort Kent Tuesday morning in response to rising water that reached the bottom of the structure and is expected to continue rising throughout the day.

FORT KENT, Maine — The Maine Department of Transportation blocked public access to the Fish River Bridge in Fort Kent Tuesday morning in response to rising water that reached the bottom of the structure and is expected to continue rising throughout the day.

The bridge connects East and West Main streets at the heart of downtown Fort Kent. DOT officials decided to close the bridge as a precaution at about 5:30 a.m., according to Fort Kent Emergency Management Director Ed Endee, who is also the town’s fire chief. 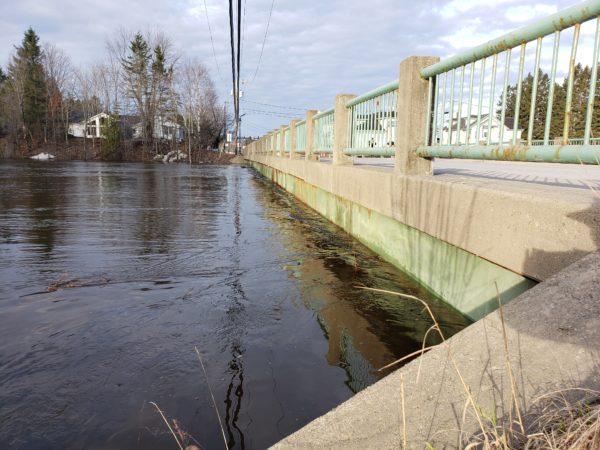 On Tuesday morning, floodwater in Fort Kent brushes the underside of the Fish River Bridge, forcing the town to close the Main Street bridge to traffic. (Andrew Birden | SJVT/FhF)

“The state owns the bridge and they understand the engineering of it,” Endee said.

A gauge installed at the Fish River by the U.S. Geological Survey indicated the river was at 10.95 feet “and it’s anticipated to go to 11.2 feet, about 4 inches higher,” he said. “That should happen by around 8 a.m. [Wednesday] morning so it’s a very slow climb to that point.”

At 11 feet, which is considered flood stage, minor flooding does threaten camps and homes south of Fort Kent on the Fish River chain of lakes.

Some flooding also occurs in low-lying areas of Fort Kent, but Endee said Tuesday morning that officials do not expect the Fish River will reach the roadway on the bridge.

“We don’t anticipate it will go over the bridge,” he said. “Once the river reaches the very bottom of the bridge, the water still has a long way from going overtop.”

Another town bridge connecting Pleasant Street to Market Street which also crosses the Fish River will not close, according to Endee.

“Oh no, that won’t happen; that bridge is considerably above the river and was designed that way when it was replaced,” Endee said. “We won’t have any issues with that bridge.”

Endee asks that spectators avoid the area of the Fish River Bridge and to reduce unnecessary travel across the only other bridge connecting one side of town to the other. 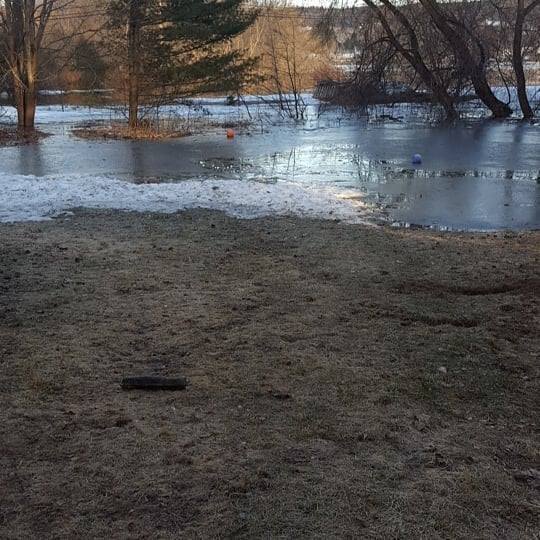 Overflow from the St. John River has taken over the backyard of the Schenk family home on West Main Street in Fort Kent on Tuesday, April 23. (Courtesy of Alicia Schenk)

“People have to go to work but if you don’t have to go over the bridge it will help reduce traffic build up so if emergency vehicles have to get through they’ll have a clearer path,” Endee said.

As of Tuesday morning, the water remained off the roadway, according to Wallagrass town manager Lana Voisine.

“It hasn’t reached the road yet, but it’s very close to it,” Voisine said.

Unless there are significant changes in the water levels, she expects the bridge to remain open this year.

“They won’t close it unless it goes over the road,” Voisine said. “I spoke with Darren Woods of Aroostook County Emergency Management this morning and he said the river should crest by 9 a.m. tomorrow, so it should be OK.”

Still, as with officials further north in Fort Kent, Voisine continues to monitor the river for changes.

“I go check it a couple times a day; I’m keeping a close eye on it,” she said.

The National Weather Service also extended its flood warning into Wednesday for the St. John River at Fort Kent, where the waterway was at 23.3 feet at 11:45 a.m. Tuesday. Meteorologists forecast that the river would crest slightly higher Tuesday afternoon, but then fall below minor flood stage of 22.5 feet by early Wednesday morning. At 22.7 feet, the St. John floods the SW Collins lumber yard and Blockhouse Park in town.

including the home of Alicia Schenk and her family.

“Today, we are about 20 feet from the river; usually it’s maybe an eighth of a mile from my door to the shore,” Schenk said Tuesday morning. 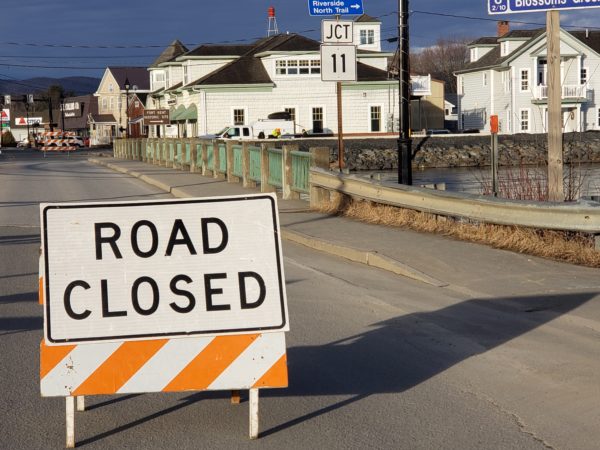 The flooding Fish River flows beneath the bridge on Main Street in Fort Kent. With the water pushing against the underside of the structure, the town has closed the bridge to traffic. (Andrew Birden | SJVT/FhF)

Schenk said she has become accustomed to water from the St. John flooding the yard of her home, which she purchased last April after renting it since 2015.

“It’s worse than last year. The high water causes the sewer or gray water to come up through a drain in the basement … it’s gross.

We had a pump set up but it didn’t go on in time. The furnace is most likely kaput,” she said.

Despite the annual flood watch, Schenk said she is happy to be a new homeowner.

“I love it. We have a great space and a decent lot,” she said. “This part is not fun, but it’s manageable. We get a little better at it each year.”

At the Houlton Humane Society, we take adopting the cats and dogs in our charge very seriously.
Campaign Corner END_OF_DOCUMENT_TOKEN_TO_BE_REPLACED