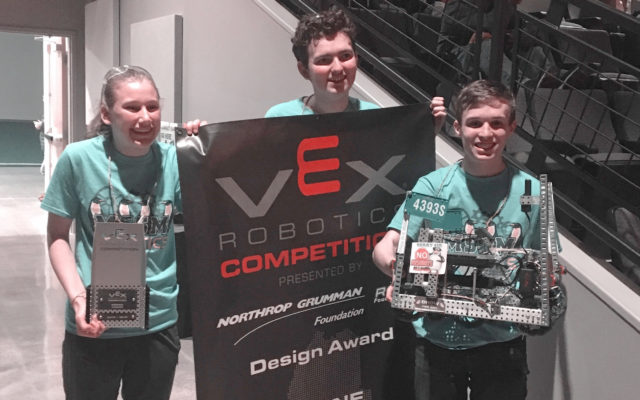 Contributed • May 19, 2019
Nine students from the Maine School of Science and Mathematics attended the 2019 VEX Worlds Robotics competition in Louisville, Kentucky, April 23-28.

The 4393Z team, comprised of Ethan Kelley, James Lau, Ryan Oh, Alex Nikanov, Federico Galbiati and Harrison Ma, also won four of their 11 qualifying rounds. During two of their rounds they were solo, as their alliance partners were either disqualified or were a no-show.

According to Amber Jeskey, MSSM’s international coordinator and instructor of English as a second language, the competition was a truly global one, with more than 500 teams in attendance from countries such as: Paraguay, United Kingdom, Bahrain, Germany, Tunisia, Mexico, Colombia, United Arab Emirates, Egypt and Spain just to name a few.

“The students enjoyed meeting their alliances and forming strategies for success against their opponents. It was truly a positive experience,” she said. 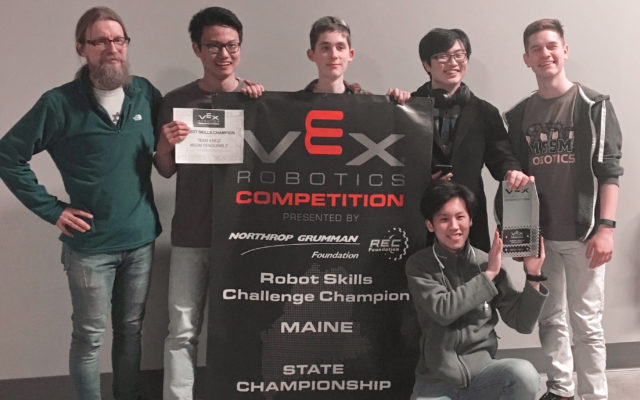 “Thanks to Texas Instruments, Robotics Institute of Maine, and MMG Insurance for sponsoring part of this trip, as well as the parents who made the long trek with us, Kathleen and Joel Pike and Betsy and Josh Chalmers,” Jeskey added. “We are truly grateful for your support.”

The state event attracted 50 teams of students from middle and high schools.

McCarthy said about being a VEX team captain that the experience allowed her to learn about applying robotics in the real world.

“Building the robot is only a small part of the larger design process. I have to keep track of what all of the team members are doing in a detailed engineer notebook and I’m also responsible for making sure they stay on track with our goals and deadlines for the robot,” she said.

“Being a captain is not an easy job and I have learned a lot of leadership skills as well as patience and organization skills.”

According to the Robotics Institute of Maine, more than 2,000 high school and middle school students are actively participating in the state’s various robotics competition programs.

“Unfortunately, our current education system is not adequately inspiring students in our state to pursue majors and careers in STEM fields. These competitions and the work and dedication required to get there help students develop STEM knowledge in a sport-like atmosphere, and the necessary skills to be successful in pursuing a technology-based career.”

Only one member of Maine’s congressional delegation had come out in favor of impeaching President Donald Trump ahead of House Speaker Nancy Pelosi’s Tuesday announcement that the Democratic-led House of Representatives would begin an impeachment inquiry.
Pets END_OF_DOCUMENT_TOKEN_TO_BE_REPLACED

Last week, we received a phone call about a cat that was in desperate need of help. The young lady said she found a cat that was very skinny and crying and that there was blood in the snow.
Campaign Corner END_OF_DOCUMENT_TOKEN_TO_BE_REPLACED