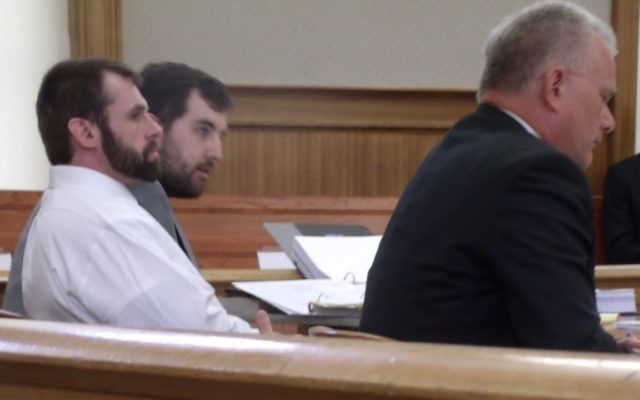 Jen Lynds • June 11, 2019
An Easton man accused of killing his stepfather was found guilty of murder and using a firearm to intentionally or knowingly cause the death of another in Aroostook County Superior Court in Houlton late Tuesday afternoon.

HOULTON, Maine — An Easton man accused of killing his stepfather was found guilty of murder and using a firearm to intentionally or knowingly cause the death of another in Aroostook County Superior Court in Houlton late Tuesday afternoon.

The jury deliberated for four and a half hours before rendering the verdict against James Peaslee of Easton, returning to the courtroom once to review some of the evidence. Jurors then returned to the jury room for approximately five minutes before returning with a judgment.

Paul Hilenski Sr. died from a gunshot wound to the chest after Peaslee, his stepson, came to his home in the early evening hours and fired multiple gunshots at him, according to court testimony. The 38-year-old was accused of killing Hilenski Sr., 79, in January 2018, at Hilenski’s Boundary Line Road home.

Peaslee was represented by attorneys Stephen Smith and John Tebbetts.

Assistant Attorneys General Leanne Robbin and Robert “Bud” Ellis contended that Peaslee was furious over a probate decision involving the estate of his mother, Janet Hilenski.

During closing arguments, Robbin said that Peaslee’s “resentment was building” after he learned that Hilenski Sr. was allowed to remain on the Boundary Line Road property after his mother died without a will, leaving the case to go through probate. Peaslee and his siblings received checks from the estate.

She noted that data showed that Peaslee’s phone was off for three hours on the day of the murder, which is when she said he was killing his stepfather.

She also reiterated statements from the testimony of Matthew Clark, who is incarcerated at the Aroostook County Jail on charges of theft, burglary and receiving stolen property.

Robbin said that Clark could not have learned all of the details that he knew about the crime through the media, as the defense alleged.

She also reminded jurors that Peaslee’s fingerprints were found on a box of .380-caliber ammunition and a tray taken from his home during a search.

In closing statements, Smith noted that Clark was a “thief and a burglar,” contending that he was only testifying in court in the hopes of receiving a lesser sentence in his upcoming court case. He also said that police officers who had identified Peaslee as the man in the security video couldn’t be “100 percent sure,” because they had not seen him often enough or close enough.

He also told jurors that the security video was “washed out” and didn’t clearly depict the shooter’s identity.

Jurors requested to see the security video once again before returning with a verdict, and also asked to have Hilenski Sr.’s E-911 call replayed. The victim was only able to tell the dispatcher that he had been shot and list his address and phone number before dying.

The defense had questioned several witnesses about Peaslee’s resemblance to his brother, George Peaslee, since the start of the trial. George Peaslee did not testify.

The victim’s security video recorded the shooting and its aftermath, including Hilenski’s death in his kitchen. An exterior video shows an individual run up the steps of the Hilenski home and knock on the door. He then fires several rounds into the home through the screen door and a window in another door. He then ducks, fires more rounds, and runs away.

An interior video showed the victim going to answer the door and being fired at. He is then shown reaching for a landline phone in the kitchen, sitting down in a chair, and quickly thereafter falling to the floor and dying. Hilenski Sr. had a gun holstered at his side, but was unable to get a shot off.

After the verdicts, Tebbetts said that he and Smith “clearly disagreed” with the verdict, but he thanked the jury. He said that Peaslee was “disappointed,” and that they would appeal.

Robbin said that she and Ellis were pleased with the verdict and that the jurors recognized that it was Peaslee in the video and not his brother. She also credited the jury for its extensive deliberation.

Hilenski Sr.’s family was present throughout the trial, but did not wish to address the media.

Peaslee will continue to be held without bail. A sentencing date has not yet been set.

Next year's Caribou City Council will include a new member and a longtime councilor thanks to Tuesday's election.
Pets END_OF_DOCUMENT_TOKEN_TO_BE_REPLACED

The snow and the cold weather has arrived. If we listen to everyone it is going to be a difficult winter.
What's Happening This Week END_OF_DOCUMENT_TOKEN_TO_BE_REPLACED