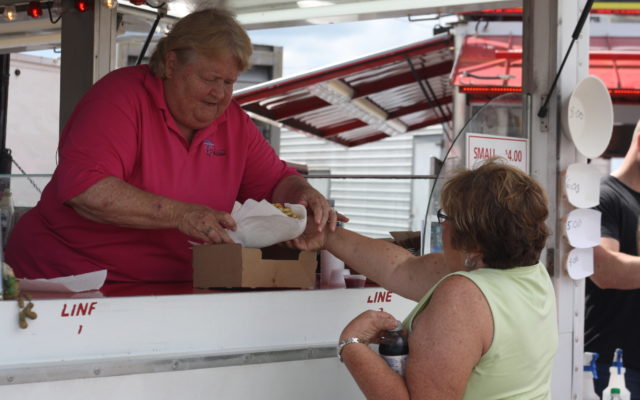 Melissa Lizotte • June 30, 2019
Fair-going King & Queen French Fry stand, with its Presque Isle roots, has been in the same family for nearly 70 years and is continuing its traditions at Northern Maine Agricultural Fair in Presque Isle this week.

“As soon as I learned how to make change at age 11, I was working with my parents,” said Webber, during a busy day at the Northern Maine Fair on Saturday, June 29.

Paul Aucoin is a Presque Isle native, now 94 years old, who began his french fry stand as King’s French Fries in 1952 before he married Webber’s late mother Thelma. He is a Navy veteran who throughout his life worked as a pressman for the local newspapers and then as the winter manager for The Pizza House, a former restaurant in Presque Isle that his brother owned.

After Paul and Thelma married they changed the french fry stand’s name to King & Queen French Fries. Webber assumed ownership in 1992 after Paul had back surgery and was no longer able to stand for long hours at a time during fair events. She is now celebrating the food stand’s 67th year in operation.

Though her parents previously attended every major summer fair in Maine, Webber and her team now serve fries at fairs in Presque Isle, Blue Hill, Fryeburg, Farmington and Acton and at the Waterboro Old Home Days. The Fryeburg fair, in particular, played an important role in how Paul and Thelma Aucoin met and became the “king and queen” of french fries.

When she was 7 years old, Webber attended the Fryeburg Fair with her mother and a cousin of her mother’s. Webber successfully convinced her mother to go on the dizzying Tilt-A-Whirl ride with her, after which her mother became sick. Paul Aucoin, who was operating King’s French Fries nearby, offered Thelma an empty grease bin for her to sit on and rest.

Initially, Thelma did not pay Paul much attention, even after her cousin pointed out how handsome he was. At least not until the family returned to the fair the next day and came across King’s French Fries.

“My mother saw how busy he [Paul Aucoin] was, so she jumped right in and started serving french fries with him,” Webber said. “Then she invited him to dinner and the rest, as they say, is history.”

Webber recalled that when longtime fair customers realized that her stepfather was nearing retirement many asked her, “What are we going to do?” The family had built a strong reputation for cooking homemade fries, using the “secret ingredient” of beef fat, and treating customers with kindness.

Webber decided that she wanted to continue those traditions.

In recent years Webber has retired from her full-time, 21-year career in fundraising at the Portland Museum of Art and looks forward to crisscrossing the state with the french fry stand at fairs every summer.

She previously worked in fundraising at Westbrook College for 11 years and said that throughout her career she used all her vacation days in the summer to devote her energy to the french fry stand.

The Northern Maine Fair, which this year took place from June 28 to July 3 and morphed into the Freedom Festival beginning on July 4, remains a special time for Webber, who now lives in Kennebunkport with her husband Bob Heap and stepfather.

It is not uncommon, she said, to see a line of people extend from the french fry stand to far down the midway on the busiest evenings of fair events.

“He’s from Presque Isle and he always loved serving the community,” Webber said, about Paul Aucoin. “I absolutely loved growing up in Presque Isle and it means everything to me that we’re still known for good service and good food.”

For many generations of people in Aroostook County, a trip to the Northern Maine Fair cannot pass without stopping by King & Queen for a steaming hot box of french fries.

Jamie Violette of Caribou paid the french fry stand a visit with her husband, Dana Violette, and son Connor on Saturday.

“It’s part of our fair tradition,” Jamie Violette said. “I think using fresh potatoes is what makes the fries so good.”

When she asked Connor if the King & Queen fries were better than store-bought fries he said, “Fair fries are better.”

These days Webber runs King & Queen with help from Heap, James Arey, a cousin of her stepson, and Heap’s nephew Robert Dunkin. Although she has yet thought of who might take over the business in the future, for now, Webber, 66, has no plans to stop serving customers.

“I plan to keep going for as long as I can,” Webber said. “It’s a wonderful feeling to know how much people appreciate the work we do.”

It was a freezing day across The County, but you could hardly tell from the turnout. Even after a massive surge in absentee ballot requests across the Central Aroostook area, droves of people came out to vote in Presque Isle, Mapleton, Washburn and Fort Fairfield.
Pets END_OF_DOCUMENT_TOKEN_TO_BE_REPLACED