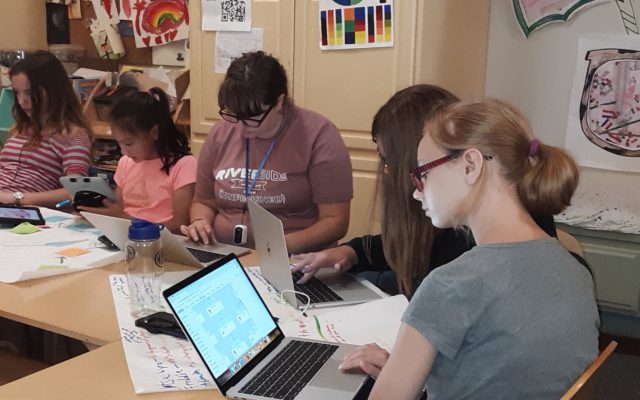 Twelve students took part in the AR Girls program held at Wintergreen. AR — which stands for “augmented reality” — Girls is a program of the Maine Mathematics and Science Alliance that has embarked on its second summer of giving girls opportunities to engage in arts and science-based community projects through augmented reality software.

Wintergreen became one of three sites in Maine chosen to host the two-week AR Girls program, in addition to Waterfall Arts in Belfast and Fiddlehead Art and Science Center in Gray. The students in Presque Isle focused on the theme of how physical wellness coincides with positive mental health.

“AR is like virtual reality, but instead of entering a different world you take places and objects from your world and put them in a digital world,” said AR student Diane Botting, 12. “You use computer coding to create a story that tells people important information that they need to know.”

For their project, students have used AR software to create a virtual storyline involving characters and digital interpretations of businesses and recreational venues near downtown Presque Isle that showcase their message.

When talking about the positive effects of physical recreation on peoples’ mental wellbeing, students will include Riverside Park and the Sargent Family Community Center as examples.

The students’ final project will consist of an AR Tour that they will showcase on Saturday, Oct. 12, at Wintergreen. Community members who attend the showcase can download an app for their cell phones and participate in the tour as they walk through downtown Presque Isle.

At each spot, the characters in the AR story will explain how the featured places can connect them with greater physical and mental health.

“I like that with this program we’re using technology and arts programming to help people,” said student Ava Powers, 12. “We’re showing that people who are connected with their communities tend to be happier.”

Students will participate in video conferencing chats throughout late summer and early fall to finish their components of the AR Tour together. The Wintergreen workshop portion ran from July 22 to Aug. 2.

“Part of our goals with AR Girls is to help girls see how the projects they create through arts and technology can help their community,” said Amy Kamarainen of MMSA. “The community partners they met with allowed them to see what local resources they can showcase.”

Wintergreen received a $4,000 grant from MMSA to support instruction for this year’s AR Girls program and will receive a $10,000 grant to purchase additional technology equipment for next summer’s classes.

She noted that AR Girls provides an important step for Wintergreen to expand both their offerings of digital art classes and programs for middle and high school students.

This fall Rowena McPherson, coordinator of graphic design, photography and social media for the University of Maine at Presque Isle, will offer a graphic design course as part of Wintergreen’s After-School Arts program.

“We hope to get kids excited about digital art and interested in careers that could expand their opportunities,” Hutchins said. “The MMG grant and AR Girls have helped us go in a direction that we may have never thought was possible before.”

Maine is more than eight months into Medicaid expansion under the federal Affordable Care Act and trends around who is enrolling and where they live are starting to emerge, bucking some expectations and pointing out access challenges.
Pets END_OF_DOCUMENT_TOKEN_TO_BE_REPLACED