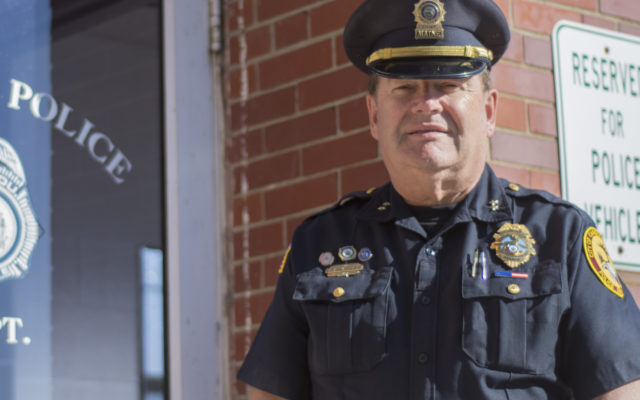 Chris Bouchard • September 6, 2019
Caribou police have handled more domestic violence cases this year thus far than in all of 2018, according to police chief Michael Gahgan. Police have dealt with 40 cases so far in 2019, which is six more than 2018’s grand total of 34 cases.

CARIBOU, Maine — Caribou police have handled more domestic violence cases this year thus far than in all of 2018, according to police chief Michael Gahgan. Police have dealt with 40 cases so far in 2019, which is six more than 2018’s grand total of 34 cases.

Gahagan said the spike could be the result of community organizations working together and encouraging victims to come forward and report the violence.

“People are more aware of reporting these incidents now,” he said, “whereas before a lot of people wouldn’t say anything. But now they are aware of the signs and conditions. They’re reporting it more often, so we see an increase.”

He said that while this results in an increase on paper, it’s also a “good indication that people are more aware” that they can do something about a domestic violence situation.

“If they see something,” he said, “they say something. In the old days, they wouldn’t say anything. Law enforcement is also better educated about the cycle of domestic violence, and the collaboration with the Hope and Justice Project and other social service groups is a benefit. It’s a team approach now, not just law enforcement.”

As a result, he said the increase does not necessarily indicate a definitive increase or decrease in how much domestic violence is occuring in the community, just that it’s being reported more.

“We’re not putting our heads in the sand anymore,” Gahagan said. “We’re actually doing something, and when we hear something from our neighbors, it’s being reported.”

The police chief said law enforcement saw a similar trend with child sex abuse, adding that once reporting of these incidents became more common, “we saw a big increase.”

To Gahagan, this is both good and bad.

“It’s bad that we have the abuse,” he said, “but it’s good that it’s being reported. Our major thing is getting people some help. Besides domestic violence, we also handle child abuse and mental health issues. It all goes up to law enforcement. We have to be the gatekeepers of society.”

One factor contributing to the increase in reporting is the media tendency to publicize domestic violence cases, according to Gahagan.

“When people read these reports,” Gahagan said, “a lightbulb comes on. Everybody understands the cycle of domestic violence. So it’s not just ‘Oh, it’s the weekend and Johnny is drinking again. It’ll pass.’”

Substance use, according to the chief, plays a significant role in domestic violence cases, with more than half of reported incidents involving the use of substances.

“Alcohol is still our No. 1 drug in Aroostook County,” he said. “I would say a high percentage of domestic cases usually involve alcohol.”

If someone believes they may be a victim of domestic violence, Gahagan recommends that they get in touch with the Hope & Justice Project, an organization dedicated to serving Aroostook County residents affected by abuse, and calling 1-800-439-2323.

With the Hope & Justice Project’s help, Gahagan said police are in “better shape now than we’ve ever been to help these individual’s break the cycle, or at least to understand it.”

Gahagan said that while abusers are almost always remorseful at the time and express that they would like to stop, it often takes multiple attempts for them to break that cycle.

“The decision is ultimately up to them,” he said. “Law enforcement can only do so much. We can act during the situation, and follow up with a protection order. And all of this contributes to breaking that cycle.”

Gahagan said the victims technically are not the ones pressing charges in these instances.

“They become witnesses,” he said, “but they’re not the ones pressing charges; the state is. The way the statute reads, we have no choice but to arrest the [abuser] at the time.”

Some warning signs that a person could be in an abusive relationship include the partner forcing the person to break off communications with family and loved ones, or not letting the person out of the house to see friends anymore.

“It’s really a control issue,” he said, “and these are signs that we see when we interview victims. Their abuser has to be with them at all times, and you may see them wearing long sleeved shirts or turtleneck sweaters in the summer to hide marks that were left on them.”

Gahagan said it can be difficult for someone to realize they’re being controlled, manipulated or abused.

“If you’re in love with somebody,” he said, “you don’t see what’s going on,” adding that it could “be a slow process that builds up” to verbal violence, physical violence, or both.

By collaborating with local organizations and adjusting their approach to consider the numerous factors that contribute to the cycle of domestic violence, Gahagan said law enforcement’s understanding and ability to assist victims of domestic violence is “better now than it has ever been.”

“Nobody has to be a victim of anything,” he said. “And I think our approach now is better. It’s not us vs. them anymore. It’s more of an understanding, and everybody’s looking out for the best interests of the individual.”

Gubernatorial candidate John Glowa said that he wants to spur government reform that truly creates a system of, by and for the people when he visited Presque Isle City Hall.
Pets END_OF_DOCUMENT_TOKEN_TO_BE_REPLACED

Many of you have been asking about our super popular “Toast to the Animals” celebration. After several COVID-19 cancellations and not being able to host this great fundraiser, we are finally ready to celebrate the animals once again and help support the Central Aroostook Humane Society.
What's Happening This Week END_OF_DOCUMENT_TOKEN_TO_BE_REPLACED