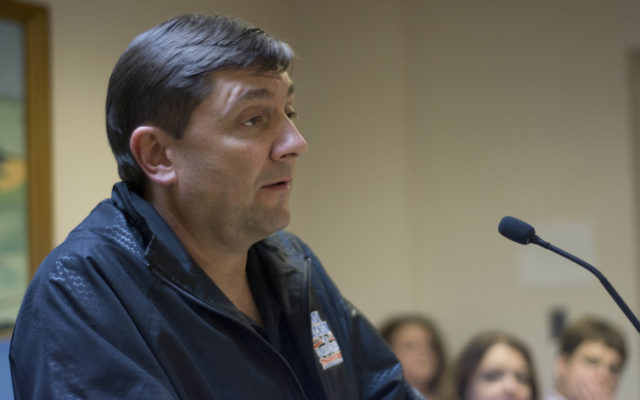 He attended a Caribou City Council meeting followed by a town hall at the Caribou Public Library on Sept. 23. The council meeting primarily focused on local government issues, while the town hall covered an even wider variety of topics.

Jackson said he wanted city councilors to know he could help if there’s hope to get a new business started in the area, and mentioned how he recently sponsored a bill to help food processing and manufacturing facility expansion. This bill was a significant benefit to the upcoming Penobscot McCrum potato facility in Washburn, and he told council he would love to partner with them if similar opportunities arise.

Above all else, he said his plan was to open up a discussion and “work toward something better for Caribou and Aroostook County.”

Mayor Mark Goughan thanked Jackson, and explained that he had asked City Manager Dennis Marker to organize a list of local concerns based on council discussion throughout the past year.

Marker told the Senate President that one of the primary issues is obtaining revenue from Maine Department of Transportation to help repair roads, adding that while the city is grateful for MDOT’s assistance with High Street, the city has other roads in need of repair.

Jackson said he sees this as a problem affecting not only Aroostook County, but the entire state of Maine.

“We are definitely challenged,” he said. “You can go into larger parts of the state and see that roads and bridges are deteriorating. We’re not keeping up, and I don’t think there’s anyone that can say we are.”

Marker said that in addition to revenue sharing, many in Caribou have expressed concerns about expanding broadband internet access.

On the subject of internet access, he said the state “needs to do better in that regard.”

He said he recently attended a special session in which the Legislature was presented with a “very modest proposal” to help with broadband access, but it did not obtain enough votes to pass.

Councilor Thomas Ayer asked the Senate President about the red flag bill, which would allow weapons to be taken away from an individual who has shown to be a danger to themselves. The Legislature passed a modified version of the bill, which Jackson said is “sometimes referred to as a yellow flag,” which only allows this to occur when a person is taken into police custody.

Jackson said the “yellow flag” bill is more in line with existing laws concerning people who are flagged for mental illnesses. Since a judge would have to sign off before law enforcement could confiscate a firearm, he said the modified version of the bill is “more in line with the common practices of judges making a determination that somebody is not feeling well.”

At the town hall meeting, Jackson responded to a resident who asked about the internet, and said that, in his current location in rural Caribou, he has to rely on 10 gb per month of data from a cell phone carrier.

“It’s unreliable and undependable,” he said, adding that Spectrum has offered internet access on his road, but would not extend the cable to his residence unless he paid them $3,000 to help with costs.

He agreed that internet across the state needs to be improved and said that his father-in-law, who lives in Allagash, owns and operates a business that is 95 percent internet-based. He said a boost in internet could not only attract more residents but also lead to economic development.

One resident criticized Jackson for voting in favor of LD 20 “An Act To Provide Coverage for Abortion Services for MaineCare Members,” which would utilize state money to fund “abortion services that are not federally approved Medicaid services.”

He said he had once depended on the Senate President as a “reliable pro-life vote,” and asked what had changed to motivate him to instead vote in favor of pro-choice legislation. He ended by saying his question came from a place of sincerity, and that he believes Jackson “is a man of great integrity.”

The Senate President said that while it was an issue he has struggled with, he was motivated by a testimony before the Legislature about low-income residents without adequate healthcare access who have to deal with issues such as stillborn births and major birth defects as well as instances in which “both the baby and mother were at risk.”

“In the end,” he said, “I thought that people who are low income should be able to have the same health services as other people. Am I excited about that? No, but in the end it’s for them to decide.”

One man asked Jackson how he felt about “illegals coming into Portland and being supported by taxpayer money” while citizens of Maine who need help are not receiving assistance.

“I think I started my career by blocking the border and making sure Mainers had job opportunities in the state,” he said. “I think my record is pretty clear.”

The Senate President said he believes work should be done on the federal side to allow immigrants the right to work while trying to obtain citizenship.

“A lot of places in the state are looking for more help and I think there should be opportunities for people to work while they’re waiting for citizenship,” he said, adding that “being a citizen and voting should mean something in this country.”

Jackson said on Sept. 26 that he was glad to have the opportunity to “get out there and hear directly from people about how they’d like government to work, and the issues that are important to them.”

He said that while he was aware of issues concerning rural internet access, his discussions with council and residents illustrated just how severe the problem is in some parts of The County.

“Caribou is by far the biggest city, in fact it’s the only city, in my district,” he said, “and if they’re struggling with internet access, we obviously have a problem.”

He said when the issue came up as a bond package, no Republican lawmakers in the state supported it, adding that he will make sure there is enough money in the upcoming session for rural internet access.

President Jackson plans to spend another day in Caribou on Oct. 21 in which he will meet with seniors, businesses and students. His visit to the council as well as the town hall meeting were the end of a day in which he met with seniors at 9 a.m., Cary Medical Center Administrators at 10 a.m., and also presented a sentiment to the Caribou Veterans Center in addition to visiting three local businesses.

“I’m just trying to be responsive and making sure people know that I know that my job is to represent people in Caribou and northern Maine,” he said. “They don’t have to wait for an upcoming public forum either. They can pick up the phone and call me. I just want people to know they can reach out.”