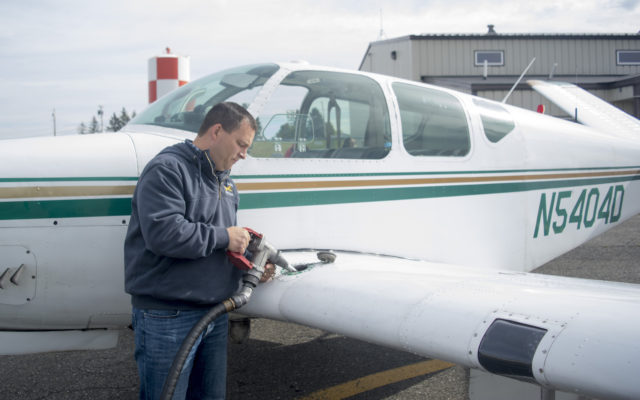 Chris Bouchard • October 9, 2019
Locals lined up for a chance to go on a 15-minute flight in a small plane Sunday, Oct. 6, for the city of Caribou’s “Fall Foliage Flying Event.” The rides featured about four planes and a plethora of refreshments at the city airport near Main Street.

CARIBOU, Maine — Locals lined up for a chance to go on a 15-minute flight in a small plane Sunday, Oct. 6, for the city of Caribou’s “Fall Foliage Flying Event.” The rides featured about four planes and a plethora of refreshments at the city airport near Main Street.

While the event was only scheduled from 10 a.m. to 2 p.m., flights for the entire day were booked solid by noon due to the abundance of guests. A total of 80 people embarked on 40 flights throughout the day, and the event ultimately raised $800 for the promotion of the airport and the support of residents interested in aviation and obtaining their licenses.

The event was hosted by the city and the Caribou Airport Advisory Committee, and many members of the group either donated their time to fly guests or helped coordinate activity on the ground. 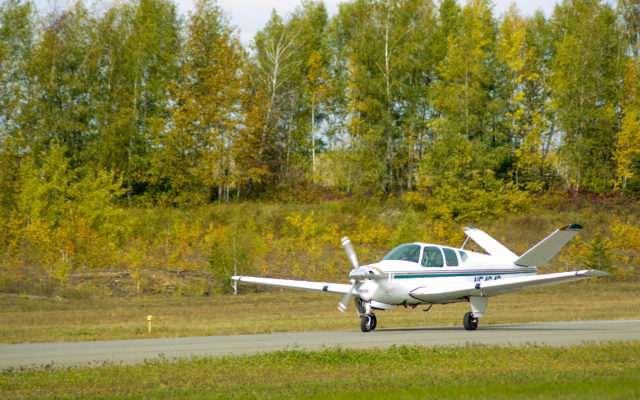 Chandler Tracy, who has been involved with the committee for about a year, coordinated flights and spoke with pilots via portable radio. Tracy said he primarily focused on making sure the pilots have enough time and that they’re still capable of flying “since flying all day long gets tiring.”

He said this is the third event the committee has held this year, with one event in June where guests would be weighed and pay 10 cents per pound for a flight. In August, they also held a “wings and wheels” event in which guests from around the state brought in their cars and planes.

The fall flying event was originally scheduled for Saturday, Oct. 5, but rescheduled due to a forecast of high winds. Tracy said while the flights could have possibly still occurred on Saturday, they were rescheduled to ensure passenger safety.

He said that when smaller planes hit air pockets upon landing, the turbulence can be more intense for smaller planes than a large commercial airline.

“It depends on how the wind hits the runway, it could be a crosswind,” he said. “If anything, it feels like you hit something; it pushes the plane up and it goes back down.”

Tracy started flight training roughly two years ago, and said he doesn’t think he will ever give up flying smaller planes. 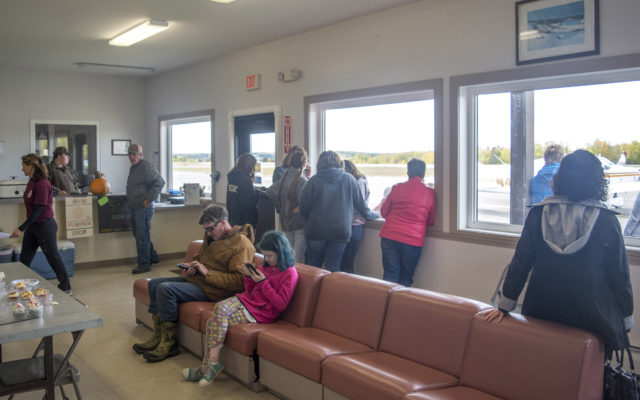 Guests line up in the Caribou Municipal Airport Lobby on Oct. 6 for a chance to fly in a small plane during a fall foliage flying event hosted by the city and airport committee. (Chris Bouchard)

Shane McDougal, Airport Committee president, was among the pilots flying guests during the event. He said the committee launched about a year ago, and includes City Manager Dennis Marker, who is also the municipal airport manager.

He said the flight consists of “a five mile loop,” featuring a nice view of Aroostook County’s fall foliage. This event, as well as the other two hosted in 2019, aims to promote Caribou’s airport, McDougal said.

“There’s this false notion that flying is expensive and it really isn’t,” he said. “If you buy a brand new snowmobile and run that, you’ll spend just as much money if you fly. Of course you can spend more, but to get into our flying club it’s a couple thousand dollars and then there’s an hourly rate to fly.”

The airport also has a couple of six bay hangars for storing planes, which McDougal said are now providing revenue to the airport.

“The airport is a community asset that’s a little underutilized at the moment,” he said, “but I think with the hangars, and events with aircraft it’s gaining more interest. It’s gaining traction.”

McDougal said anyone interested in learning more about the airport or getting involved with flight can attend one of the committee’s monthly meetings, which are held on the third Thursday of every month at 6 p.m. at the 12 Airport Drive facility.

Halfway Home Pet Rescue in Caribou has partnered with the Houlton Humane Society shelter for a cat spay and neuter clinic on Saturday, May 30, and Sunday, May 31, in Houlton.
Campaign Corner END_OF_DOCUMENT_TOKEN_TO_BE_REPLACED