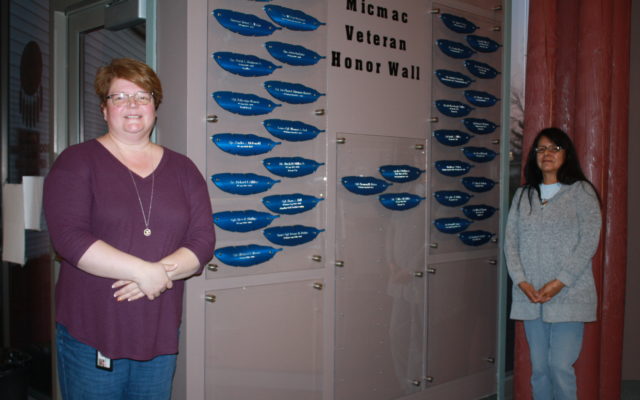 Melissa Lizotte • November 8, 2019
When Jennifer Pictou and Donna Sanipass of the Aroostook Band of Micmacs culture and historic preservation office decided to create a special exhibit to honor Micmac military veterans, they never guessed the number of stories they would find hidden within their own community.

PRESQUE ISLE, Maine — When Jennifer Pictou and Donna Sanipass of the Aroostook Band of Micmacs culture and historic preservation office decided to create a special exhibit to honor Micmac military veterans, they never guessed the number of stories they would find hidden within their own community.

Today, Pictou and Sanipass have now placed the names of 35 veterans on the new Micmac Veterans Honor Wall, located at the tribe’s Cultural Community Education Center, and expect to add even more in the near future.

“This has been four years in the making,” said Jennifer Pictou, director of the Micmac culture and historic preservation office. “It made sense to have something in our tribal community that honors military veterans.”

After several years of attempts to gain the right amount of funding and materials for the honor wall, the project came together through funding from the Maine Community Foundation, a Tribal Heritage Grant from the National Park Service and the Institute of Museum and Library Service. People from the Abbe Museum in Bar Harbor assisted in the recent assembly of the wall.

The Micmacs debuted the honor wall on Nov. 2 during the first Native American Heritage Month celebration.

The wall stands nine feet tall and is adorned with life-size aluminum eagle feathers that are one-foot long each. All the feathers contain the names of veterans, the branch of the military served and years of service. Students at Northern Maine Community College’s structural welding program designed and fabricated the feathers and will create more feathers for future names to be added to the wall.

“In our culture, being gifted an eagle feather is the highest form of honor,” Pictou said.

During the tribe’s annual Mawiomi celebration in August, veterans are the first Micmac people allowed into the Sacred Circle during ceremonies. The staff they carry is decorated with eagle feathers and only a veteran can carry the staff into the circle. Pictou noted that respect for veterans is deeply rooted in tribal ceremonies.

“If a feather falls from a dancer’s regalia during ceremonies, everyone pauses,” Pictou said. “The dancer retrieves the feather and presents it to a veteran.”

Through a separate grant project, Sanipass has been recording audio interviews with Micmac veterans, in which they relate stories of their military experiences. She has recorded 11 interviews thus far and said that she has only done so if veterans are willing to talk about their experiences. 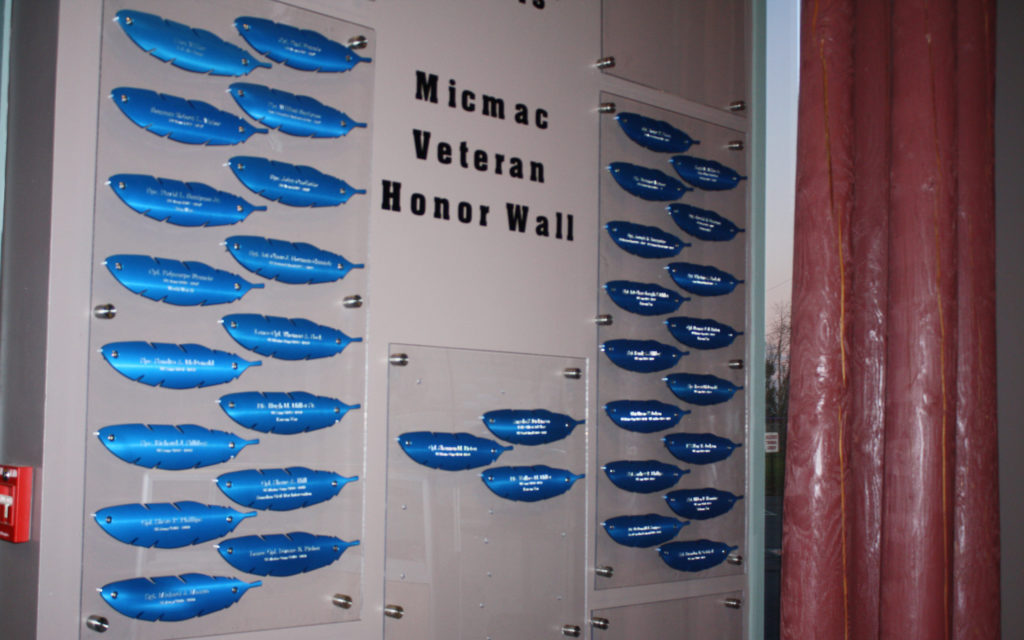 Sanipass’s father, uncle and nephew are honored on the new wall, while Pictou’s father and three brothers were veterans and her mother an Army nurse. Many Micmac veterans, they said, have never told about their time in the military due to painful memories or an insistence on moving forward in life.

“When I first created a database for Micmac veterans, I thought I might find at least 15 people that I knew of,” Sanipass said. “I actually found 52 veterans. This is the only formal list of veterans from the Aroostook Band of Micmacs that we have.”

Currently the wall features the names of 30 men and five women, including Sandra McDonald of Caribou, a member of the tribe. McDonald served in the U.S. Army from 1981 to 1987 before coming home to Aroostook County.

“This is the first time that I’ve seen Micmac veterans honored together, so it means a lot to me,” McDonald said.

Since publicizing the wall to their community through social media, Pictou and Sanipass have learned of more than 20 additional veterans who they plan to honor with the installation of more feathers. When the exhibit outgrows its current space, they plan to expand it to the wall space adjacent to the honor wall. They have heard from Micmac veterans from as close as Presque Isle to as far away as Texas and Wisconsin.

Pictou and Sanipass encourage veterans or family members of veterans who want to learn more about placing their loved one’s name on the wall to contact them at jpictou@micmac-nsn.gov or dsanipass@micmac-nsn.gov. They also encourage local teachers to use the honor wall as an educational resource to teach about Wabanaki culture and history.

Near the top of the honor wall is the Micmac phrase Kepmite’manej, which translates to “Let us honor our soldiers.” Pictou said that theme of respect is one that people have felt while viewing the wall.

“When we speak about our culture and heritage, we can never forget our veterans,” Pictou said.

Members of the Houlton Band of Maliseets will head to the ballot box in order to determine who will be elected as their new tribal chief.
Pets END_OF_DOCUMENT_TOKEN_TO_BE_REPLACED