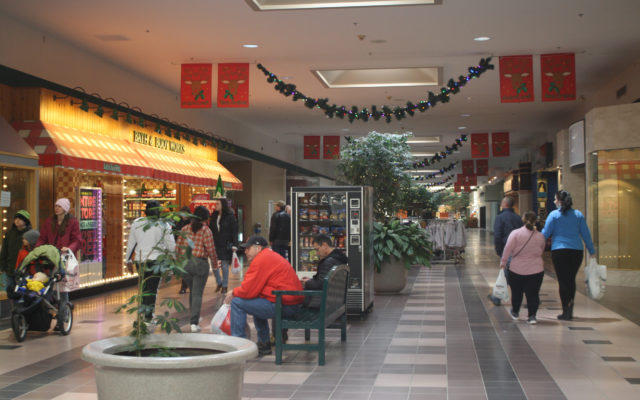 David Marino Jr. • November 29, 2019
The Aroostook Centre Mall saw an upsurge of people for Black Friday, a nationwide post-Thanksgiving shopping tradition that made its appearance in The County’s primary shopping center today.|

PRESQUE ISLE, Maine — The Aroostook Centre Mall saw an upsurge of people for Black Friday, a nationwide post-Thanksgiving shopping tradition that made its appearance in The County’s primary shopping center today.

Hundreds walked store-to-store throughout the morning and afternoon, buying things for themselves and keeping proactive on their holiday shopping lists.

The most popular store may have been Bath & Body Works, several customers undoubtedly driven to the shop by the “Buy three, get three” sale. More than 50 could be seen filling up the bath shop throughout the day.

JC Penney was another heavy hitter. Dozens flipped through clothing, many walking out with large shopping bags.

Some of the mall’s many other stores, including smaller local businesses, did not get as much traffic as the large chains. But they did seem to get an uptick from increased attendance throughout the mall.

Hope Chest Boutique, which sells a variety of antiques, had a steady stream of customers all day, four or five always being inside the store, according to an employee. The Catholic Charities-affiliated shop gives all of its proceeds to charity.

There was a litany of Black Friday shoppers from around The County, as well as the state.

James Peterson of Gorham came to the mall because he was visiting nearby family for Thanksgiving. He was happy with the deals he and his wife were able to get on ski gear at Olympia, though he wished the mall had an electronics store.

“It’d just be nice to see more stores come in,” Peterson said. “I know it’s a difficult economy up here, but it would be great just to have more.”

Abby Young had gone to JCPenney, Bath & Body Works, and Olympia. She said her interest in Black Friday was primarily because of potential savings, though so far she had only bought a pair of shoes from JCPenney.

“I’m just trying to find cheap things because we don’t got a lot of money,” Young said.

Louise Cyr of Woodland took the opportunity to take advantage of local deals and get some Christmas shopping done. Cyr said she appreciated that the mall was reasonably low-key; while there were undoubtedly a lot of people there, she said it wasn’t “crowded.”

Cyr was not the only one there on Friday who was not ready to participate in the frantic Black Friday phenomenon.

Haleigh Schools of Littleton happened to be in the area for a doctor’s appointment. She planned on checking out Bath and Body Works’ deals.

“Black Friday is not exactly my thing,” Schools said. “I prefer to order things online in my PJs.”

Of course, with Black Friday can come unfortunate incidents: violence and other disputes that can disrupt the shopping experience.

Security officer Cody Tucker said that, as of the afternoon, he had had no problems so far in the mall, saying that everybody seemed “pretty calm,” though he said contingency plans were in place if something arises.