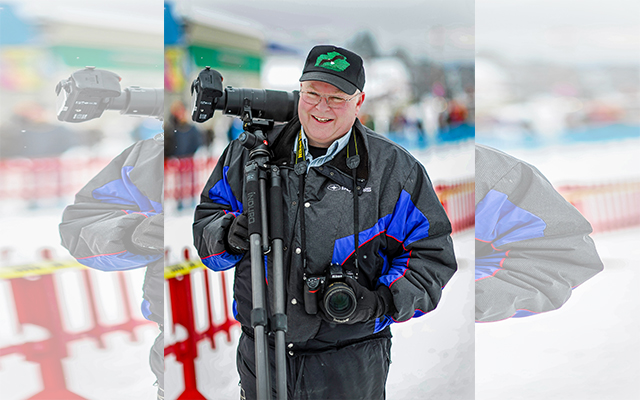 An opening reception and book signing will be held on Friday, Jan. 3, from 6 to 8 p.m., during Presque Isle’s First Friday Downtown Art Walk.

Cyr grew up on a potato farm in Hamlin.  He started taking pictures in the early 1960s with a Kodak instamatic camera, and photography soon became his lifelong hobby.  After moving to Presque Isle in 1976, Cyr’s photography took a back seat to his commitment to the family business, development of rental properties and the creation of a patented snowmobile component he manufactured for 25 years.  He now has more time to devote to his hobby.

“Paul has a unique ability to capture his surroundings in a way that evokes emotion and awe,” said Dottie Hutchins, Wintergreen’s executive director.  “His photographs are appreciated by people all over the world, and his total body of work is a legacy that will live on far beyond our lifetime.”

Along with enlarged prints of some of his photographs, Cyr’s latest book, “Northern Maine with Paul Cyr,” will be available for sale and to be autographed by the author.  His “2020 Northern Maine Birds Calendar” will also be available.

Cyr shares his work with over 50,000 followers on Facebook at Paul Cyr Photography.  His inventory of photographs is measured in the thousands and many are used by dozens of northern Maine towns and businesses for websites, report covers, tourist guides, and brochures, to mention a few.

People may also find Cyr’s photographs featured prominently in The Star-Herald and other local weeklies, the Bangor Daily News, as well as Barcraft Media (London), Mirror (London), Boston Globe, Yankee and Down East magazines and more.  Cyr’s work has been featured twice on the “Bill Green’s Maine” show.

I was mentioning to our board of directors this past week that I got a quarterly report from a large online retailer who will donate a portion of my purchases to a charity I select.
Campaign Corner END_OF_DOCUMENT_TOKEN_TO_BE_REPLACED