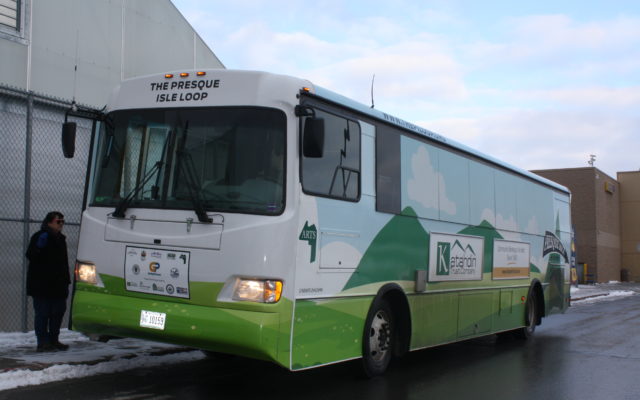 The Going Places Network, a group of community leaders that launched the PI Loop last fall, recently released statistics that show ridership data from Oct. 15 to Dec. 15, 2019. During that period, 1,267 riders of all ages and demographics used the bus, with 148 of those riders accessing the bus at Northern Maine Community College and 22 riders accessing the bus at the University of Maine at Presque Isle.

LeRae Kinney, co-chair of the Going Places Network, said on Thursday that Walmart and Carmichael Street remain the other most popular stops based on rider data and feedback.

Data indicates that of the 1,267 riders who utilized the bus during the first two months, 819 riders were single-fare users, meaning they paid $1.75 for a single trip. Eighty-one individuals benefited from available discounts, including military veterans, children under 18 years old and adults 60 years and older.

“We’ve seen all demographics benefit from the bus service,” Kinney said. “There have been many students using the bus as well as people going to and from work and people planning their shopping and medical appointments around the bus schedule.”

Kinney noted that feedback from riders has become a crucial part of how the Going Places Network has collected data and made decisions to positively affect riders’ experiences. That feedback includes opinions on potential changes in bus stop locations and how winter weather has affected people’s access to the bus.

For instance, the Going Places Network plans to soon change the Parsons Street stop in front of Winnie’s Restaurant and Dairy Bar to the Save-A-Lot parking lot across the street. With Winnie’s closed for the winter, Kinney said, the restaurant’s parking lot is often not plowed in time, making the space a less than ideal one for people who are waiting for the bus.

“We were also concerned about people crossing the street in such a high-traffic area,” Kinney said, referring to riders who walk across the street from Winnie’s to Save-A-Lot.

One of the major factors that has affected ridership has been winter weather. This winter the PI Loop bus has had to end the daily route early on four days thus far due to harsh weather. Snow and cold winds has discouraged many people from standing outside to wait for the bus.

For those reasons, the Going Places Network is working with the city’s public works department to prepare for winter weather and identify areas that are plowed and maintained most often. The group plans to purchase and install shelters this spring for bus stops that do not have close access to a building in which folks can wait for the bus.

Bus stops with shelters will likely include lower Academy Street, Carmichael Street near the Presque Isle Housing Authority and the entrance to the Helen Noreen Apartments.

“We have worked closely with the city and landowners to make sure we keep the bus stops plowed and safe,” Kinney said.

The Going Places Network has already begun discussing how to expand bus services to more residents with a second bus and fixed route. Kinney said that the biggest concerns that she and colleagues have heard among riders relates to the difficulty of accessing areas of the city that aren’t covered with the current route.

Though the PI Loop bus stops at 16 locations — from UMPI to the Sargent Family Community Center and back around — the bus remains committed to that same fixed loop during the bus schedule. This means that once the bus leaves a certain location it won’t return until an hour or more later in order to stick with the scheduled route.

“If someone had to go from Carmichael Street to Walmart, it would only take them 20 minutes. But it could take that same rider 55 minutes or more to get home,” Kinney said. “The current loop does not get everyone to and from their destinations in a timely manner.”

To begin a second bus loop, the Going Places Network would have to go through much the same process that took place for the launch of the PI Loop, including securing funds from community donors. The second bus would serve areas that many residents have said are in need of bus services, such as residential streets near the Skyway Industrial Park, The Forum and Northern Maine Fairgrounds.

Though the Going Places Network does not yet have a timeline in place for implementing a second bus, it encourages community feedback via its website, Facebook page and face-to-face interactions.

“If we really want to continue making a difference, we need to make smart decisions based on rider feedback,” Kinney said. “We want people to know that we’re paying attention to what they had to say.”

Next year's Caribou City Council will include a new member and a longtime councilor thanks to Tuesday's election.
Pets END_OF_DOCUMENT_TOKEN_TO_BE_REPLACED

Everyone who enjoys the company of a dog knows that sometimes dogs have strange behaviors.  They may arrive in your life with the behaviors already in place, or perhaps they are adopted as a puppy and develop a behavior young.
What's Happening This Week END_OF_DOCUMENT_TOKEN_TO_BE_REPLACED