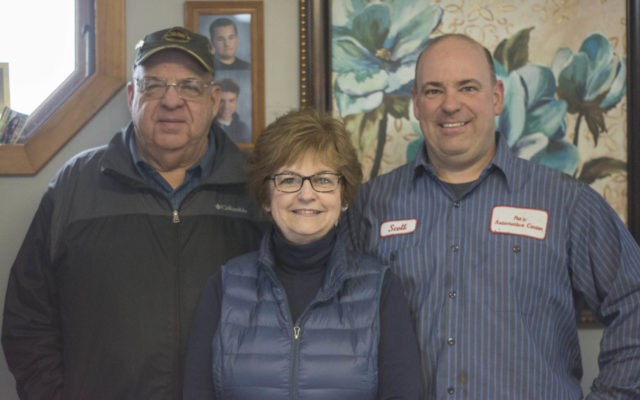 Sixty years later, the business has continued throughout three generations with Pat’s son Wayne, his wife Mary Lee and their son Scott operating the full service station and garage.

When Patrick Belanger retired in 1985, he turned the business over to Wayne, who became the owner and manager, and Mary Lee, who handles finances and bookkeeping. Their son Scott, who is now a Master ASE certified technician, was later brought on board and specializes in handling issues related to the constantly evolving world of automotive and diagnostic technology.

Mary Lee Belanger said that throughout the years, the business’ dedication to customers has been key to keeping the doors open for over half a century.

“We are committed to serving our customers to the full capacity and to the best of our knowledge, and our customers are dedicated to us in return,” she said. “We’ve had customers come through the door for over 50 years now, with loyal customers in the second and third generations of their families.”

Aside from the neverending task of keeping up with the rapid pace of automotive technology, she said other changes have included adding three more doors to the shop in 1986, when at the time the shop only had two doors.

They also made the decision to specialize in automotive diagnostics, a risk that paid off well, according to Mary Lee Belanger, who said it’s been a tremendous asset for the business.

“If you’re not up to date, you quickly fall behind. Software is becoming very expensive, but you have to keep up with it in order to keep the doors open. We commend our son Scott for that; he’s been with us since he was in high school,” she said of new automotive technology.

Looking ahead, Mary Lee Belanger said that while she would like to see the business hit another significant milestone, she and her family have “seen a great decline in knowledgeable, educated technicians.”

“Unfortunately, kids graduating from high school are not going into the automotive industry, as well as a lot of the trades. So we, along with other communities and other companies, are really reaching out and hoping that these kids will learn a trade. Because it’s very important and there’s a big demand,” she said.

She said the issue is not unique to Pat’s Automotive, and that “probably every automotive repair shop in Caribou” is experiencing a similar shortage in properly trained employees.

The rapid pace of technology’s integration with automotive work may also be contributing to the issue as they can no longer hire a “backyard mechanic,” though many have applied, she said.

“You need to have a certified technician now, and it puzzles me why the students aren’t going into the field. It’s a great field to get into and you’re guaranteed to get a good job,” she said.

While the couple are preparing for retirement, Mary Lee Belanger said she hopes to see the business continue into the future with their son at the helm.

“We’re a full service station, which is unusual today,” she said. “People can come in for gas and get an oil change or an inspection, and a lot of our customers appreciate that. It’s a nice calling card.”