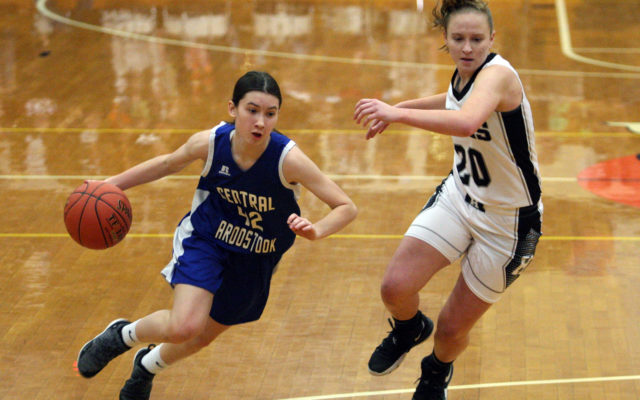 David Marino Jr. • February 10, 2020
Nine of the 12 teams in The Star-Herald’s coverage area landed a spot in the Maine Principals’ Association basketball tournament, each looking to bring a gold ball home to its adoring hometowns.

PRESQUE ISLE, Maine — There is little doubt that Presque Isle and surrounding communities are basketball country. That enthusiasm, even in communities that are primarily rural and sparse, has paid dividends for the teams heading to the playoffs.

Nine of the 12 teams in The Star-Herald’s coverage area landed a spot in the Maine Principals’ Association basketball tournament, each looking to bring a gold ball home to its adoring hometowns.

The postseason begins on Tuesday, Feb. 11 and Wednesday, Feb. 12, with a series of preliminary-round games that will determine who will play in Bangor. For those who lose, it means a season ended and playoff hopes dashed. But for the lucky winners, it means the potential to make a mark on a statewide stage.

The Presque Isle girls finished third in Class B North with a 15-3 record. The Wildcats will get a bye before heading to the Cross Center in Bangor for a quarterfinal game at 3:30 p.m. on Friday, Feb. 14.

The Washburn girls (9-9) ranked sixth and Ashland (8-10) is ranked eighth in Class D North. While Ashland will need to win a prelim against Jonesport-Beals (6-12) on Feb. 11 to move on, Washburn secured a place in the quarterfinals against Katahdin (13-5) in Bangor 7 p.m. Saturday, Feb. 15.

Easton (1-17) did not qualify for the playoffs.

The Presque Isle boys (7-11), ranked 14th in Class B North, will not make the playoffs after a home loss to Caribou on Feb. 6. 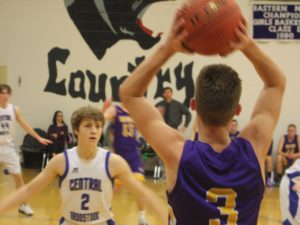 No. 3 Presque Isle (15-3) versus winner of No. 6 Winslow/No. 11 Caribou prelim — The Wildcats will play either the Black Raiders or the Vikings on Feb. 14 at 3:30 p.m. in Bangor. Presque Isle is 2-0 against Caribou this season, having beaten them by 10 points or more in both matches. Presque Isle coach Jeff Hudson described Winslow, who Presque Isle has not played against this season, as the “sleeper of the tournament.” He said a match against Winslow would be difficult because of the team’s “strong, talented” guards and high-scoring players. No matter who it faces, Presque Isle will have sophomore Faith Sjoberg (averaging 13 points a game), freshman Anna Jandreau (averaging eight points a game), senior Maggie Castonguay (averaging seven points, five rebounds and two steals a game) and senior Libby Moreau (averaging six points, six rebounds and two steals a game). 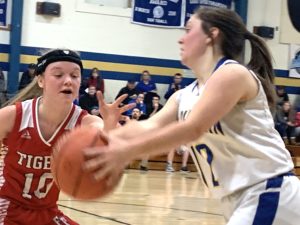 Fort Fairfield’s Camryn Ala attempts to force a turnover from Washburn’s Emma Johnston in a game in January. (David Marino Jr. | The Star-Herald)

No. 6 Washburn (9-9) versus No. 3 Katahdin (13-5) — The Beavers will take on the Cougars at 7 p.m. on Feb 15 in Bangor in what could be a tough match for Washburn. Katahdin defeated Washburn in both of its regular-season matchups —  48-22 at home on Jan. 4, and 51-25 on the road Jan. 25. Given that each match was decided by 26 points in Katahdin’s favor, Washburn faces a steep climb but not an impossible one. Washburn coach Jon Poisson said his team’s familiarity with Katahdin could help as they look to move on in Bangor.

No. 9 Jonesport-Beals (6-12) at No. 8 Ashland (8-10) —  The Royals faced the Hornets in Ashland Feb. 11 in a prelim game. While both teams have losing records, the prelim will decide who is to take on undefeated first-seed Southern Aroostook 3:30 p.m. Monday, Feb. 17, in Bangor. Ashland has a better record than Jonesport-Beals, but it will need to size up with an unfamiliar squad, as neither team played each other in the regular-season. 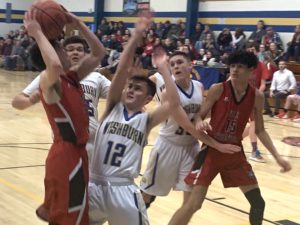 Several players, including Washburn’s Aidan Churchill, center, and Fort Fairfield’s Kadin Barnes, right, struggle for the basketball in a game at Washburn on Monday, Dec. 31. (David Marino Jr. | The Star-Herald)

No. 12 Penobscot Valley (8-10) at No. 5 Fort Fairfield (12-6) — The Tigers take on the Howlers at home in a prelim match Wednesday. Fort Fairfield Coach Vaughn McLaughlin said his team would be working on its shooting in preparation for the game, and would also test out new defensive schemes that will adjust to Penobscot Valley’s strengths. McLaughlin said his top offensive players were Dawson Watson, who he also noted had shown great floor leadership, Colby Langner and Kadin Barnes. He credited the team’s defensive prowess to the intensity of Grayden and Chase Griffeth, who happen to be cousins.

No. 6 Easton (12-6) versus No. 3 Van Buren (15-3) — The Bears will take on the Crusaders in a quarterfinal 9:30 a.m. Monday, Feb. 17, in Bangor. Easton coach Bradley Trask described Van Buren as a solid team that is disciplined both offensively and defensively. Trask said that the offensive stats for his team were pretty balanced, with there always being the potential for a different leading scorer every night. As he makes it to Bangor in his first season with Easton, Trask said his team’s hard work provided them the opportunity to show its strengths to a wider audience. 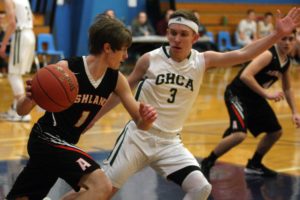