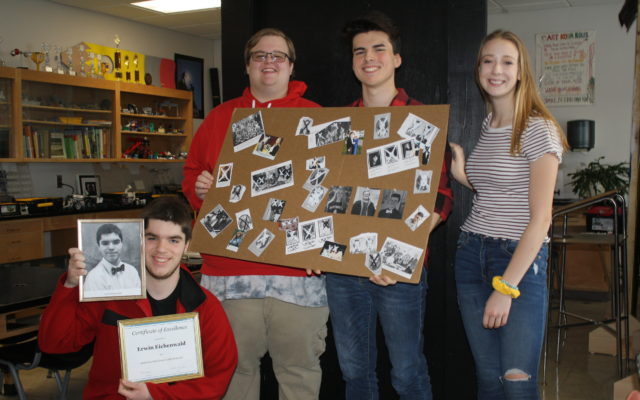 Melissa Lizotte • February 14, 2020
Students in the Gifted and Talented program at Fort Fairfield High School are on their way toward completing a film project.

FORT FAIRFIELD, Maine — Students in the Gifted and Talented program at Fort Fairfield High School are on their way toward completing a film project that has taught them much about working collaboratively as a team and bringing their creative ideas into one vision.

Last year Skyler Ouellette, Jessica Halsey, Colby Giberson and Sam Butler — who are all seniors — wrote a script called “Nightmares in School” that they later turned into a play and performed for their school. Throughout the 2019-2020 school year, the students have been adapting their script into a short film with the same title.

The story of “Nightmares in School” follows three high school students, Charlie, Veronica and Mason — played by Ouellette, Halsey and Giberson, respectively — whose lives become intertwined with that of a long lost student named Erwin Eichenwald, played by Butler, who disappeared in the 1950s.

When Charlie discovers a mysterious tall black door, he and his friends get trapped in an alternate reality where they realize that Eichenwald has been brainwashed and encouraged to bring other students into the dangerous alternate world. The students’ mission is to stop Eichenwald and make him realize his real identity before he turns them all into his “masked people.”

Ouellette described the movie as reminiscent of classic horror films, with black and white cinematography and production design and camera angles that emphasize a realistic but scary depiction of the story.

“We decided to use a handheld camera because we wanted the camera movements to look shaky and add to the creepiness of the film,” Ouellette said.

All four students alternated between taking the various roles of the film production such as directing and cinematography whenever they were not acting in a scene.

They filmed the majority of the script on a recent Saturday and have only two scenes left to film before moving to the editing process. They recruited many student extras, and even their GT teacher Renee Felini, to play Eichenwald’s “masked people.”

“Having the school to ourselves really added to the feeling of emptiness,” Halsey said. “The black and white is meant to show how boring and repetitive Erwin’s world is.”

Writing and shooting a short film was a first-time experience for all four students, one that encouraged them to be resourceful with the materials they had to work with and considerate of one another’s ideas.

For a scene in which the character Charlie discovers a room with clues about Eichenwald’s past, the students made copies of old photographs from Fort Fairfield High School yearbooks and created black and white photos of themselves to represent their characters as being Eichenwald’s next intended victims.

Unlike performing in a live play, the students found that shooting a film often requires numerous takes to get a scene just right. The filmmaking process also allowed them to learn time management skills, how to fit the project into their school schedules, collaborate as members of a team and work through disagreements.

“Even if none of us become filmmakers, there will always be people that we’ll need to work with for the greater good of a project,” Giberson said. “There were times when each of us had to decide if we should be a leader or a follower.”

Butler said that he has enjoyed writing scripts for fun for many years now and that being part of the GT film project has fueled his career interest in film production.

“I think this might be one of those experiences that I look back on as helping me grow in the performance arts,” Butler said.

Instead of taking traditional classes, students in Aroostook Regional Gifted and Talented are nominated by their teachers to become part of the program and take part in special projects related to performance arts, visual arts or academics that challenge them to complete tasks more similar to what they’ll face in the real world.

Felini hopes that the students who were part of the film project feel inspired to become lifelong learners and incorporate the knowledge and creativity they’ve gained into their lives after high school.

“I always enjoy seeing them go through the creative process and growing because of that,” Felini said. “Through visual arts they really get to think deeper about what decisions they’re making and share different sides of themselves.”

Only one member of Maine’s congressional delegation had come out in favor of impeaching President Donald Trump ahead of House Speaker Nancy Pelosi’s Tuesday announcement that the Democratic-led House of Representatives would begin an impeachment inquiry.
Pets END_OF_DOCUMENT_TOKEN_TO_BE_REPLACED