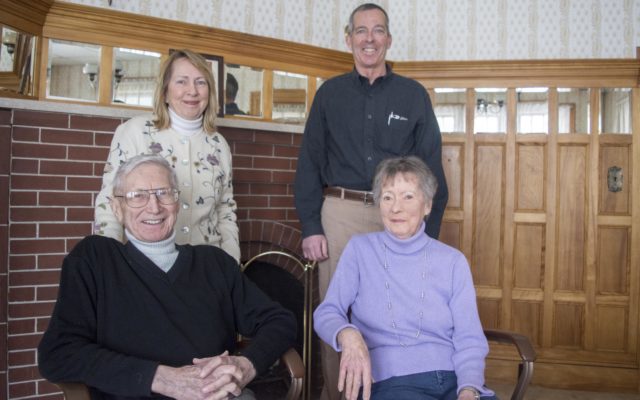 Chris Bouchard • February 14, 2020
Mahoney’s Real Estate has been a part of Caribou for 60 years. As Graydon and Martha Mahoney are looking toward retiring, they are transitioning their clients to RE/MAX.

CARIBOU, Maine — Mahoney’s Real Estate has been a part of Caribou for 60 years. As Graydon and Martha Mahoney are looking toward retiring, they are transitioning their clients to RE/MAX — managed by the husband and wife team of Rob and Lehrle Kieffer.

Graydon Mahoney started the business in 1960, shortly after which his wife Martha came on board and soon became president of the company. Since it began 60 years ago, Mahoney’s Real Estate has been in seven locations, three of which were lost to fires.

The Mahoneys moved to their seventh location — a large house on High Street — in 1989, where they remained for three decades.

Rob Kieffer said that while the Mahoney name will not continue into the future, all current Mahoney clients will be added to RE/MAX’s clients.

“We’re trying not to leave anyone in the lurch who may have had some listings out there with Mahoney’s,” said Rob Kieffer. “If any of their customers have a real estate question, calling Mahoney’s will send them in our direction.”

Both Graydon and Martha Mahoney are highly recommending RE/MAX as a qualified agency to carry the torch and serve some clients that have been loyal to them for decades.

“We have known the Mahoney family for a long time and I don’t think we’ve ever had a harsh word on a business dealing,” Rob Kieffer said. “We don’t always agree on everything, but I don’t think we’ve ever walked away so we couldn’t talk to each other. And that was part of what attracted us to establishing this relationship. We want to do everything in our power to keep their clients satisfied.”

“This is the oldest real estate agency in our area, and they have a lot of clients that still need servicing,” said Lehrle Kieffer.

Rob Kieffer said the agreement was initiated a few years ago when he suggested that he could help the Mahoneys out with a transition if they ever considered retirement.

Shortly after Mahoney’s office manager Ruth Harvey retired — which Martha Mahoney said was on the day of her 65th birthday — the Mahoneys began to seriously work with the Kieffers on the transition, which was made official last fall.

The Kieffers said Mahoney’s is a significant part of the city’s history and they are looking forward to helping with the transition.

Before starting the business on March 1, 1960, Graydon Mahoney said he was working as a tax assessor.

“I didn’t want to do that for the rest of my life,” he said. “We were thinking about moving to Portland, which I’m awful glad we didn’t do, because everything worked so well for us here.”

Graydon Mahoney said he did not know that a real-estate license was required before starting the business, and that luckily he was able to take a special exam with the commissioner.

“I was lucky to pass,” he said with a laugh. “I’d already paid for the business.”

When Martha came on board, she quickly began specializing in nearby camps. For years, the business took out full-page ads in the Aroostook Republican newspaper, many of which would highlight Martha as the agency’s “camp specialist.”

“I loved, loved, loved doing camps,” Martha Mahoney said. “If somebody came in the door and said they were interested in buying a camp, I’d say ‘let’s go!’”

“It’s something we enjoy doing as well,” said Rob. “I have my guide’s license and I’m going to be doing more land and camps in the future. We anticipate that it’s something we’ll hopefully do more of.”

“And it gets Rob out of the office,” Lehrle Kieffer said with a laugh.

The two also ran Kieffer Insurance, which was recently sold to United Insurance.

“So, rather than retire, I’m jumping into our other business, which is real estate,” Rob Keiffer said. “Graydon has done a lot of commercial and residential work. Generally, you can’t just do one thing up here.”

“You can’t be too specialized,” said Lehrle Kieffer. “The area isn’t big enough for that.”

Looking ahead, RE/MAX will be handling farms, commercial, residential, camps, land and foreclosures.

Throughout the years, Mahoney’s Real Estate has served thousands of clients, and the Mahoneys said they couldn’t be happier to see their clients go to the Kieffers.

“I’m going to get choked up,” said Martha, “but this means our agency doesn’t have to die; it can go on.”

“You’ve developed a very nice business,” Lehrle told her, “and a nice reputation during your long tenure, so you’re right, it won’t die.”

“I’m tickled to death about it,” Martha Mahoney said.

“It’s been a great journey,” said Graydon Mahoney. “I can’t imagine being in Portland or a bigger city.”

Only one member of Maine’s congressional delegation had come out in favor of impeaching President Donald Trump ahead of House Speaker Nancy Pelosi’s Tuesday announcement that the Democratic-led House of Representatives would begin an impeachment inquiry.
Pets END_OF_DOCUMENT_TOKEN_TO_BE_REPLACED

We think a cat can make for the best pet in the world. To truly love a cat, you must learn to accept them for what they are -- unpredictable and quirky, which is something unique and unlike any other pet.
Campaign Corner END_OF_DOCUMENT_TOKEN_TO_BE_REPLACED