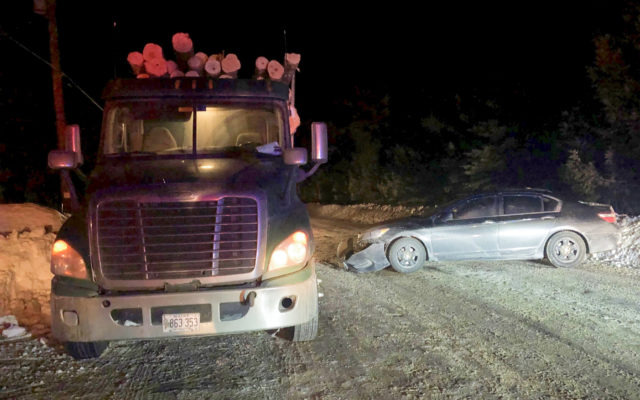 Paula Brewer • February 20, 2020
Police cited improper parking and speed as factors in a crash on Wednesday that occurred when a juvenile driver failed to see a parked logging truck on Gentle Road.

MONTICELLO, Maine — Police cited improper parking and speed as factors in a crash on Wednesday that occurred when a juvenile driver failed to see a parked logging truck on Gentle Road.

An unnamed juvenile was driving west in his 2016 Honda sedan at about 7:15 p.m. Wednesday when he struck the loaded 2013 Freightliner, operated by Robert Cox of Monticello, Maine State Police said. The truck was parked on the roadway and had no lights or flashers operating.

Police said the driver saw the log truck at the last minute and attempted to swerve around it, but hit the back of the trailer. He was wearing his seat belt.

Trooper Ryan Kilcollins responded and was assisted by Monticello first responders and Houlton Ambulance. The youth was transported to Houlton Regional Hospital with non-life-threatening injuries.

Police did not say whether Cox, who works for Bartlett Forest Products, was in or near the vehicle at the time of the crash.

The Honda was towed from the scene and the logging truck was taken out of the roadway to a nearby lot.

Cox received a summons for parking to obstruct traffic and the juvenile received a traffic summons.

The investigation is ongoing.

At the Houlton Humane Society, we take adopting the cats and dogs in our charge very seriously.
Campaign Corner END_OF_DOCUMENT_TOKEN_TO_BE_REPLACED