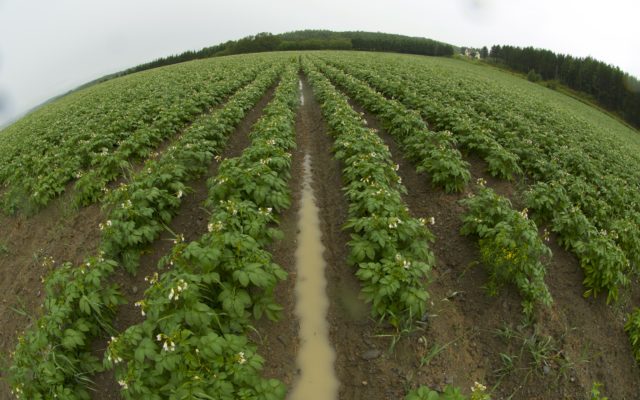 Melissa Lizotte • February 24, 2020
Farmers in northern Maine have become more aware in the last decade of how weather pattern changes attributed to climate change have affected the ways in which they plant and harvest their annual potato crops.

PRESQUE ISLE, Maine — Farmers in northern Maine have become more aware in the last decade of how weather pattern changes attributed to climate change have affected the ways in which they plant and harvest their annual potato crops.

To highlight farmers’ perspectives on these changes John Jemison, extension professor of soil and water quality for the University of Maine Cooperative Extension, interviewed 14 farmers in Maine — 12 in northern Maine and two in central Maine — and 11 farmers in Colorado in 2011 and 2019 and compared his findings.

Jemison recently shared his research during Maine Farmland Trust’s annual Healthy Soils, Healthy Farms conference, held at the University of Maine at Presque Isle on Wednesday, Feb. 19. He said he chose to interview farmers in both Maine and Colorado to compare how farmers respond to differing climate patterns, with Maine experiencing more moisture from precipitation and Colorado enduring more dry periods.

In 2011, farmers in northern Maine noted that they were aware of potential changes in weather patterns but were not experiencing major disruptions in their planting or growing seasons.

“The fall seasons have become particularly warmer, but to grow potatoes we typically like to have cool weather,” Jemison said. “When you have cooler weather, your potatoes are cold when they go into storage and are of better quality.”

The same group of farmers told Jemison that they have seen more intense periods of rain followed by longer dry periods during the planting and harvest seasons.

“One farmer said that in the past they might see one inch of rain over a two-day period, but now it’s common to get one inch of rain in 45 minutes, then no rain for two or three weeks,” Jemison said.

More rain can easily lead to increased soil erosion in which excess rain water soaks the fields and decreases the potential quality of potato crops. Based on the results of his studies, Jemison spoke in his presentation about the importance of farmers continuing to invest in healthy soil practices.

While farmers in Colorado have been able to implement large-scale systems to drain and divert excess water from potato fields, northern Maine’s often less predictable weather patterns would make the creation of elaborate systems difficult for small farmers.

“Some years you don’t need irrigation [in northern Maine],” Jemison said, referring to the dryer weather in Colorado that presents a more consistent need for bringing water to the fields.

Jemison recommended that farmers continue to track the changing weather patterns of Maine and seek out possible ways to protect potato crops against damage. He emphasized that despite the often political tension surrounding talks of climate change, northern Maine farmers take seriously the act of producing quality crops.

“Our farmers are trying and they care about making their farms resilient for the future,” Jemison said.

Gubernatorial candidate John Glowa said that he wants to spur government reform that truly creates a system of, by and for the people when he visited Presque Isle City Hall.
Pets END_OF_DOCUMENT_TOKEN_TO_BE_REPLACED

There are so many types of personalities when it comes to pets.  “Shy” is a word that some folks use to describe cats and dogs who are fearful. Many times this “shyness” is a fear of strangers, but it can also be fear of being picked up and handled, new places or sudden movements or noises.
What's Happening This Week END_OF_DOCUMENT_TOKEN_TO_BE_REPLACED