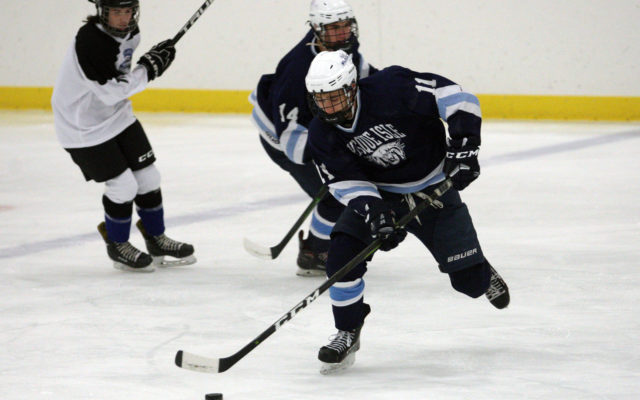 David Marino Jr. • February 24, 2020
After a season in which it made its hometown proud with a division-leading offense, the 2019-20 Presque Isle hockey team will play in the Class B hockey tournament.

PRESQUE ISLE, Maine — After a season in which it made its hometown proud with a division-leading offense, the 2019-20 Presque Isle hockey team will play in the Class B hockey tournament.

This playoff berth is far from the first for Wildcats coach Carl Flynn, who has made the postseason in 13 of his 15 years coaching the squad. Last year, Presque Isle beat JohnBapst/MDI/Bangor Christian in the Class B North quarterfinal 4-1. But the Wildcats were edged out by Waterville/Winslow 6-5 in the next round, dashing its championship hopes.

Flynn said he was thrilled to have secured a home quarterfinal game with a top-four finish. To succeed against Gardiner, he believes his players need to resist committing penalties and maintain the high-intensity offense they’ve shown in the regular season.

“We need to play our game, which is speed and finesse,” Flynn said. “We need to try to overwhelm the other team’s defense.”

Presque Isle’s offense is among the best in its division, averaging six goals a game and scoring nine or more in three games this season. It’s unsurprising it has had such a dynamic offense: three of its players have some of the best offensive numbers in Class B.

Both Carlisle and LeTourneau led Class B in points, the only players in the division to make it over 60. DeMerchant came out fourth in points while leading the division in assists.

Carlisle, LeTourneau and DeMerchant all made it to the 100-point milestone this season. Sophomore Jonah Roy (21 points), sophomore Quinn DeMerchant (19 points) and senior Colby Bonville (18 points) will also be players to watch in the playoffs.

Though not as high-leveled as their offensive production, the Wildcats have also maintained a steady defense, giving up four goals a game on average. Junior goalie Brandon Poitras also had a solid season. With 403 saves over 18 games, he ended the season with a .870 save percentage.

Presque Isle’s face-off against Gardiner will be exciting because of their dueling strengths and weaknesses: Gardiner has struggled on offense compared to Presque Isle, barely averaging four (3.56) goals a game.

Meanwhile, its defense has been lights-out: teams have only squeaked out two points against them on average. In seven of Gardiner’s regular-season games, its opponents only scored one point or less, including two shutouts.

If previous matches can tell us anything about the outcome, Presque Isle should be in good shape. On Feb. 14, the Wildcats beat the Tigers 5-4 at home. Yet, there is no doubt this quarterfinal will be one to watch.

Gubernatorial candidate John Glowa said that he wants to spur government reform that truly creates a system of, by and for the people when he visited Presque Isle City Hall.
Pets END_OF_DOCUMENT_TOKEN_TO_BE_REPLACED

There are so many types of personalities when it comes to pets.  “Shy” is a word that some folks use to describe cats and dogs who are fearful. Many times this “shyness” is a fear of strangers, but it can also be fear of being picked up and handled, new places or sudden movements or noises.
What's Happening This Week END_OF_DOCUMENT_TOKEN_TO_BE_REPLACED