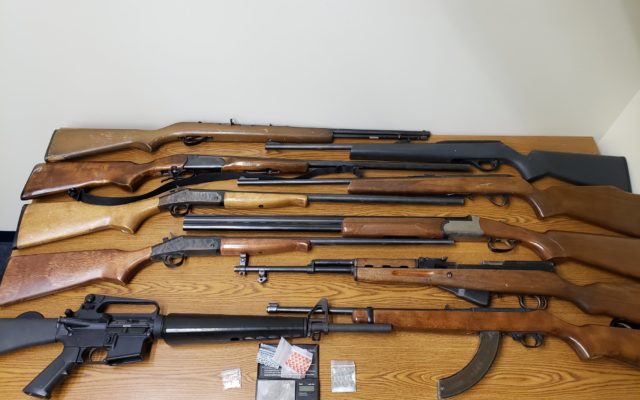 Caribou Police began looking for Price earlier this month after receiving reports from contractors at the new school that someone had stolen tools and construction equipment, along with other personal items.

Caribou Police Sgt. Keith Ouellette had obtained a search warrant for Price’s Madawaska Lake residence on April 15 and, with the assistance of officer Kevin St. Peter, the Maine State Police and the Maine Warden Service, recovered a large amount of the stolen property.

Caribou Police Chief Michael Gahagan said on April 24 that nearly $10,000 worth of stolen property has been recovered.

Price was not at his Madawaska Lake residence while police searched the home, prompting them to alert the public on April 17 that Price was wanted on possible burglary and theft charges.

Officers soon learned that Price had been staying at a residence on Center Limestone Road in Fort Fairfield and requested the Fort Fairfield police’s assistance with executing a search warrant on April 23.

Fort Fairfield Officer Ryan Eagles could see multiple firearms inside the home while he was standing outside, and learned through a background check that the homeowner, 58-year-old Bruce Johndro, was a felon. This allowed Eagles to execute the warrant and arrest Johndro for hindering apprehension of Price and for possession of firearms as a felon.

Once officers were inside, they found 10 firearms and ammunition, along with a small amount of suspected methamphetamine. They also found Price, who had fled into the woods and taken the officers on a brief foot chase. Officers with the U.S. Border Patrol were helped catch Price.

Caribou Police charged Price with burglary, theft and refusing to submit to arrest. He was taken to the Aroostook County Jail in Houltonwhere he remained on April 24. Johndro has posted bail and was released. His court date is set for July 9.

Fort Fairfield Police Chief Shawn Newell said on April 24 that the arrests of Price and Johndro were excellent examples of how working together with neighboring law enforcement agencies and federal partners can lead to the greater good of surrounding communities.

Chief Gahagan thanked the public for their tips in helping to apprehend Price as well as all of the assisting agencies that helped with the investigation.