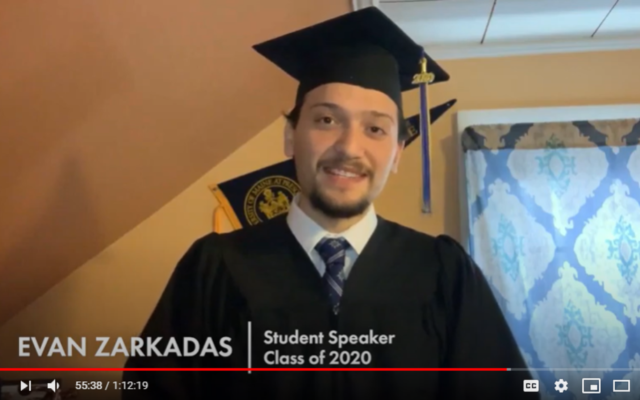 Melissa Lizotte • May 9, 2020
On Saturday, UMPI premiered a virtual commencement ceremony that aimed to help this year’s graduates make the most out of the unexpected circumstances.

PRESQUE ISLE, Maine — Like colleges across Maine and the country, the University of Maine at Presque Isle has been forced to change how faculty, staff and students connect and how to celebrate the Class of 2020 in the age of the COVID-19 pandemic.

On Saturday, UMPI premiered a virtual commencement ceremony that aimed to help this year’s graduates make the most out of the unexpected circumstances.

During the hourlong-plus video, hundreds of graduates, family members and UMPI faculty and staff tuned in to congratulate each other via YouTube’s chat feature and watch the graduates’ names and degrees be called. 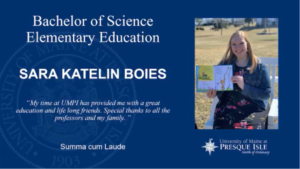 The commencement featured many virtual adaptations to what would normally occur in person, such as a recorded violin performance of the alma mater song “Rise Up, Presque Isle,” and a large Zoom recording of applause played after the naming of the graduates.

But throughout the ceremony was the recurring theme of how the Class of 2020’s accomplishments will always be linked to a historic worldwide pandemic, and likely will fuel their desires to move on with their goals and ambitions.

President Ray Rice, dressed in traditional graduation regalia and speaking from his UMPI office, acknowledged the disappointment that the 168 graduates must be feeling about being unable to experience the full emotions of an in-person commencement.

“Many of us know individuals who have lost their jobs, been displaced from their homes and lost friends and loved ones,” Rice said, in reference to the COVID-19 crisis.

Rice said he wanted to give a message of hope to the graduates and encourage them to use their education to make a difference in their future careers and communities.

He cited both world-renowned and local individuals, such as Dr. Anthony Fauci, Maine CDC director Dr. Nirav Shah, health care workers and the leaders of Aroostook County Action Program, as examples of how education can positively change, and even save, lives. 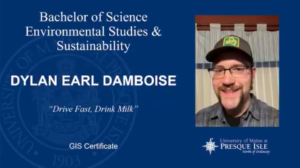 “Think of what you have learned over your career here at UMPI and what you could do with that knowledge, the good you can accomplish, the leadership you can provide,” Rice said. “You, Class of 2020, truly are the hope of our future.”

Despite the virtual format, UMPI maintained many aspects of a traditional graduation, including a performance of the national anthem — sung by UMPI professional adviser and alum Bethany Lord — and speeches from University of Maine System president Dannel Malloy, chair of UMPI’s board of trustees James Erwin, board of visitors member Carl Michaud and chair of the faculty assembly Carolyn Dorsey.

Shaw emphasized that throughout the graduates’ lives, they will face the biggest tests of character during a crisis, not in times of “smooth sailing.” In his own career, Shaw has dealt with the impact of turbulent and tragic world events, including economic insecurity and recessions and the current pandemic.

As the Class of 2020 looks toward their futures, Shaw said, they should remain lifelong learners who are willing to adapt to new and challenging circumstances and never take for granted the power of human interactions. 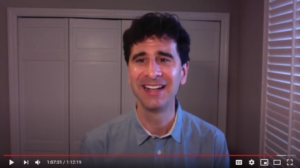 Presque Isle native, playwright and actor John Cariani speaks from his home in New York City as a surprise guest during UMPI’s virtual commencement ceremony on May 9. (Melissa Lizotte | Star-Herald)

“Your generation will see more change than any generation before you. Many jobs will evolve in a steep trajectory of change. Accept change and help lead during those times,” Shaw said. “Aspire to be your best, no matter what you’ll be called upon to deal with.”

After a slideshow that showcased both formal and candid photos of the graduates and officially named their degrees, UMPI history graduate Evan Zarkadas addressed his classmates.

Like the rest of UMPI’s senior class, Zarkadas, a native of Portsmouth, Rhode Island, dealt with the abrupt transition to fully online classes and lost the opportunity to say goodbye to professors and classmates in the traditional ways.

But he expressed gratitude toward his family, friends and the UMPI community members that helped him during the past four years and encouraged graduates to do the same.

“I want you all to take a moment to turn around and to those who are close to you and say to them a huge ‘thank you,’” Zarkadas said. 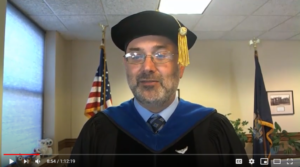 UMPI President Ray Rice addresses the Class of 2020 in a pre-recorded message that was part of the virtual commencement on Saturday. (Melissa Lizotte | Star-Herald)

Cariani saw his own plans interrupted several months ago when the theaters of Broadway in New York City went empty at the start of the COVID-19 pandemic. He was set to act in a revival of the musical “Caroline, or Change” beginning on March 13.

Broadway shut down on March 12.

In addressing the unwelcome changes that have been forced into the graduates’ lives, Cariani urged them to embrace whatever obstacles that arise as opposed to becoming bitter about what might have otherwise happened.