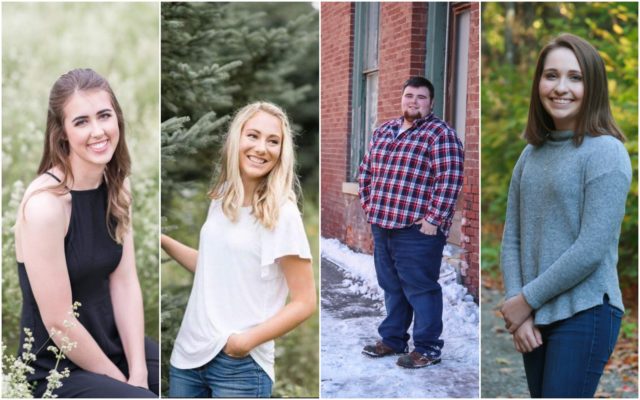 Contributed • May 20, 2020
Southern Aroostook Community School Principal Jon Porter has announced the top students for the Class of 2020.

Stevens served on the student council for three years, serving as vice president her junior year and president as a senior. She has also been named the 2020 Maine Principals Award Recipient, was selected as a Presidential Scholar Candidate and is also a member of Dollars for Scholars for four years.

Stevens has been selected to attend the All-Aroostook Music Festival five times. She plays multiple instruments including alto saxophone, piano, trumpet, baritone horn and is also a triangle enthusiast.

Stevens attends the Bethel Church in Oakfield, where she has been a member of the youth group and worship team. She plays the piano and sings every Sunday. Stevens also gives back to her community through her volunteer work at the church, youth group and the Good Shepherd Food Bank at SACS.

Her future plans are to attend the University of Maine to study in the engineering program. She is the daughter of Sean and Ann Stevens.

She has been a member of the church youth group and worship team for the last seven years. She plays the drums every Sunday morning at church and also at church events, summer camps and at other churches in the area. Canavan has a passion for leading people into worship. She has taken on various roles at the church which include writing original music, helping and leading a prayer group, running social media accounts for the church and  helping design and create content for church events.

Canavan works part-time at the Island Falls Town Office.  Her future plans are to attend Liberty University Online to earn a degree in business administration: digital marketing and advertising and to pursue a career in social media marketing. She also would like to continue to stay involved with some type of ministry work. She is the daughter of Richard and Esther Canavan.

As a senior, Porter was chosen to receive the Daughters of the American Revolution Good Citizen Award. She also was named the Maine winner for the Heisman High School Scholarship Program. Porter was recently recognized as a senior All-Aroostook Scholar/Athlete Award winner. She has been involved in the SACS yearbook and also participated in the SACS Drama Club and has been a member of Southern Aroostook Dollars for Scholars program for the past four years.

Porter has been very active in high school athletics. She played varsity soccer for the last five years, starting as an eighth-grader, and served as captain this past season. She earned All-Aroostook Honors in soccer three times and was named a Senior Regional All-Star this past season.  Porter was also named the Class D Girls Butch Shaw Award winner for her demonstration of outstanding sportsmanship.

Porter played three seasons of varsity softball. She has been part of teams that have earned the Class D Northern Maine Regional Runner-Up awards in 2017 and 2018.  Porter has been named to the Class D All-Aroostook Softball team twice.

She also played varsity basketball for five seasons. In that time, she has been part of three Class D Northern Maine Championships teams in 2018, 2019 and 2020. She has also been part of two Class D State Championship teams (2018, 2019). A three-year captain, Porter has been named All-Aroostook four times, scored more than 1,000 career points, is a two time Bangor Daily News Top Ten Players to Watch athlete, was a three time Class D Northern Maine Tournament Most Outstanding Player, was named by Big Time Sports Website 2020 Girls Player of the Year, participated in the Aroostook Senior All-Star game, named to the McDonald’s Senior Class C/D North All-Star team and has been named to the Bangor Daily News All-State Girls Team Honorable Mention, three times.

Porter has been accepted at Husson University where she will major in exercise science and also plans to earn her doctorate in physical therapy with a future goal to work in the physical therapy field.  She is the daughter of Jon and Jessica Porter.

Grant has given back to his community through his service work, which includes helping with the local food pantry, cutting and splitting firewood for the less fortunate in town,and also giving lessons to area youth during the summer at the Golf for Life Camp.

Grant has worked for O’Reilly Auto Parts for the last two years. He also works for Cam’s Lawn Care, where he has enjoyed working long hours and long nights.

Grant plans to attend Maine Maritime Academy to pursue a degree in power engineering technology and would like to own his own business. His future plans are to travel the world working on onshore power plants. He is the son of Norman Grant and Elizabeth Grant.