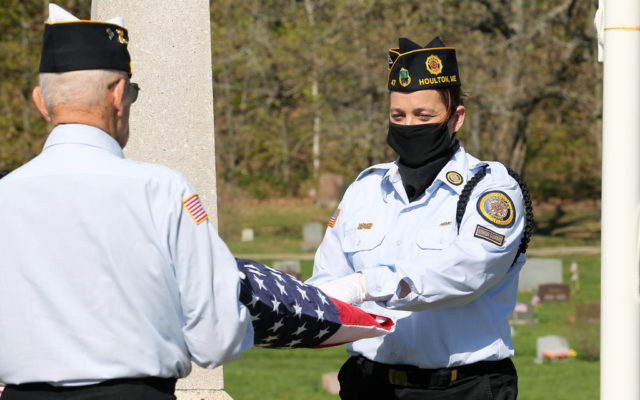 Joseph Cyr • May 25, 2020
It was anything but a normal Memorial Day celebration in Houlton Monday thanks to the ongoing COVID-19 pandemic.

HOULTON, Maine — It was anything but a normal Memorial Day celebration in Houlton Monday thanks to the ongoing COVID-19 pandemic. 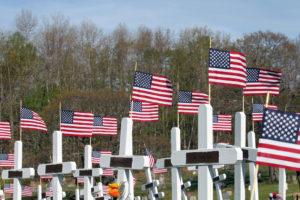 Under normal circumstances, more than 100 people would fill Monument Park to hear guest speakers, enjoy music from the Houlton Middle-High School band and witness a flyover by the U.S. Border Protection helicopter and gun salute by the American Legion Honor Guard.

Following the meeting, the Chester L. Briggs Post 47 of the American Legion in Houlton American Legion Post No. 47 traditionally hosted a free barbecue luncheon for all in attendance.

This year, however, because of the state’s limit of 10 people at public gatherings due to the coronavirus, the American Legion Post No. 47 went with a much more subdued event. A small group assembled at Soldier Hill for a brief ceremony that featured the laying of a wreath and playing of taps.

“On this Memorial Day, it is a tragic, uncertain time,” Jerry Riley of the American Legion said. “But we have a common goal of honoring those who have gone before us in the service of their country.” 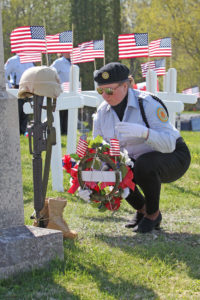 Christy Bartley, sergeant-at-arms of the Ladies Auxiliary for the Chester L. Briggs Post No. 47 of the American Legion, places a wreath at the base of the monument at Soldier Hill in Houlton Monday morning during a small Memorial Day ceremony. (Joseph Cyr | Houlton Pioneer Times)

Edward Lake, commandant of the Marine Corps Detachment 1368 of Houlton, offered a few words to the small group in attendance.

“We are very honored to be here during this solemn time,” Lake said. “It is a time that we all need to show respect to the ones who have gone on before us.”

Memorial Day, or Decoration Day, is a federal holiday in the United States for remembering the people who died while serving in the country’s armed forces, according to military.com. For others, Memorial Day is a time to remember deceased loved ones by planting flowers at gravesites.

Following the ceremony at Soldier Hill, the group reconvened at Riverfront Park to toss a wreath into the Meduxnekeag River. Wreaths were then placed on veteran’s markers at Houlton Community Park.

Additional ceremonies were held in Hodgdon and the Houlton Band of Maliseets veterans complex later in the day.

Just when we thought we were out of the woods with kitten season, it has hit full force.  The past few days have been difficult answering the phone and hearing the stories of why people have litters of kittens they need to surrender.
Campaign Corner END_OF_DOCUMENT_TOKEN_TO_BE_REPLACED