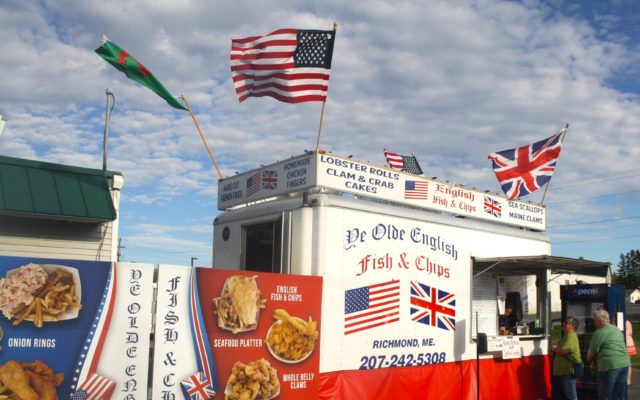 David Marino Jr. • June 9, 2020
There will not be any traditional concerts, fairs or festivals in Presque Isle this summer because of the COVID-19 pandemic. Yet, that is not stopping food trucks from making appearances all over Presque Isle’s Main Street.

PRESQUE ISLE, Maine — There will not be any traditional concerts, fairs or festivals in Presque Isle this summer because of the COVID-19 pandemic. Yet, that is not stopping food trucks from making appearances all over Presque Isle’s Main Street.

Food trucks are mobile restaurants often spotted during Maine’s summertime. Once viewed by the public as novelties of huge metros like Los Angeles or New York City, their popularity has grown precipitously in the last decade, especially after the Great Recession.

Knowledge about food trucks often spreads by word of mouth — many customers rush to hit them before they leave town. In Presque Isle, they are hard to miss, parking themselves at various hotspots along Main Street.

Ye Olde English Fish & Chips owner Wayne Alexander said he had long driven his truck up from Richmond to make an appearance at the Northern Maine Fair. While organizers canceled that event in April, Alexander still wanted to take the opportunity to provide his staple dishes to the “nice people” of Aroostook County.

The truck docked on Main Street in Presque Isle from May 20 to May 30. Alexander said business seemed to have increased because many restaurants remained partially or entirely closed to dine-in services. On Memorial Day, several people — including many families and couples — ate the shop’s seafood on nearby picnic tables.

The shop’s signature dish is, of course, its fish and chips. Being a native of Wales, Alexander knows the English recipe well. He even flies his home country’s flag — distinguished by its enormous red dragon — from his truck. He also sells fried clams, scallops, chicken fingers and onion rings.

Seafood is not the only option for Presque Isle residents. Rib Truck is a phenomenon familiar to many in The County: it periodically parks itself in Presque Isle, Caribou, Fort Kent and Madawaska. Late last month, you could find it in Presque Isle across from Marden’s.

John Freeman, who owns the business with his wife Mary, said that food trucks had become especially popular in the last four or five years — a wave they have been happy to ride.

For 24 years, the Freemans have provided County residents its specialized brand of barbecue right from its truck. One of its popular items is known as a “parfait,” which features a helping of pulled pork smothered in baked beans and barbecue sauce. A Facebook commenter vividly described the dish as “meat from the gods of heaven” with “beans straight from the angels.”

John Freeman said his business was doing well in light of the pandemic, though issues related to COVID-19 had delayed the truck’s opening by three weeks. Wearing masks while they cook and serve, he said the Freemans had downsized the menu — it does not currently include ribs, for example — and employed social distancing, while working hard to keep prices affordable.

“We’re not going to please everyone, but we’re going to be okay,” Freeman said. “Our fans can expect to see us selling BBQ streetside for many years to come.”