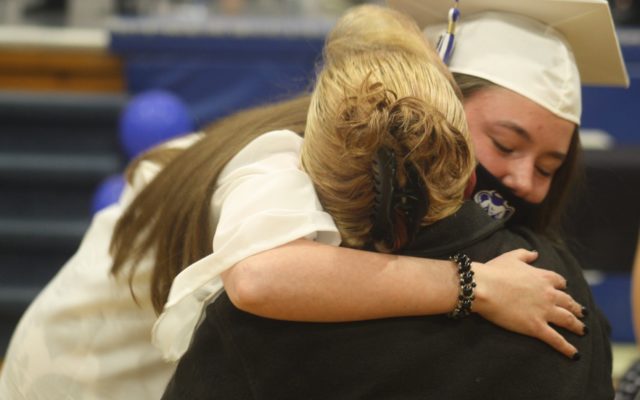 David Marino Jr. • June 10, 2020
It was an emotional farewell for Easton Junior/Senior High School’s close-knit group of 18 seniors, brought together for the first time in three months for an in-person graduation ceremony on Friday.

EASTON, Maine — It was an emotional farewell for Easton Junior/Senior High School’s close-knit group of 18 seniors, brought together for the first time in three months for an in-person graduation ceremony on Friday.

Easton held two identical ceremonies at 5 and 7 p.m. The school also held a town-wide motorcade between the sessions, with residents from across Easton congratulating and supporting the graduating students. 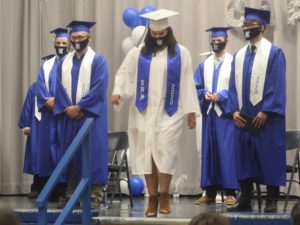 An Easton Junior/Senior High school student walks down to grab her diploma in a graduation ceremony in Easton on Friday, June 5. (David Marino Jr. | The Star-Herald)

Students sat in chairs on stage, each donning an Easton Bears facemask. A bare-bones staff called each graduate down to pick up the diploma from a table. A professional photo to commemorate the occasion was taken of each graduate, in what was the only time that most students removed their masks during the ceremony.

The class’s motto was written across the stage’s backdrop: the Latin phrase “carpe diem,” often translated as “seize the day.” The Class of 2020 speakers did seize the day under the circumstances, with emotional speeches celebrating its many years in school and its march into adulthood.

Class president and second honor essayist Kassidi Hanson said Easton High was a “special school” that had pushed her and her classmates to do great things.

“We have been through so much together,” Hanson said. “Argued, laughed and stuck by each other no matter what.”

As she wished her 17 peers luck for the future, Hanson said they should not let the pandemic distract from their accomplishments over the last several years. She said recent adversity would only make her class stronger in the end. 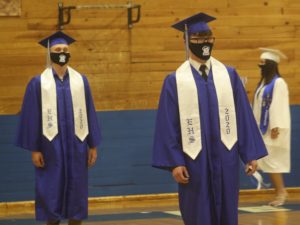 “If we can get through a pandemic of all things, I’m sure we will be able to conquer anything,” Hanson said.

Cecilia Morin, the first honor essayist, said she was honored to be a part of Easton’s 2020 class. She saw great potential in her classmates as they moved on to begin their careers.

“Among us, there are future teachers, lawyers, artists, historians and so much more,” Morin said. “The possibilities will be endless.”

Salutatorian Lila McCrum spoke about the personal growth she had experienced in her time at Easton. Comparing her situation to how baby eagles learn to fly, she said her parents and classmates had helped her prosper academically and socially despite her shyness.

McCrum said academics had never been easy for her, having to work hard for each goal she set for herself. She was ultimately proud of her accomplishments as well as those of her classmates.

“The Class of 2020 and I are ready to stretch our wings, take that step and learn to fly,” McCrum said. 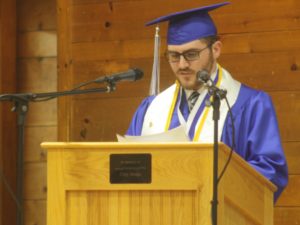 Valedictorian Colton Harding focused on three qualities of human nature in his speech, reflecting how his class had shown or handled each.

Harding said that he and his classmates had been struck by the first attribute — fear — many times throughout high school. Often it was a test or project. But lately, it had been a more serious fear: how they would handle the uncertainty brought by the COVID-19 pandemic.

In the face of a global pandemic that radically changed their way of life, Harding said his class had shown the second attribute — perseverance.

“It was our perseverance that drove us on through the dark and gloomy fog of these trying times,” Harding said. “Without perseverance, we wouldn’t be standing here tonight.”

Finally, through ultimately overcoming the dire situation around them, the class had shown the third attribute — courage — and they were all the stronger for it. While these trials may not be comfortable, Harding said they provided lessons that will last a lifetime.

After the student speeches, Principal Mark Stanley and Guidance Counselor Lynda Foren-Turner handed out awards and scholarships to several students. Stanley said the total amount presented in scholarships that day numbered $148,050, more than $8,000 per student. 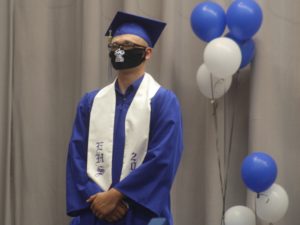 An Easton Junior/Senior High Schools student stands on stage in his Easton Bears facemask in the school’s class of 2020 graduation on Friday, June 5. (David Marino Jr. | The Star-Herald)

In his address, Stanley reflected upon what the 2020 class could learn from the COVID-19 pandemic. He recalled how he “heard cheers down the hallway” when he announced a half-day on Friday, March 13. He had no idea it would be the last ever in-person session for the 2020 class.

He said this — and other uncertainties that have occurred as events changed rapidly in the last few months — had left a clear message to students about how to live their lives.

“Let’s live our lives not knowing what tomorrow holds,” Stanley said. “Live in the moment with focus and passion, and more care for our loved ones than yesterday.”