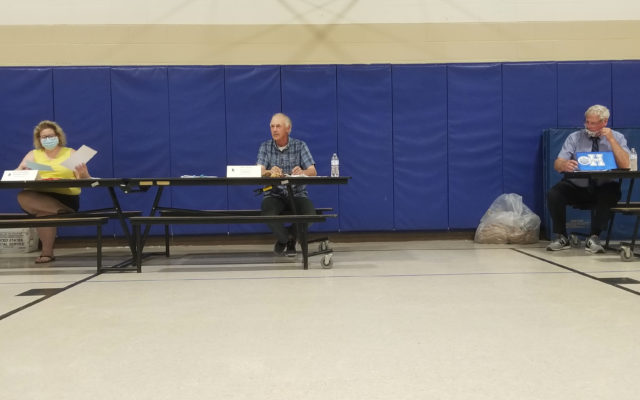 Joseph Cyr • June 9, 2020
The SAD 70 school board approved a revised budget on Monday after the district learned it would receive a bit more money from the state.

HODGDON, Maine — The SAD 70 school board approved a revised budget on Monday after the district learned it would receive a bit more money from the state.

Holding its first in-person meeting since the outbreak of COVID-19 back in March, board members were spaced around the Hodgdon Mill Pond gymnasium to ensure safe distancing practices were observed. Board members and guests were provided with masks, if they desired to wear them.

At $7,123,407, the total school budget is an increase of $486,917 over the current fiscal year. The good news for residents is that the actual impact to taxpayers will be less. The board initially approved its budget in May, but recently learned it would receive slightly more money from the state.

“We received notification that we were receiving $3,600 more from the state,” SAD 70 Superintendent Stephen Fitzpatrick said. “So we have deducted that amount from the local [tax] expectation.”

Because the district is spending above what the state says it should be for Essential Programs and Services, residents must also contribute $471,518 in additional local funds to help balance the budget.

Like many other school districts, teacher salaries are the driving force in the increased budget. Teacher salaries are up $47,093, while benefits/insurance is up $30,214. In addition, the district plans to spend an additional $41,000 for new textbooks.

Funds will also be raised for paving the high school parking lot and widening the girls soccer field to make it regulation-size.

Voters will meet at 7 p.m. Monday, June 29, at the Hodgdon Middle-High School gymnasium to discuss and vote on the plan. Voters will also cast final ballots for the budget during the special July 14 primary referendum elections.

The Houlton Pioneer Times previously reported the total budget was $6,823,407, based on information provided by the district. Those numbers, however, were not correct.