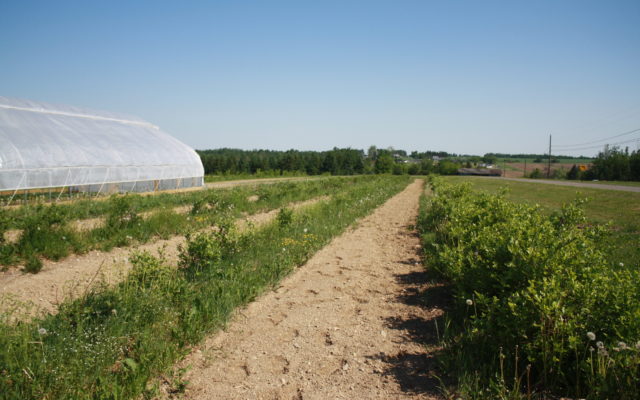 CARIBOU, Maine — For two years, Micmac Farms in Caribou has seen an increased presence of bees, butterflies, moths and other insects known as “natural pollinators,” whose pollination of blossoming plants has helped produce successful summer crops.

In June 2018, Micmac Farms worked with the Central Aroostook Natural Resources Conservation Service to set aside three of its 15 acres specifically to attract natural pollinators.

Every year since then they have planted seeds for crops such as dogwood, buckwheat flowers, partridge peas, sunflowers, aster flowers, blueberries and raspberries that have grown especially well thanks to pollinators.

Farm manager and environmental specialist David Macek said that although the project has not been conducted long enough to estimate potential long-term benefits, he has seen positive short-term effects on crops.

“We have noticed a larger number of bees and hover flies, which mimic bees for protective purposes,” Macek said.

According to research conducted by the University of Maine Cooperative Extension, there are 270 species of native bees in Maine but habitat loss and fragmentation, pesticides and diseases have caused population declines.

In 2019, Micmac Farms hosted 31 youths from the Intertribal Agriculture Council to conduct research on the native pollinator habitat. The group identified and studied 18 species of insect pollinators, nine of them bees, along with Eric Venturini, a biologist from Central Aroostook NRCS who helped begin the habitat.

Macek credits the farm’s location and avoidance of pesticide chemicals as potential reasons for the habitat’s success.

“We’re isolated from other large farms in the area because there’s plenty of trees around,” Macek said. “[The habitat] has become a little sanctuary here for the bees and other pollinators.”

Most of this year’s summer crops have not yet bloomed, but pollinator insects are already being spotted on the farm. Macek noted that Micmac Farms has thought about raising colonies of honey bees, which are credited with pollinating numerous important U.S. crops such as berries, broccoli, melons and apples.

For those who wish to grow gardens that serve as pollinator habitats, Macek recommends starting with flowers such as aster, goldenrods and dogwood and fruit such as eldercherries, apples and plums.

Many bees will sometimes live in the stems of flowers or burrow in the ground, so creating a pollinator garden also provides them a stable habitat. He emphasized that despite their reputation as attackers, most bees will not sting people unless provoked. Unless a person is allergic to bee stings, there is no reason to be afraid if a bee comes near while they’re gardening.

People who are less fond of bees, he said, can still enjoy other insects that frequent pollinating plants, including butterflies.

“Most natural pollinators live solitary lives. Bees in hive populations are the ones that tend to sting more,” Macek said.