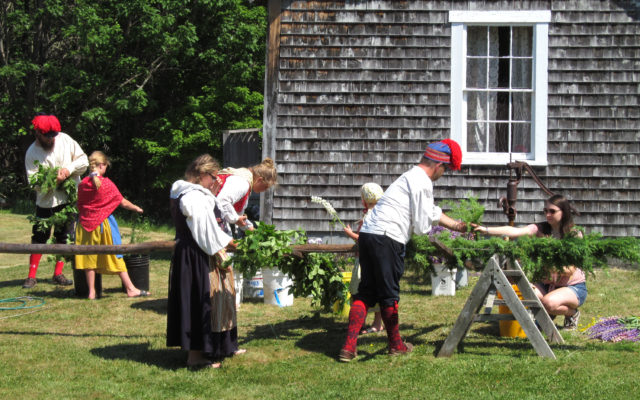 Chris Bouchard • June 26, 2020
New Sweden’s annual Midsommar festival was significantly reduced in size due to the COVID-19 pandemic, but a couple of Swedish families came together to ensure the tradition was still upheld.

NEW SWEDEN, Maine — New Sweden’s annual Midsommar festival was significantly reduced in size due to the COVID-19 pandemic. But a couple of Swedish families came together to ensure the tradition was still upheld, albeit on a much smaller scale and within social distancing guidelines.

New Sweden Midsommar Co-Chairperson Brenda Jepson said the event typically pulls in hundreds of guests across the state and country, and that they officially canceled the main festival while encouraging friends and relatives near and far to participate in a “Virtual Midsommar” during the June 19-21 weekend.

Jepson shared traditional Swedish recipes on the New Sweden Historical Society Facebook page and other organizers posted how to create a Midsommar Pole out of a trimmed tree, tamarac, birch and lupines. People were encouraged to share photos of their food and celebrations on social media. 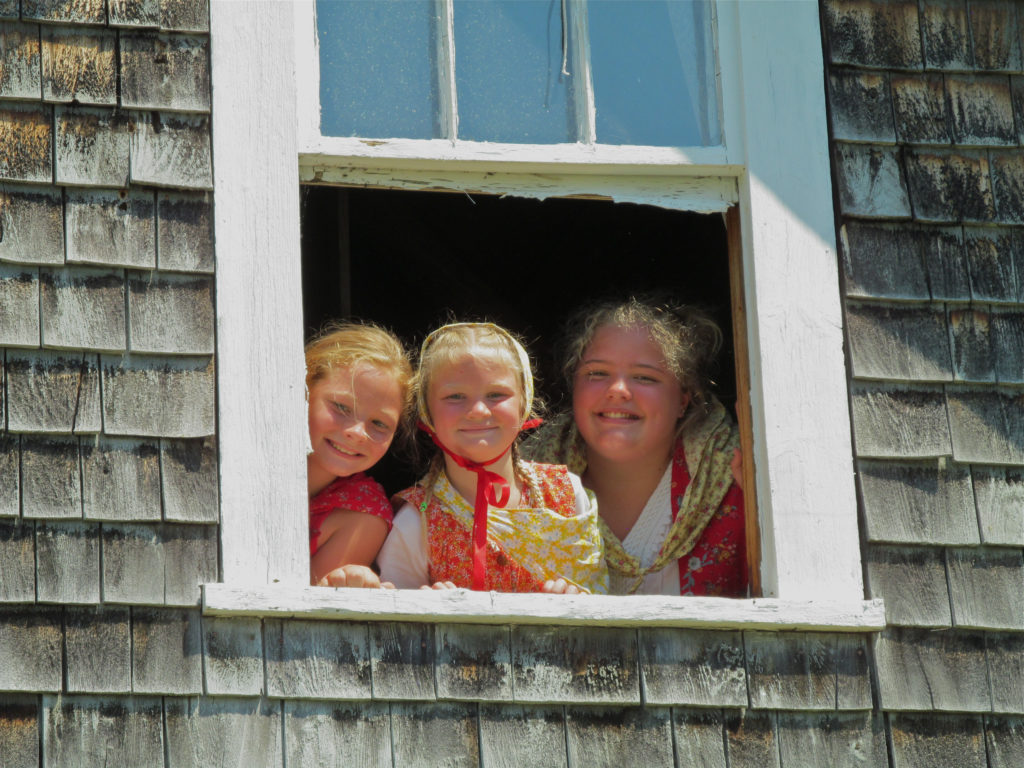 Peterson sisters are pictured here looking out the window of Lindsten Stuga during a socially distanced Midsommar celebration in New Sweden. The three Peterson daughters took time to explore the Lindsten Stuga and to have fun while watching their parents and the Bondesons finish decorating the Midsommar Pole. (Courtesy of Brenda Jepson)

As part of the virtual festival, a two and a half hour video of the 2018 festival shot by George Benson of Presque Isle, who is also of Swedish descent, was prepared and uploaded to YouTube by Bill Duncan of Madawaska Lake, allowing those missing out on the festival to relive the 2018 event.

“At the time George Benson filmed our festival, we were so grateful, but we had no idea how special this footage would be only two years later when our festival would be put on hold,” Jepson said earlier this month.

When Midsommar weekend came, Jepson said she and a group of fewer than 30 people convened to set up the Maypole and to recreate some of the Midsommar traditions on a smaller scale. 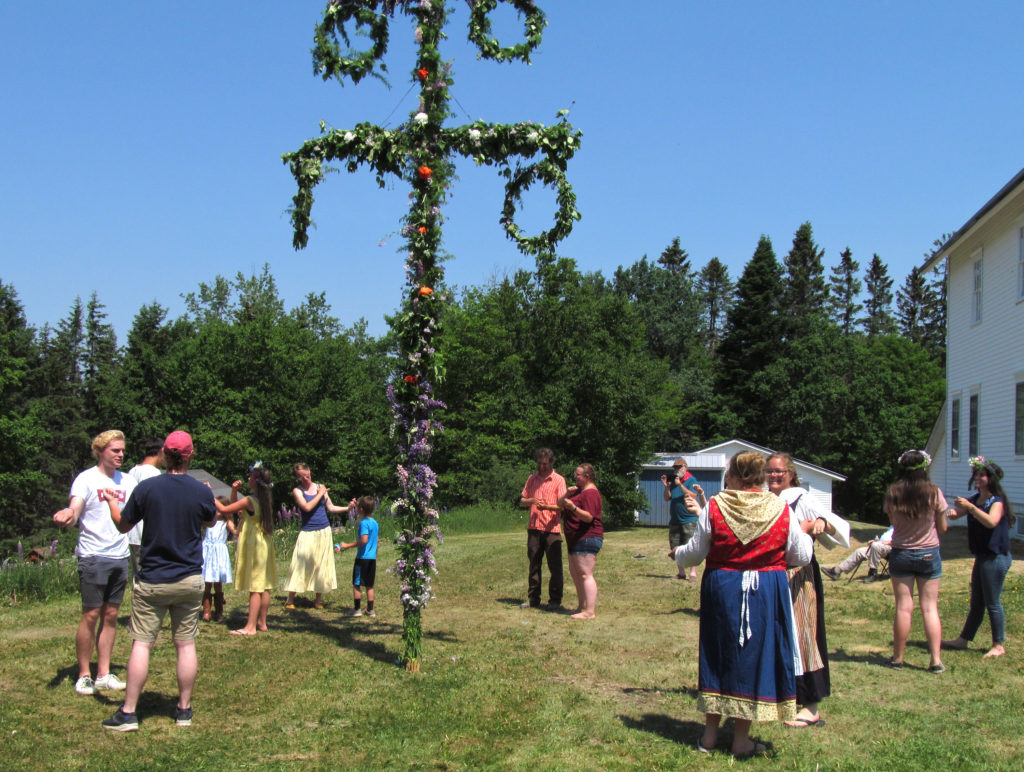 A small group is pictured here dancing around the Midsommar Pole during a socially distanced Midsommar festival that was closed to the public. To ensure everyone’s safety, Lukas Lagasse introduced “Distance Dancing.” There was no holding hands around the Midsommar Pole, but family members from the same household were encouraged to dance together. In the foreground, Lukas teams up with his brother Lance, left, and Kristi Peterson dances with her daughter, Ilsah,to the right. The Germaine family is also pictured dancing. (Courtesy of Brenda Jepson)

Jepson said the small celebration was not advertised or open to the public, and that it was primarily two Swedish families, a small group of musicians, and a handful of others in attendance.

“The reason we didn’t put it out there was because we were afraid we’d get a large crowd,” said Jepson. “We were very truly worried about that, so the only way we thought we could pull it off was to keep it secret, which is kind of what we did.”

Jepson took photos of the event and shared them on the New Sweden Historical Society Facebook page as part of the Virtual Midsommar event.

“So many people who usually attend live downstate and all around the country,” she said, “and we had such a fantastic response to our virtual Midsommar.” 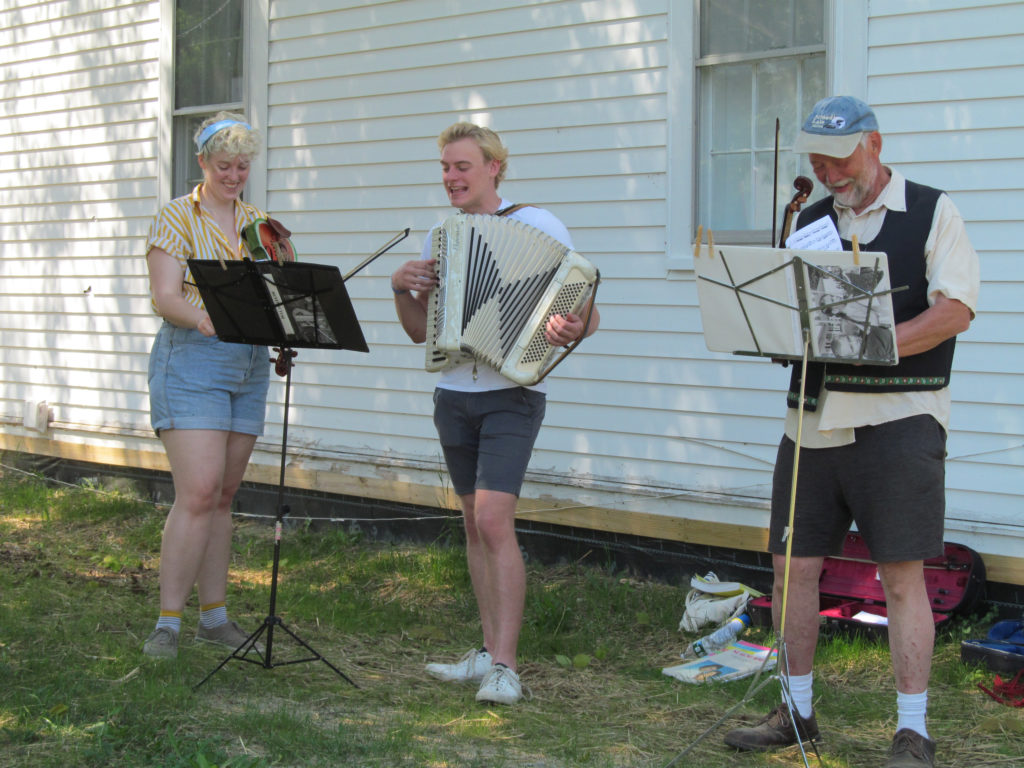 Elyse Kiehn, Lukas Lagasse and Stephen Boody played all the familiar and well loved Swedish tunes as the Midsommar Pole was decorated. (Courtesy of Brenda Jepson)

Jepson said that some were unhappy that the event was not made public, but all planning was done with immense caution to ensure that people were safe while also upholding the town’s 150-year Midsommar tradition.

“We didn’t want anything to happen to anyone or for people to get sick afterward,” she said, “which is why we had to officially cancel the festival. We have so many elderly people in our community and they are so involved in making food and doing much of the work; we just couldn’t put them at risk.”

Jepson said New Sweden resident Sven Bondeson was determined to put up the Maypole and to celebrate the festival in some way.

“His claim to fame is that he is known to the community as the last full-blooded Swede in New Sweden,” said Jepson. “He’s pretty proud of his heritage.”

Jepson said she was at first apprehensive about taking photos after announcing that Midsommar was canceled, but in doing so she was able to document the unique event and share the photos online as part of the virtual celebration.

“It was beautiful,” she said. “There were very few people there, and they just did a beautiful job. Everybody helped out and had a function, and thousands saw the Maypole on our Facebook page this year.”

Ultimately, she said she hoped the photos of the small festival would boost community morale during troubling and uncertain times.

“The pictures were quite special because of this situation,” she said.

Prior to the festival, volunteers visited separate locations to gather materials for the Maypole, but once it was up Jepson said she was worried that people would all gather close together and dance around it — a significant part of the Midsommar tradition.

One guest came up with an idea for “distance dancing,” Jepson said, in which people from the same family or who live in the same household could hold hands or dance together. People from different families or homes stayed six feet apart.

Jepson said she and local organizers are currently planning to host the town’s official 150th, or hundra femtio, next year.

And while this year’s event was on a much smaller scale, Jepson said it was important that some form of celebration occurred, especially during such a landmark year.

“It was our 150th year of New Sweden,” she said, “and this has been celebrated every single year. If you look back in old historical journals, maybe they couldn’t do much because times were rough and they had to concentrate on survival, but they still did a few things to honor Midsommar.”