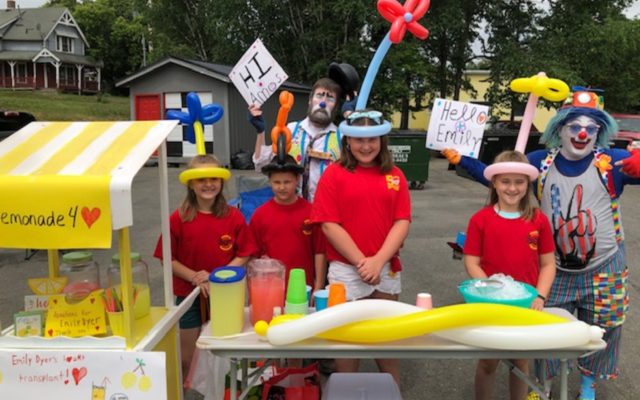 Chris Bouchard • July 8, 2020
For the past month area youths have been setting up lemonade stands to help fund a heart transplant for Emily Dyer of Woodland. So far, they’ve raised more than $2,000.

CARIBOU, Maine — For the past month area youths have been setting up lemonade stands to help fund a heart transplant for Emily Dyer of Woodland. So far, they’ve raised more than $2,000.

Holly Rhinebolt of Caribou said that Dyer, who is a family friend through their church, suffered a massive heart attack on June 6 and that she is currently in Boston awaiting a heart transplant. In response, Rhinebolt said two of her daughters’ classmates, Morgan and Meredith Lahey, started a lemonade stand in early June.

Rhinebolt’s daughter, Michaela Rhinebolt, was inspired by this and decided to hold her own lemonade stand in mid-June with her friend Benson Belanger.

Word of their selfless efforts began to spread through the community, and Burger Boy owner Dustin Mancos soon invited all four to host a lemonade stand outside his restaurant on July 3.

“He’s a great guy,” Rhinebolt said. “He does a lot for the community and likes to see young people helping others.”

“I think it’s the coolest idea ever,” Mancos said. “I started small and, seeing kids selling lemonade, I hope they pursue something bigger.”

Mancos reached out to the city’s local police and fire departments, who both made an appearance with an ambulance and police cruiser.

Rhinebolt said the Lahey twins brought in a couple Shriner clowns and that Mancos also provided the kids with T-shirts.

“It was just a busy and beautiful day,” Rhinebolt said. “The community was so supportive.”

A benefit supper is planned for Dyer 4-6 p.m. on July 16, at the Woodland Consolidated School.

“Emily’s class from Caribou is starting that, and asked the kids to bring the lemonade stand out to Woodland,” Rhinebolt said. “So we’re going to hit the road again.”

So far, Rhinebolt said these efforts have received an overwhelming amount of community support.

According to Rhinebolt, Dyer has already undergone one successful surgery, and that she may even be able to return home in three to four weeks, at which point she will await the heart transplant.

Anyone interested in making a donation can contact Erica Boyles at KeyBank in Caribou, Rhinebolt said, adding that Boyles will be able to ensure that donations get into the right account for Dyer’s family.

Mancos said he would absolutely be receptive to the lemonade stand returning to Burger Boy in the future.

“I’m always open to opportunities that benefit the community, and I support them 100 percent with everything they do,” he said.

Members of the Houlton Band of Maliseets will head to the ballot box in order to determine who will be elected as their new tribal chief.
Pets END_OF_DOCUMENT_TOKEN_TO_BE_REPLACED