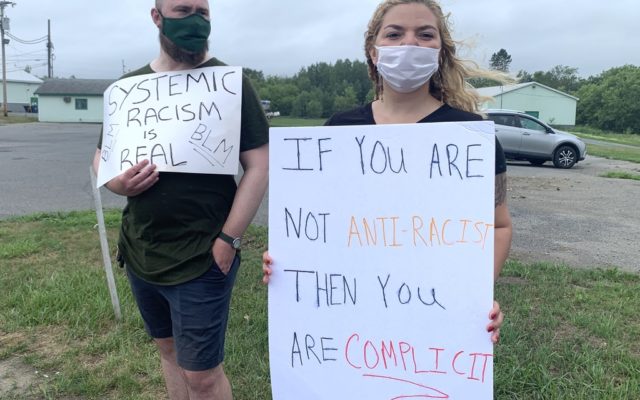 David Marino Jr. • July 15, 2020
In most of Maine, Black Lives Matter protests have fizzled out as the summer progressed. Yet, a demonstration in Presque Isle on Saturday, July 11, showed that many in this traditionally conservative city remain passionate about fighting police brutality and racism.

PRESQUE ISLE, Maine — In most of Maine, Black Lives Matter protests have fizzled out as the summer progressed. Yet, a demonstration in Presque Isle on Saturday, July 11, showed that many in this traditionally conservative city remain passionate about fighting police brutality and racism.

About a dozen protestors called for justice for George Floyd and an end to systemic racism, while holding up their large cardboard signs for two hours on Saturday, across from the Aroostook Centre Mall.

The protest is part of a nationwide movement that has erupted since the death of Floyd, a Black man who died in Minneapolis Police custody on May 25. Prosecutors have since charged Officer Derek Chauvin with second-degree murder after he was filmed kneeling on Floyd’s neck for several minutes.

Protesters have been gathering in Presque Isle every Saturday since, and there are no plans to end the demonstrations.

Organizer Otis Edgecomb of Fort Fairfield said it was vital that he and other protesters continue to broadcast their message to the public, especially when many were distorting and corrupting the goals of the Black Lives Matter movement.

He said opponents of the movement had tried to undermine its message by changing the narrative about Floyd, including by bringing up Floyd’s criminal record. Floyd spent time incarcerated before his death in May, including on drug and robbery charges. He was last sentenced in 2009.

“Instead of saying ‘Justice for George Floyd,’ they peg George Floyd as a thug, so that [his death] was somehow deserved,” Edgecomb said.

While Edgecomb continues to call for an end to systemic racism in policing nationwide, he has praised departments in The County, including police in Presque Isle and Fort Fairfield, for their use of de-escalation tactics.

He said police reform instituted in Maine has put the state far ahead of other states struggling to contain outrage over police brutality. 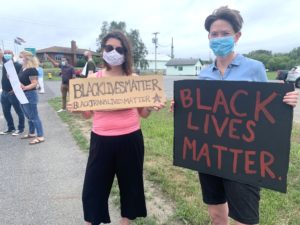 It was just another Saturday for Sarah McLean of Presque Isle, who had been going to the protests since they began in late May.

McLean said it is not only policing that needs reform, but the entire power structure in the United States, which she said is inherently oppressive against people of color and especially Black people.

“If that doesn’t change, then policing isn’t going to change,” McLean said.

Kelsey Park of Auburn is staying with family in Presque Isle because of the pandemic. She had learned about the protests through the We the People of Aroostook Facebook page — a place of discussion and organizing for County residents interested in social justice issues like Black Lives Matter.

Park said the Black Lives Matter movement was the culmination of decades of calls from communities of color for a more equitable justice system.

Like many in Saturday’s group, including Edgecomb and McLean, she said President Donald Trump is fanning the flames of the issue through his statements on Black Lives Matter and race.

“I do think there’s a particular energy around there being more attention toward the presence of white supremacy and needing to counteract that,” Park said.