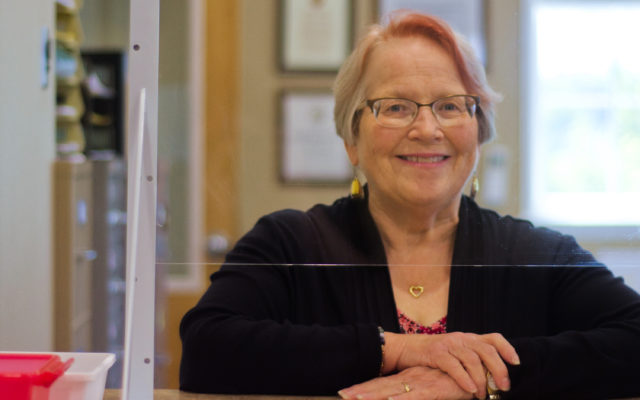 Chris Bouchard • July 23, 2020
Caribou City Clerk Jayne Farrin will be retiring on Aug. 3, having served the city for a total of 13 years, with 10 as the city clerk and three as a deputy city clerk.

CARIBOU, Maine — Caribou City Clerk Jayne Farrin will be retiring on Aug. 3, having served the city for a total of 13 years, with 10 as the city clerk and three as a deputy city clerk.

Farrin grew up in Harmony, just 50 miles out from Bangor, and began her career as the Exeter town manager in 1982 — a town that, much like most of Aroostook County, is known for its potato farms.

Seeking a change in her life, Farrin moved to Van Buren in 1991 where she accepted a position as the town manager.

She said she gave up her job at this time and took on the new job of raising her two sons, Thomas and John Freeman.

“My husband worked as the superintendent of the utilities district,” she said, “and we wanted children, so I gave up my job.”

Farrin then worked part-time at various jobs, including a tutoring position at SAD 1.

In 2007, Farrin sought full-time work so she could provide health insurance for her family after her husband retired, and was hired as a deputy city clerk by Caribou City Clerk Judy-Ann Corrow.

“I’m forever grateful to Judy for hiring me,” she said. “I cannot stress this enough. I am forever grateful that I was able to provide for my family, and I’ve enjoyed the clerk world — even though I started in town management,” adding that she felt much more at home as a clerk than as a municipal manager.

“I love doing genealogy and helping people find their roots,” she said. “I enjoy running elections; they’re stressful, but running fair and secure elections is really the most important thing I do.”

On May 1, 2010, Farrin became Caribou’s city clerk, and has held the position for a little more than a decade.

Farrin said that one of the most notable changes during her time as clerk was the city office renovation in 2016, which combined the front desk with the clerk’s office.

“I put in my resignation letter that that was one of the more lasting impacts during my time here,” she said. “I pushed to combine the two offices and I think it serves taxpayers and residents best now that we’re all together.”

Farrin has worked under three different city managers: Steve Buck, Austin Bleess and Dennis Marker. She said all have been different, but that they are all good people.

She said she and her colleagues have had plenty of good times throughout the years, participating in the Caribou Cares About Kids parade, putting together fun videos with staff, attending picnics and celebrating birthdays, all of which helped her and colleagues bond over the years.

Farrin ran her last election for the city earlier this month on July 14, and said it was a good trial run for the upcoming November presidential election.

Being the city’s first election held during a pandemic, the July 14 election had a couple more staff than normal, with one being dedicated to cleaning and disinfecting booths throughout the day.

Farrin commended the recreation department’s hard work in hosting and assisting with the election.

“They were exceptional,” she said. “We used cones and markers to show where voters could go and it worked very well. The candidates had no problems outside and workers never fussed about wearing a mask or face shield.”

The election had 600 absentee voters and a total of 1,348, which included absentee and walk-in voters — far more than the last two primaries held in Caribou.

She said one of the most interesting points in her career was when a group of residents formed a committee to secede from the city to form a new town town based in the rural areas of Caribou — something that she said is not at all common in most municipalities.

The charter commission, which changed the city’s charter, also happened during her time and she noted that this is also a relatively unique occurrence in municipalities.

Farrin said she wanted to visit her youngest son John, who is now 23 and living in Wisconsin, but the pandemic put these plans on hold. Her oldest son Thomas, who is now 26, recently moved back home with his girlfriend over the summer, as he is able to work remotely.

“I wanted to try my darndest to get out and visit with John,” she said, “but I’ve been very fortunate to have Thomas home all summer.”

Farrin said she is confident that Danielle Brissette, the incoming city clerk, will be a good fit for Caribou, adding that the city will be in good hands after she retires.

“I’m going to miss the people,” she said. “Caribou has been very friendly.”